Chai Ploentham wants you to think of his restaurant, Zenwich, as a deli first and foremost. That's not difficult to do when you open your bag and pull out a beautifully butcher-paper-wrapped sandwich, sliced in half, and begin to tear into its contents. Crusty ciabatta bread adorned with mayo-dressed chiffonade lettuce makes you think, at first glance, that you're about to enjoy an East Coast-style hoagie.

However, the first bite makes you realize this is something entirely different. Instead of the typical deli cold cuts, you're greeted with the subtle crunch of battered shrimp and garlicky bread crumbs. And the lettuce is no iceberg but instead a verdant mix of peppery arugula and cilantro, all dressed in a sweet chili sauce aioli. There are echoes of both a banh mi and a shrimp po'boy, making you unable to pinpoint exactly what genre of food you're eating. Whether it's a deli, a Pan-Asian café or a fusion fast-casual spot doesn't matter — which is exactly the sort of boundary-transcending experience Ploentham was going for.

Ploentham recognized Zenwich's potential to reframe how we think about delis the moment he walked into the original location in Elmhurst, Illinois, about four years ago. He had just moved to Chicagoland for his wife's job and was taking in the area's food scene when he happened upon the small, quick-service restaurant. True to his nature, he got to talking with the owner about how much he enjoyed the food and continued those conversations as he became a Zenwich regular. Eventually, the owner confided that he was looking to sell the restaurant and wondered if Ploentham had any interest in buying it. Seeing his chance to take a successful concept and grow it into a multi-outlet brand, he agreed and took over that original Elmhurst spot in 2018.

This was not the first time Ploentham had been approached to buy a restaurant. In fact, the first time it happened was the push that sent him down the path to becoming a restaurateur. A Bangkok native who came to St. Louis for college, Ploentham began working in a restaurant to make some money and fell in love with the business — so much that when he was finished with school, he decided to go into the business full time. That job, with Sen Thai, took him to Las Vegas for a year, and when he returned to St. Louis, he decided that he was ready to open a place of his own.

While in Las Vegas, he had the idea for an all-you-can-eat sushi restaurant and figured it would work well in St. Louis. He opened that space in 2008 and found a good amount of success in it. However, he was eager to learn all that he could about the restaurant business and reached out to the owner of the neighboring Japanese restaurant, Seki, to see if he could stage during the day to expand his knowledge. The owner agreed, and before he knew it, Ploentham became an integral part of the Seki team — so integral that when the owner decided he wanted to sell the restaurant, he offered Ploentham the chance to buy it.

Ploentham closed his all-you-can-eat sushi restaurant and bought Seki in 2011, converting it into the popular Japanese cuisine, ramen shop and cocktail spot Blue Ocean. Even after leaving for the Chicago suburbs four years ago, he continued to run the restaurant, traveling back to St. Louis several times a month to keep everything on track.

Because he was in town so frequently and was familiar with the area, it made sense that he'd eye St. Louis as the first place to expand Zenwich. In January 2020, he signed a lease for a storefront in the Central West End and was prepared to open in April until the COVID-19 pandemic upended his plans. Even so, he needed to pay rent on the space, so he decided to open in June of last year and make as good a go of it as he could.

It turned out that Zenwich was the perfect template for pandemic dining. The restaurant is fast-casual, set up to do delivery and carryout, and even used QR codes for ordering as part of its model before they became ubiquitous. Ploentham admits it hasn't been easy — the restaurant is getting busier by the day, and he's even preparing to start licensing the brand — but he believes in what he is doing because he believes in the product.

The aforementioned Spicy Garlic Shrimp sandwich is proof of why he's so bullish about the Zenwich brand — and it's far from the only piece of evidence. The menu is comprised of similarly global-influenced sandwiches that inspire double takes because of all of the unique flavors going on between those two slices of ciabatta. The Chicken Teriyaki Katsu, for instance, is a stunning, Japanese-inflected take on the fried chicken sandwich craze. A thin, panko-encrusted chicken cutlet is stacked onto the crusty bread with housemade cole slaw, romaine lettuce and teriyaki sauce. What's most notable about the dish is how restrained it is. The chicken is crisp but not greasy, the teriyaki sweet but not sticky. The balance is impressive.

The Thai BBQ Pork Belly is outrageously good. Here, succulent, thick round slices of the meat are glazed in a sweet soy sauce, then layered with pickled vegetables, cilantro and sweet and spicy mayo that soaks into every crevice of the sandwich. The sweet pickled cucumbers are essential, cutting through the richness of the meat and sauce. 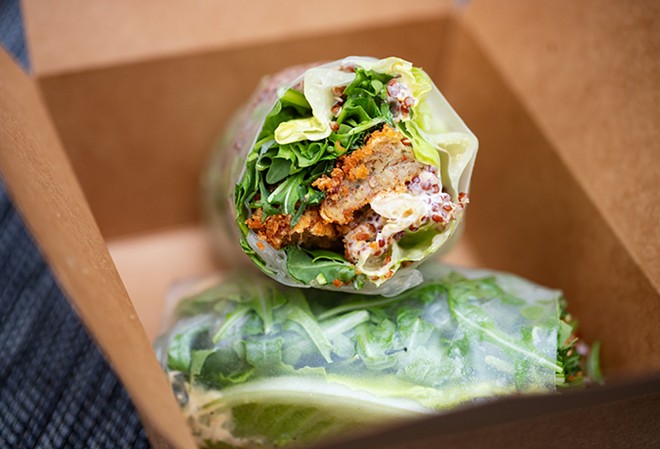 Zenwich's signature sandwich is its Korean Cheese Steak — and rightfully so. Thick hunks of ginger, soy and sesame-marinated brisket evoke the flavors of bulgogi, while caramelized onions, mushrooms and gooey mozzarella cheese embody the quintessence of a Philly. Your mind doesn't know exactly how to categorize what you're eating — Korean barbecue or an East Coast sub — but the flavors are so wonderful it doesn't really care.

The St. Louis location of Zenwich is the only outlet to have ramen, which Ploentham learned to make at Blue Ocean. The Garlic Pork Bone version is laden with his impossibly tender pork belly, bamboo scallions, radishes and delightfully funky black garlic oil. This all simmers in a rich pork bone broth that is as powerfully porcine as rendered bacon fat, but not at all greasy.

The Mentaiko Ramen is another genre-bending dish. Instead of the oft-seen broth-based noodle soup, this dish is akin to Japanese carbonara. Al dente noodles are tossed in a fish roe cream sauce. Parmesan cheese and breaded shrimp top the noodles, creating a decadent, sea-forward pasta that is like eating Japanese food in Rome. Or at an Italian restaurant in Osaka.

Ploentham is here for it. As he likes to say, Zenwich feels personal to him as an Asian American — the multiple identities that exist inside of him make him who he is, and he is proud to celebrate every facet of himself. He sees his restaurant as the culinary equivalent — one that we are lucky to get to experience.