With The Goat, or Who Is Sylvia? St. Louis Actors' Studio blows the barn doors off 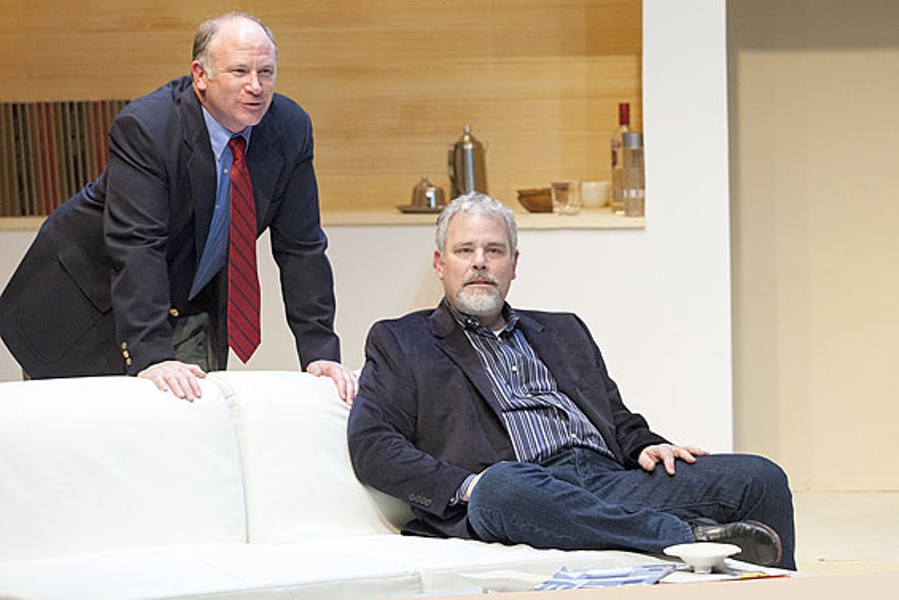 John Lamb John Pierson and William Roth in The Goat, or Who Is Sylvia? at St. Louis Actors' Studio.

With The Goat, or Who Is Sylvia? St. Louis Actors' Studio blows the barn doors off

Martin is a man at the top of his game. He has just been awarded architecture's grandest prize, he has won a plum assignment designing the city of the future, and he has a loving wife and a teenage son who's bright and maybe gay — and Martin's mostly all right with that.

He also has a mistress of an unusual sort, a beautiful and fawning creature named Sylvia who peers into his soul with kind eyes and suffuses his being with warmth and comfort. She's a goat. Keeping his relationship with Sylvia a secret is elevating Martin's stress to unsustainable levels, and it's causing him to forget little things here and there — namely, that thou shalt not lie down with goats, nor any other animal.

But why? That question is the poisoned needle in Edward Albee's uncanny fable, The Goat, or Who Is Sylvia? Why is whom we love the business of society? Barely a generation ago, miscegenation was a crime in this county. It's just love, and love is never a crime.

And as Martin (John Pierson) makes clear when he describes his initial meeting with Sylvia, he loves her in a spiritual, emotional and profound way. Pierson's eyes glow as he recalls the frisson of that first moment, and a calm wraps his body. He's the very image of new love, lost in a new world that is beyond explanation, understanding and logic.

It's a remarkable moment of calm for Martin, as it occurs while he's confessing his extramarital affair to his wife Stevie (Nancy Bell), who takes the news better than most women would. Sure, she lays waste to their Architectural Digest-worthy apartment ashtray-by-bric-a-brac as she processes the news, but she needs to know the entire truth of Martin's supposed love. How did this happen?

That question is director Wayne Salomon's through-line in this St. Louis Actors' Studio production, and he has cranked it so taut that it nearly hums. Stevie needs to know more than she fears knowing, and so Bell becomes the greatest prosecuting attorney of recent memory. Cajoling and hectoring her husband into staying on topic, Stevie teeters on the edge of hysteria but somehow retains control ("Women in woe often mix their metaphors," she tells Martin when he attempts to correct her word choice) without resorting to inchoate screaming. It turns out a thrown objet d'art is a fine substitute for screaming, but the possibility that she's going to lose her supernatural self-control crackles behind every exchange — and it's forever increasing the deeper we go.

When that high-tension line connecting Martin to Stevie finally snaps, Bell implodes with terrifying intensity. Even more terrifying is the realization that the story hasn't ended; Albee is determined to chase this question of love's propriety to its gruesome end. Salomon, Pierson and Bell are up to the task, somehow surpassing every terrible revelation and nightmarish twist we've already survived.

Love makes fools of us all, but when it's poisoned or betrayed, it can make us furies. Try to keep your eyes open in the final five minutes, so you can see love do all these things and more.