With The Crucible, Stray Dog Delivers a Masterpiece

Paranoia stalks the New England countryside, and the people live in fear. Several nights ago a group of girls were caught dancing in the moonlit woods (naked, some whisper), and now the devil is loose in Salem. If you don't believe that, you're either a fool or in league with the devil. And in Salem, devil worshipers are hanged.

Arthur Miller wrote The Crucible in response to the McCarthy hearings, but he was also writing about the animal instinct to survive and the terrible things it can make us do. Will you cut off your leg to escape a bear trap? Will you climb atop the pile of dead bodies to escape drowning? Will you, an otherwise empathetic and compassionate person, throw a loved one on the funeral pyre to escape the flames yourself?

That animal instinct will keep you alive, but there is inside us something more than animal, an ethic that allows us to throttle the will to live and instead die with nobility. Stray Dog Theatre's production of The Crucible captures everything brilliant in Miller's writing — the suspicion, the human weakness, the nightmarish reality of a society killing itself to remain pure, the nobility of those who defy the madness — and amplifies it all. Director Gary F. Bell masterminds a deep dive into madness, and never flinches nor allows you to look away. It is a masterpiece, both as a play and a production.

The beginning of the end is already in progress when the play opens. Reverend Parris (Ben Ritchie) has discovered his daughter and some friends dancing in the woods. Now several of the girls are in a coma-like state and can't be roused, a fact that smacks of witchery. Parris sends for Reverend Hale (Abraham Shaw), an expert on demonic forces, to get to the bottom of everything.

The law is clear in the matter. If you confess to dealing with the devil and repent, you're free to go. If you don't confess — perhaps you're innocent, or perhaps you simply wish to remain in league with Satan — you're hanged. The dancing friends confess and name names, gaining both a power and prestige from their new infamy. 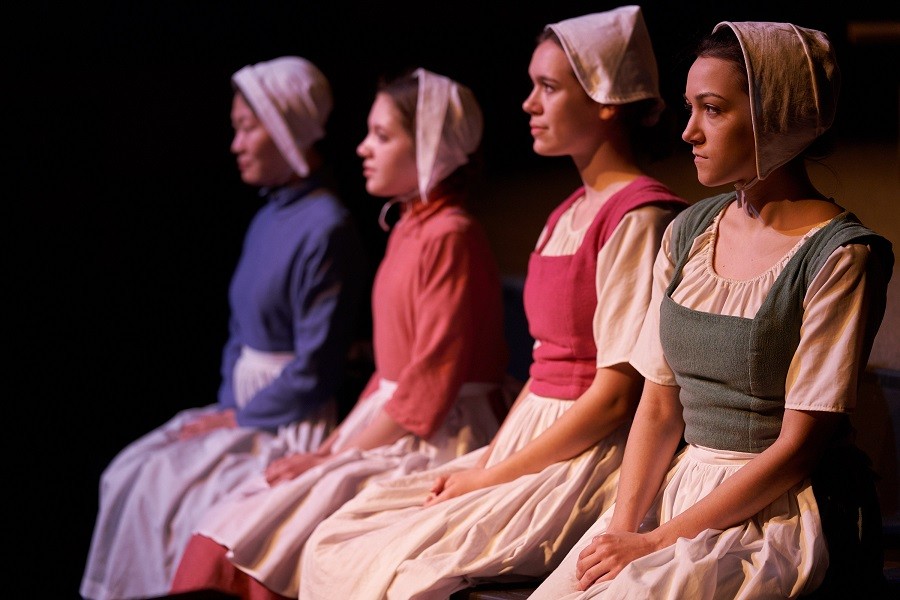 Miller requires four acts and three-plus hours to show just how successful Hale's investigation is, and Bell doesn't squander a moment of it. As The Crucible sinks its claws into your heart, you see how everyone in Salem is connected, and how all of these connections — both good and bad — underpin who gets named as the devil's conspirators. Old scores can be settled quickly with a confession and a few names.

The expansive cast is excellent, both with Miller's stylized language and in performances. There are standouts even in the smaller roles: Gerry Love's cantankerous Giles Corey, Laura Kyro's permanently bereaved Ann Putnam and Kelli Wright's Tituba, a slave from Barbados who is at the center of the conspiracy and just wants to go home. The growing doubts felt by Shaw's Reverend Hale about what's really happening in Salem weigh him down, and he enters rooms as if he's dragging the hanged behind him.

At the center of it all are John Proctor (Graham Emmons) and Abigail Williams (Alison Linderer), who dance a doomed waltz as former secret lovers entangled in the conspiracy. John thinks he can stop it, and Abigail thinks she's controlling it, but too late they discover they're both wrong.

The end is present in the very beginning. Scenic designer Josh Smith's set comprises a few screens in neutral colors, with a tangle of pointed wooden beams converging over center stage. As Deputy Governor Danforth (Joe Hanrahan) announces he'll "hang 10,000" to wipe out all conspirators, a disillusioned and heartsick John Hale looks to heaven. That's when you and he both recognize those beams are the hungry branches of a forest of gibbets, each one awaiting another rope and another citizen.