Instead of a stick-to-the-ribs, hearty comfort classic, chef Michael Gallina's version is downright delicate. Parisian gnocchi, so delicate it's like eating a flour-thickened cloud, is so light it floats to the top of the diaphanous chicken broth. The dumplings compete for space with a generous portion of carrots, celery root and turnips, cooked but still firm, and hunks of tender chicken. The dish also features flourishes you likely wouldn't find in a grandmother's country kitchen: Verdant fresh herbs are strategically placed atop the concoction. Their vibrant green, combined with the colorful carrots, make the dish look as much like a piece of art as a source of nourishment.

These chicken and dumplings are wonderful, delicate yet powerfully flavorful and executed flawlessly. They are also, most likely, completely different from other versions you've had. 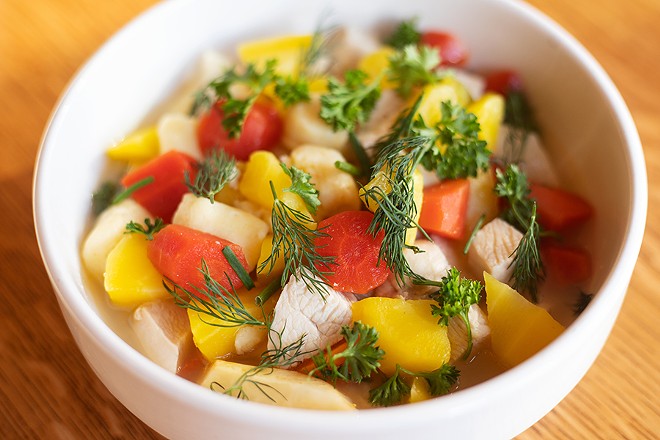 If you first experienced the restaurant at 7213 Delmar Boulevard as Winslow's Table, you might not realize that this sentiment can be applied to much bigger things than chicken and dumplings. Prior to Michael and Tara Gallina taking over the place last summer, the space operated as Winslow's Home, a beloved neighborhood institution that boasted a farm-to-table sentiment, a cute general store and a fiercely loyal following, with some guests patronizing the place almost daily over the course of its eleven-year run.

It's no surprise, then, that when the Gallinas announced their plans to buy it from longtime owner Ann Sheehan Lipton, there was a great deal of apprehension — and in some cases, downright suspicion — on the part of that contingent of regulars. Although many recognized that change was inevitable, perhaps even needed, any change would be difficult no matter who was bringing it about. 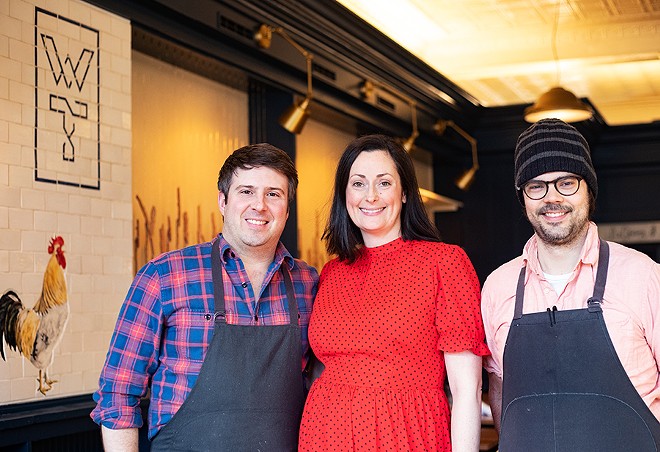 The Gallinas understood this. In fact, the restaurant's relationship to the neighborhood was one of the things that appealed to them. As Winslow's Home patrons themselves, they were always charmed by the place and loved its affiliation with Lipton's other venture, Winslow's Farm. Over the course of working with the farm at their acclaimed restaurant Vicia, the Gallinas got to know Lipton well enough that when there were whispers about her wanting to sell the place, they figured they could approach her about it.

It turns out, she approached them first. During a casual lunch meeting, the conversation quickly switched from "would you be interested?" to sketching out the details about how Lipton would transition the business from herself to the Gallinas. From Lipton's perspective, the arrangement would allow her to place her beloved business in the hands of people she trusted to be good stewards. For the Gallinas, it was the chance to present their food and service sensibilities in a more approachable setting, something they'd been thinking about doing for some time. It was a win for both.

Considering Winslow's Home's reputation as a neighborhood spot, the Gallinas knew that they had to tread very lightly when it came to change. From the outset, they made it clear that they intended to honor the restaurant's legacy while staying true to their own point of view. Fortunately, these two elements were not in conflict, though Winslow's Table is indeed a different restaurant than its predecessor.

The aesthetic changes are immediately evident. When the Gallinas took over the restaurant, the interior was painted white (contrary to popular belief, the woodwork had already been painted under the previous ownership) and had a sizable retail space and walk-up pastry counter and coffee bar. The latter two elements remain unchanged, but that's where the similarities end.

Gone are the kitchen gadget- and book-lined shelves, filled now with a three-dimensional, ceramic installation of a rooster, hen and two chicks surrounded by stalks of wheat. To the casual observer, it might seem like an obvious reference to the restaurant's farm-to-table commitment. For the Gallinas, however, it's much more personal. When the pair first returned to Michael's hometown of St. Louis four and a half years ago, they established a pop-up series called Rooster and the Hen. The two little chicks represent their daughter and the little one they have on the way.

The remainder of the shelves remain bare, save for a few spare beverage glasses. It's a stark contrast to the former occupants' knick-knacky vibe. To warm up the space, the Gallinas chose a deep grey blue — almost navy — which adds some depth. They also added a small waiting area near the front door, which is helpful for one of the biggest changes: Winslow's Table is now a full-service restaurant for breakfast, lunch and dinner, as opposed to the counter-service model the previous iteration employed during daytime hours. Reservations are available for dinner; for breakfast and lunch, the restaurant manages its sometimes lengthy waits through Yelp's waitlist. 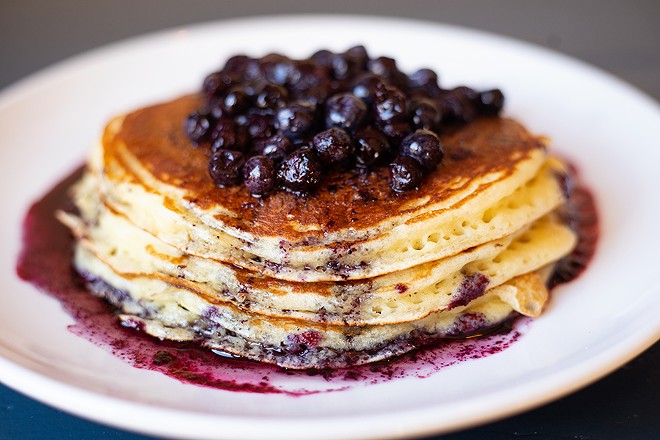 Like the aesthetics, Winslow's Table's menu, at least during the daytime, is a blend of old favorites with new dishes that have the Gallinas' unique thumbprint on them. The Winslow's pancakes, for instance, remain unchanged — why would anyone mess with these malty, fluffy wonders, covered in tart preserved blueberries and served with a side of simple whipped butter? They are the Platonic form of the breakfast classic.

For their breakfast sandwich, the Gallinas offer a knife-and-fork biscuit version, stacked with shockingly tender shaved ham, a fried egg and molten gruyere cheese sauce. The richness of these components is punctuated by rustic grain mustard, a welcome, balancing touch. It's hard to decide which is the plate's showstopper, though: the sandwich itself or the outstanding seasoned breakfast potatoes which magically exist in a suspended state between crispy fried and soft. 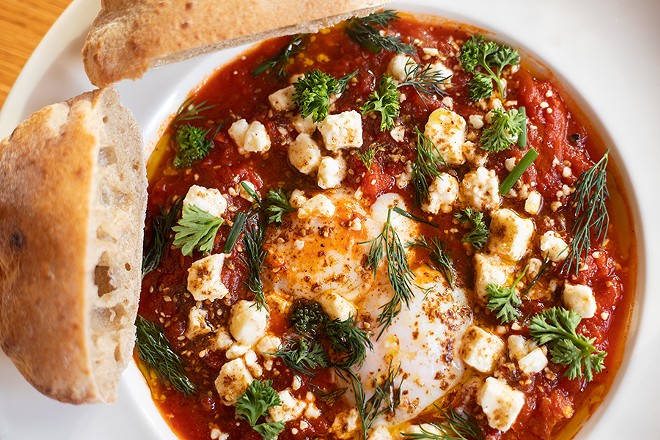 Shakshuka, the North African egg-topped tomato stew, is a welcome addition to the menu. Tomatoes and peppers are simmered with herbs and harissa, a mouthwatering concoction made decadent with poached eggs and a sprinkle of feta cheese. Sourdough pita is served for scooping up every last morsel of this vibrant dish.

The grain salad is on its way to becoming a new classic, and it's easy to see why. Wheatberries and farro provide a base for sweet potatoes, butternut squash, kale and shiitakes. Luscious ricotta and green goddess dressing finish a dish that feels both healthful and indulgent.

Because Winslow's Home had stopped its dinner service by the time the Gallinas took over, the couple had a blank slate to put their own stamp on the menu. You see elements of Vicia but done in the fashion of a Wednesday night restaurant rather than a special-occasion one. Roasted carrots glisten with a tangy hot honey glaze, their snappy texture underscored with crunch from crispy pepitas. A dollop of ricotta sits atop the dish; when mixed in, it transforms the cold dish into something evocative of an elegant potato salad.

Luscious pork rillette is like a deeply savory porcine butter, its richness contrasted with the accompanying raspberry jam. Spread atop a slice of toasted porridge bread, it's a magnificent sweet and savory treat, though the bread service at Winslow's Table is so wonderful it shines even with humbler trimmings. A simple order of sourdough, served with verdant herb pesto, butter and garlic whipped to the texture of silk, is equally satisfying.

Winslow's Table offers a selection of skewers served alongside a choice of various grains. Chicken thighs are simple but well executed; the crispy skin, its most prominent seasoning the delicious bitter char from the grill, encases the plump, juicy meat. We paired this with a side of gruyere-Brussels-sprouts polenta that was topped with a poached egg. When mixed together, the egg's yolk and soft white combined with the rich polenta to make a positively decadent concoction.

The scallops are another standout. Like the chicken thighs, the shellfish are minimally seasoned to allow for their delicate, sweet flavor to shine through. Here, the grill flavor worked particularly well; the effect evoked a beachfront barbecue. Paired with the grain salad that was so dazzling on the lunch menu, the dish was light but wholly satisfying. 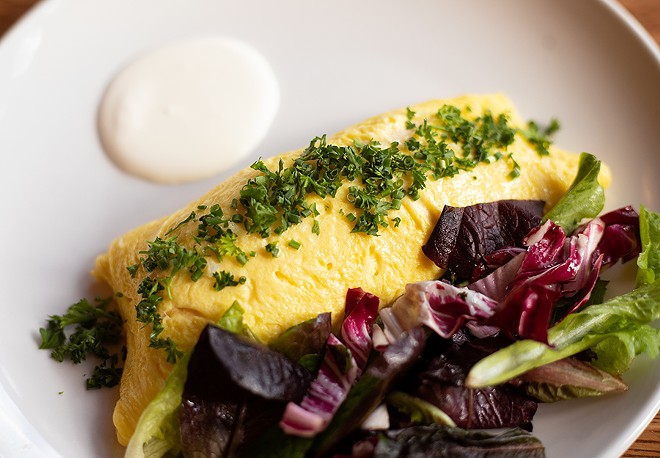 The evening's standout, however, is the crab omelet. A shocking amount of sweet Maine peekytoe crab meat is folded into a flawlessly cooked French-style omelet that is soft, buttery and slightly undone in the center. This allows the eggs and crabmeat to soak into one another, forming a magnificent filling that is then dipped into the accompanying small pool of crème fraiche. Some simple fine herbs punctuate the richness for a flourish that makes you feel as if you are in a Parisian bistro. 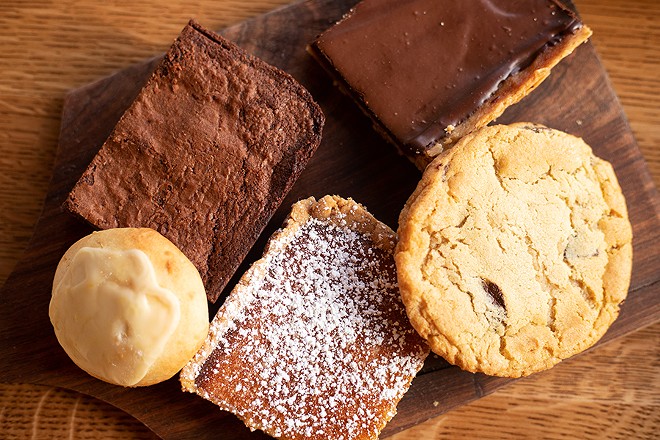 If you only come into Winslow's Table for the pastries, you might not realize that anything has changed. The Gallinas were able to retain several employees with knowledge of the predecessor's bakery side of the operation, so loyalists can rest assured that the beloved "Winslow's Bar" remains a glorious layer of shortbread, caramel and chocolate evocative of a brownie-sized Twix bar. The blondie is still soft on the inside, crispy around the edge and liberally studded with macadamias and white chocolate. And that chocolate-chip cookie? It's as brown sugary, chocolate filled and sea salt gilded as ever. 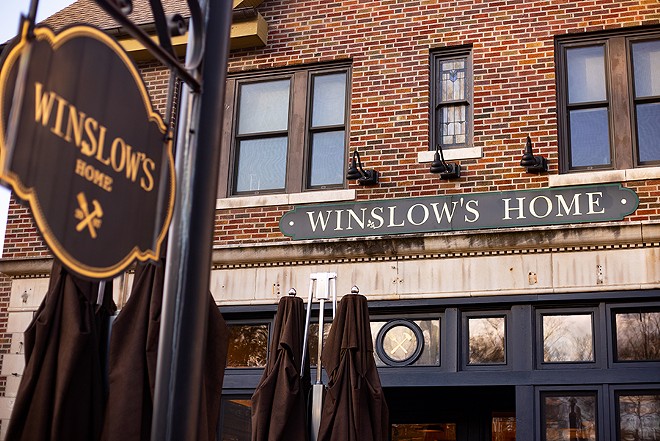 Baked goods aside, there's no question that Winslow's Table is a vastly different establishment than its predecessor. The biggest change, one that is a culmination of many little details, is that it's gone from a neighborhood gathering place to a neighborhood restaurant. This isn't an intentional vibe put out by the Gallinas or anyone on staff. If anything, they are gracious hosts, as are their daytime servers — Ebony, in particular, is among the warmest in the business. The fact is, seating real estate seems more precious at a sit-down establishment. It no longer seems OK to grab a cup of coffee and a scone and take up a table for three hours. Add to this the missing retail component, which gave the old place a sweet, quirky vibe like you were hanging out in someone's smartly decorated house, and it just feels like a restaurant.

And that's not a bad thing. Change is inevitable. In this case, it was imminent whether the Gallinas took it over or not. I suspect that, once the shock of change wears off, the old guard will see Winslow's Table for what it is: a sweet neighborhood restaurant with subtle echoes of the past, that is great in its own right.