Whatever Happened to Predictability? It's in The Kings of Summer, where life is a sitcom 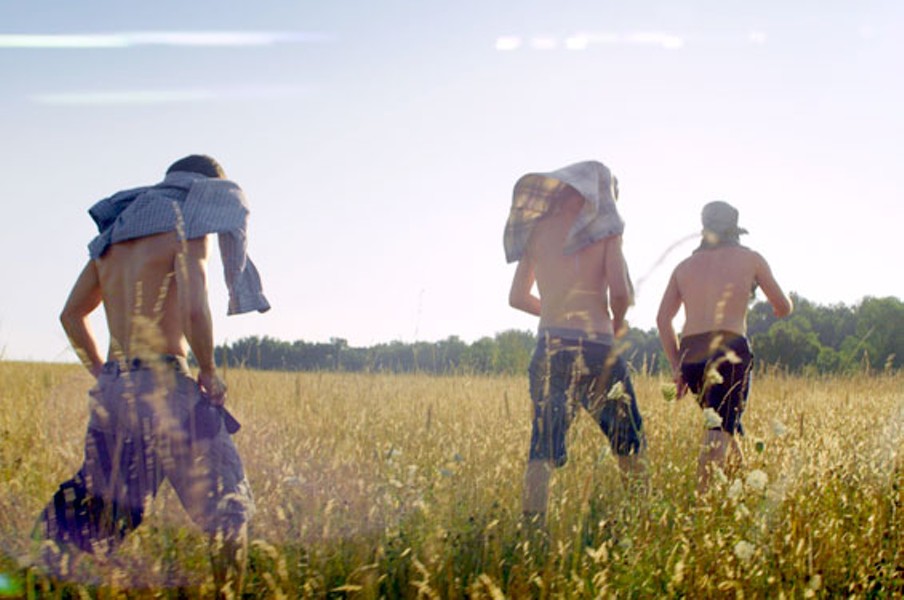 Whatever Happened to Predictability? It's in The Kings of Summer, where life is a sitcom

It's to the great detriment of The Kings of Summer that it follows the identically premised Mud by just weeks. Both films tell bittersweet coming-of-age stories about teenage friends who learn how to become men in a soon-to-be-corrupted Eden, and both are questionably embellished by a predictable teen romance, an undertone of misogyny, and a plot device best described as Chekhov's snake. (Once introduced, a serpent must strike.) But whereas Mud — through its anchoring in a rural-gritty, river-tied geography and an impressive star turn by Matthew McConaughey — feels thoroughly cinematic, The Kings of Summer plays like an extended sitcom episode, and not a very special one at that.

Sitcoms, especially since Seinfeld, have a way of getting audiences to root for jerks. The Kings of Summer attempts to pull off the same narrative trick by getting us to mistake its fifteen-year-old protagonist, Joe (Nick Robinson), for a scamp instead of a sullen little shit, even when he calls his widower dad's boring-but-nice girlfriend a "spider woman you found in the gutter." Joe thinks his gruff, sarcastic father, Frank (Nick Offerman, playing a less noble variation of his Parks and Recreation character Ron Swanson), is totally ruining his life, even though we see the kid being way more of an ass than the man. So Joe builds and moves into a fantasy cabin — complete with windows, a loft, and an air-hockey table — with his more athletic best friend, Patrick (Gabriel Basso), and a nonsense-spouting ethnic cartoon named Biaggio (Moises Arias) — one of the two dark-skinned, asexual characters the film prods us to laugh at. To clinch all the Urkel-era clichés (gotta catch 'em all!), Joe and Patrick run away by telling their parents they're sleeping over at each other's house.

For a while, the three teenagers live in a Boys' Life paradise, jumping into lakes, dueling with swords and sneaking off to Boston Market to retrieve dinner. But their idyll evaporates with the arrival of a popular blond girl (Erin Moriarty) — do teenage boys in movies ever fall for anyone else? — who unwittingly pits Joe and Patrick against each other. Joe's conflicts with his friend and his father lead to a tense yet funny, mettle-testing climax, but the ending is more cornball than Tony Danza.

Like so many comedian-driven comedies today, The Kings of Summer stitches together an occasionally off-kilter sensibility atop an Americatown-level of genericness (as in every Paul Rudd movie in the last five years). First-time director Jordan Vogt-Roberts tries to hide the seams, mostly by making the boys as witty as the stand-ups and sitcom actors who make up the adult cast. But Vogt-Roberts is too charmed by Joe's rascality to change him very much, thus flattening his emotional arc, already barely buttressed by cardboard emotions. This makes the grown-up world — populated by the shticky but pleasingly tart likes of Offerman, Megan Mullally, Alison Brie, Mary Lynn Rajskub and Kumail Nanjiani — a lot more interesting than its pimple-faced counterpart. As nostalgic projections of boyish freedom by a couple of thirtysomething dudes, the so-called kings are good-enough jesters, but I couldn't help wishing they would shut up more and let the grown-ups talk.

The Kings of Summer is not showing in any theaters in the area.