As the line for entry into Westport Social on a recent Saturday night snaked down the sidewalk and along the length of the building, I was lucky enough to be on the inside, tucked into a small bar table right up against the front windows. My fortunes would become even more apparent to the poor souls on the other side of the glass when a heaping platter of "Burnt-End Nachos" arrived — a feat of architectural engineering that appeared to defy gravity in its ability to stay upright.

A Jenga-like lattice of wonton chips at least eight inches tall served as the base of the structure; hunks of savory beef brisket, Kalamata olive slices, banana peppers and pico de gallo adorned it. The sculpture was interspersed with avocado crema and cheese sauce that was more like a velvety fondue than stadium nacho goo — a dish that induced a reverie interrupted only by the tapping on the glass from eager spectators pointing at my plate, smiling and giving a thumbs up. I couldn't tell if they were sharing in my amazement or trying to beat down the window to snag some nachos. Either made perfect sense.

That Westport Social is attracting throngs of people willing to stand in bone-chilling weather to get inside is quite a development to say the least. It's no secret that Westport Plaza, the sprawling dining and entertainment destination in which it resides, has seen its glory fade, as once-signature properties saw their patrons flee faster than you could down a Long Island iced tea at the old America's Pub. A year ago, the only real luster on the place was the golden-mirrored high-rise that bore its name — and even its outdoor-facing "scenic elevator" is broken.

Yet hospitality management company LHM is banking on the area's ascendance. The company, which counts the Cheshire, the Hilton Downtown and Union Station among its properties, acquired the plaza in 2015, a calculated gamble based on the uptick in development in the area, new restaurants, and a hotel occupancy rate in Maryland Heights that is second only to downtown. They saw a need for a nightlife option that would not only cater to the numerous companies in and around the plaza but would also provide the area with a type of venue that has been growing in popularity around the country, namely a grown-up entertainment complex that gives drinkers something to do, without the incessant dinging and obnoxious flashing lights of a Dave & Buster's. 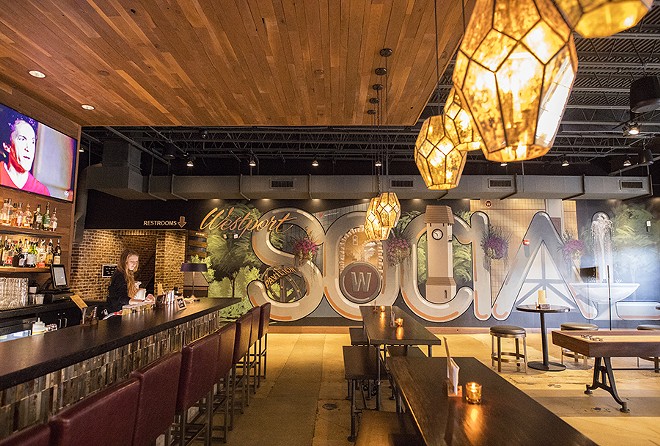 LHM is indeed onto something, and it doesn't take a packed house to see that. The massive, 12,500-square-foot restaurant is sleek and stylish — a surprise to someone used to the old Westport but not surprising at all considering LHM is behind places like Basso and Three Sixty. You enter into a smaller bar area featuring foosball tables, a bar and the kitchen, all decorated in rustic, earthy tones. The back room is where most of the action is, as evidenced by the gigantic televisions that cover the walls. On two sides there are bocce courts; to the front is a music stage, and to the back and the side are shuffleboard courts and two full-size basketball pop-a-shot setups. A large, rectangular bar sits in the middle of the room, surrounded by semi-circular booths and seating areas heavy on the velvet and leather.

LHM took pains to match the modern vibe with food and drinks that nod at classic bar food but transcend the baseness often associated with the genre. If the nachos show this kitchen can elevate classic appetizers, the wings prove they can put it on a jewel-crusted pedestal. The plump drummies and wings are smoked, infusing the juicy meat with flavor without overtaking it. A slightly sweet dry-rub coats the exterior, fusing with the fat and smoke to render additional condiments unnecessary. Not that you'd be out of line using the accompanying red-pepper dipping sauce, a tart, yet mild, alternative to Buffalo.

Salt-crusted soft-pretzel sticks with addictive "Cheez Whiz sauce" are straightforward but again demonstrate how a little bit of effort, like infusing the cheese sauce with bright IPA and folding in mouth-puckering whole-grain mustard, goes a long way in turning a boring dip into something wonderful. The same goes for shrimp skewers, a thoughtful stand-in for shrimp cocktail. The grilled shellfish rest atop bright jalapeño-pineapple relish and are drizzled with chimichurri for a refreshing effect. 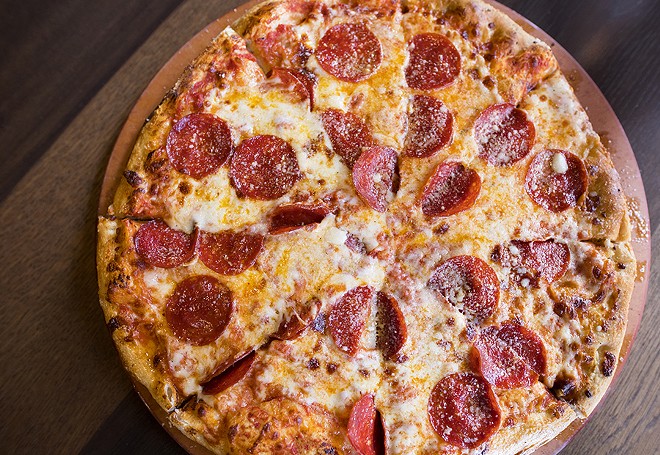 Empanadas are mushroom-stuffed pillows, their flaky exterior underscoring the fact that these are indeed made in-house. Chiles give the filling a touch of heat, and cilantro crema adds richness for a dish that would not be out of place at a trendy Mexican restaurant. Likewise, the pizzas are respectable enough that you wouldn't bat an eye if a dedicated pizzeria were serving them. Though not classically Neapolitan, their simple, crushed tomato sauce gives them that essence. The crust is crispy, the interior is gooey and, when paired with large, fennel-flecked crumbles of local sausage, it makes for the quintessential sausage pie. Even the plain cheese version hits the spot.

I have a hard-and-fast rule about not ordering fish tacos at a place that looks like it shouldn't serve fish tacos. Westport Social fits that profile and blows my theory out of the water. A flaky piece of battered cod is nestled into a corn tortilla with crisp cabbage slaw and lemon pepper crema. If I were served this exact dish on the beach in Baja, I wouldn't blink. 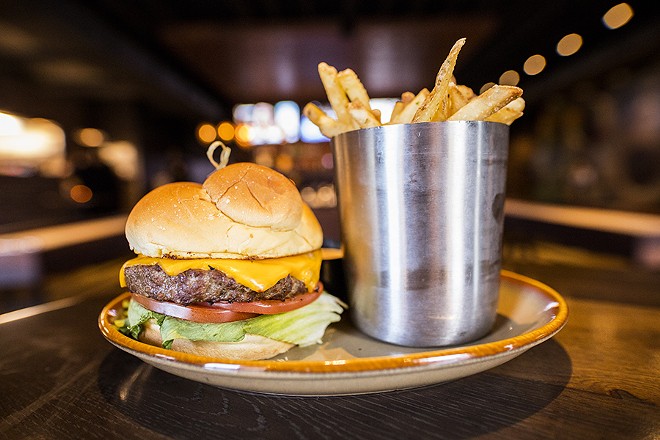 I wanted the house burger to be thicker and juicier than it was based on its blend of sirloin, brisket and short rib. As it is, it's a solid cheeseburger smothered in American cheese and grilled white onions. Considering how much Westport Social improved upon other bar staples, I expected more. A pulled-pork sandwich at lunchtime gave that. The succulent meat was reminiscent of what you'd get hand-plucked at a pig roast. The kitchen was restrained in its accoutrements, allowing the meat to shine through: just a dash of tangy Alabama white barbecue sauce, some slaw and a brioche roll that glistened with pork fat and butter.

The fact that the full-sized version of this sandwich is only available at lunchtime (sliders are served during dinner hours) should pack the house, but on a daytime visit, we had the entire place pretty much to ourselves. It was a welcome respite from the elbow-to-elbow crowds I witnessed on the weekend, but the pleasure of eating there that day underscores the only real flaw to the place: It is so busy that the crowds often overwhelm the game facilities. 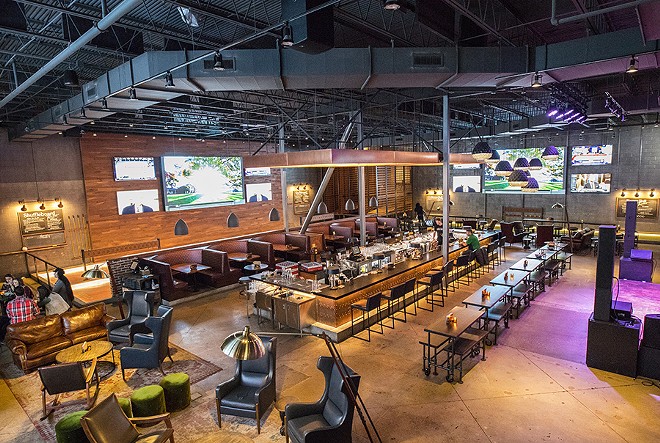 Clearly the idea behind Westport Social is to offer entertainment as an amenity — that the games are completely free only adds to the desire to play them. However, they are perpetually packed. A chalkboard sign-up sheet next to each keeps it dignified, but it's several people deep throughout the night and requires serious strategizing to partake. And because the venue caters to large corporate gatherings, the facilities, including the two on-site, fee-based karaoke lounges, are sometimes closed to the public. There's no real way around this without turning the place into a loud, overwhelming game hall — something that would go completely against the more upscale vibe they are trying to create. It's just something to consider if you plan on spending a Friday evening playing games. You'll have to strategize and be prepared to wait.

That wait is much less annoying with one of Westport Social's excellent drinks. LHM brought in Kyle Mathis, formerly of the esteemed cocktail spots Taste and Sardella, and his list is thoughtful while still being approachable. Classics like a collins mule and an old fashioned are balanced — a far cry from the sugar-bomb Purple Hooter shots that used to flow from the space's former tenant, Margarita Mama's.

Mathis' drinks, together with the near-flawlessly executed food, exemplify the sort of elevated concept Westport Social wants to be. The complex shows that, yet again, LHM has the magic touch and thinks through every last detail — except for those tables by the windows. Giving hungry patrons such a tease while they're waiting to get inside could well result in some broken glass.