Webster Wok Is the Real Deal. (Just Ask for the Secret Menu)

PHOTO BY MABEL SUEN "Yushiang Eggplant" is one of the highlights of Webster Wok's secret menu.

Three months ago, a new restaurant quietly opened on the corner of Big Bend and Old Orchard in the heart of Webster Groves. It's called Webster Wok.

For anyone who has driven past the busy intersection, this may seem like a bizarre, if not utterly incorrect, observation. After all, a restaurant named Webster Wok has been passing off its not-so-particular brand of sauce-coated chicken nuggets as Chinese food in this exact spot for more than 30 years. Granted, it closed for about a year to undergo a facelift, but it reopened a few months ago with a menu that looks basically the same. What's changed?

As it turns out, quite a lot. You'd never know it from a casual glance — or even from the default menu your server hands you — but about three months ago, Webster Wok stealthily transformed into a secret bastion of authentic Chinese food, courtesy of its new manager, Nora Li. 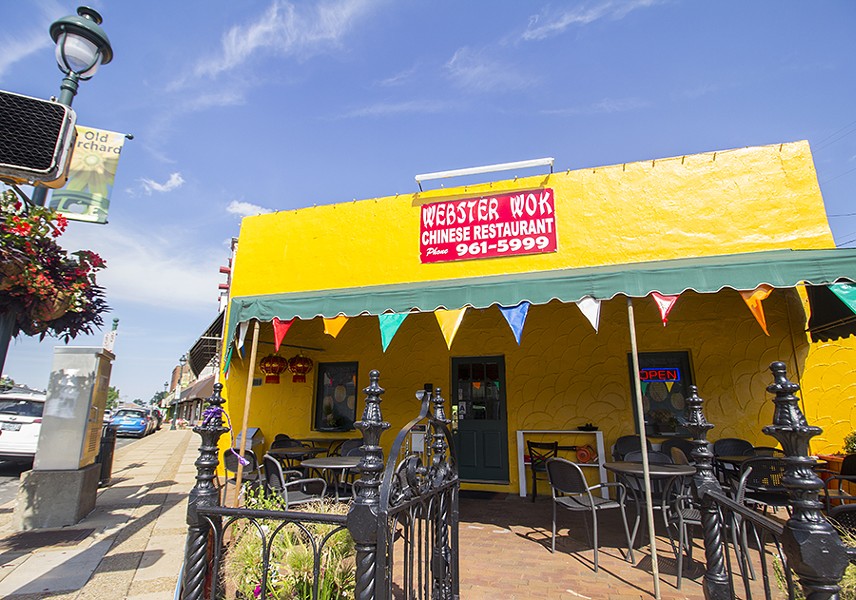 A software engineer by trade, Li watched her brother and sister toil for ten years in restaurants around town, yet they never seemed to get ahead. If they were going to work so hard for someone else, she thought, why not open their own place and apply their experience to create a better life for themselves?

Though she had zero restaurant experience herself, Li searched around town for a turnkey restaurant the family could take over. That's when she came across an ad for Webster Wok. She worked out an agreement with the restaurant's owners to take the place over. It was a lease, not a purchase, but she and her family were given full creative control.

Li took that notion seriously. Though she did not want to alienate the longtime regulars who frequented the place for the Americanized fare, Li wanted to offer diners a more authentic taste of her homeland. To do this, she hired a Chicago-based chef who had received acclaim in his native Shanghai to head the kitchen. As he developed the menu, Li and her siblings got to work deep-cleaning and renovating the space, a job that took several months. Finally, they opened the doors of the new and improved Webster Wok at the end of May.

The exterior of Webster Wok looks identical to its past incarnation, so you'd be forgiven if the change went unnoticed. You'd even be forgiven for failing to recognize anything different than a fresh coat of paint if you perused the menu. This is because Li and company assume that diners come into Webster Wok looking for the Americanized dishes and, by default, hand over a menu that lists them. However, tucked away behind the counter is a secret menu that boasts traditional Chinese specialties — offerings that have about as much in common with the American menu as they do with what's fried up at the McDonald's across the parking lot. There are no General Tso's McNuggets here: This food is transcendent.

For appetizers, an almost translucent, scallion-flecked pancake is neutral on the initial bite, but it gradually reveals layers of subtle flavor — the pungent herbs, the delicately nutty dough, a hint of savory oil from the frying pan. Its heartier cousin, the chives bao, is more upfront in its flavor, hitting you with the salty brine of minced shrimp mixed with eggs and chives. The concoction is stuffed into a crepe-like batter and pan-fried, a cross between a quesadilla and an omelet. Li is particularly proud of the restaurant's version of this dish, and it's easy to see why.

A sizzling platter of "Country Style Pork" presents as a spice bomb — which it indeed proves to be. Rich pork belly and shockingly tender tendon compete for real estate on the plate with fiery green chiles and green onion. The spice from the peppers infuses the rendered fat, forming a chile oil glaze that gives each bite a hiccup-inducing kick. However, the pork's flavor shines through, making it difficult to stop eating even as the sweat beads on your brow.

"Yushiang Eggplant" is less spicy than the pork, though it still packs a red chile-spiked punch. Large hunks of the jewel-toned vegetable are slicked with sesame oil and coated in red peppers, but the heat is offset by vinegar and sugar. The eggplant is cooked perfectly; the texture is firm enough to retain its form, but soft enough to dissolve like tempered butter. It's a master class in how to prepare this most noble of vegetables. 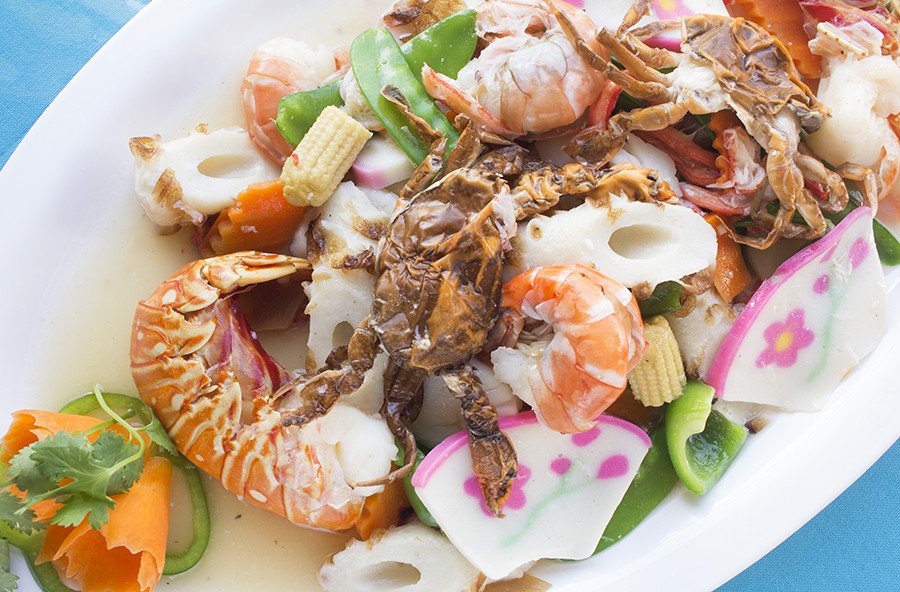 Under the "seafood" section, an entry simply lists "shrimp, scallop, lobster and squid." What arrived was a bounty so impressive it may as well have been commissioned by Neptune himself. Two lobster tails, tender squid, pearlescent scallops, massive shrimp, hunks of crabmeat and bamboo stalks cut into geometric shapes bob in a thickened broth that tastes like lobster bisque. This impressive platter is positively celebratory.

I was reveling in the clandestine nature of my initial Webster Wok visit, but my pride was shaken when I walked into the restaurant for round two and discovered that I'd only learned part of the story. My friend, who hails from China, had gotten there first and was perusing something even more secret: a third menu, written entirely in Mandarin, that is given out to the restaurant's Chinese guests. Initially, I thought it was simply a translation of the menu I'd seen the other day, but it turns out to be an entirely different bill of fare with even more traditional Chinese food.

Had I not been with her, I might never have experienced the fried lamb with cumin, a sauté of meat that is so tender it literally melts in the mouth. Cumin, green peppers and chiles infuse the meat with complex heat.

Double-cooked pork belly is as succulent as the lamb, a texture that results from boiling the meat before frying so that it softens and the excess fat cooks off. Somehow, this concentrates the pork flavor, while the remaining fat mingles with the green peppers and garlic leaves, forming a spicy glaze.

Webster Wok also serves a surprisingly authentic version of Geleshan chicken — or, at least, so pronounced the stranger at the table next to us who has had the real deal. Named after a city in China, the dish consists of bone-in hunks of meat that are floured, fried and coated in Szechuan peppercorn chile oil that imparts a menthol flavor. It has a delicious flavor profile that's similar to the restaurant's anise-scented beef brisket and tomato soup. Like pho on steroids, this rich broth is a warm bowl of comfort. 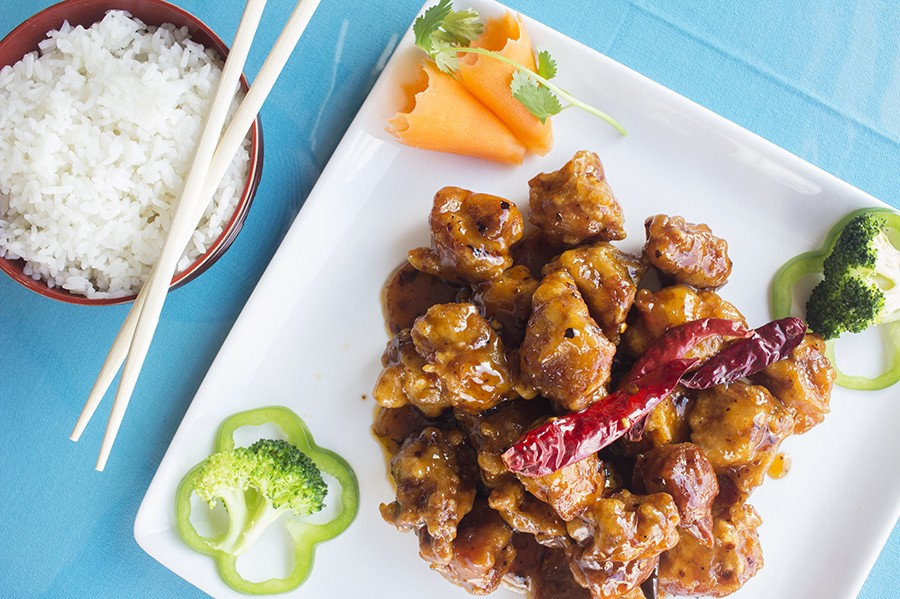 Sweet and sour squirrel fish is as much a feast for the eyes as for the palate. The mild white fish is splayed and cut up in a way that can only be described as looking exactly like a bloomin' onion. The entire fish is battered and deep-fried, then covered in real sweet and sour sauce that looks cloying but is surprisingly balanced. This, according to my friend, is the dish you order when you are trying to impress people.

I was indeed impressed, though when I think back to our dinner, I keep coming back to a simple cabbage sauté. White cabbage, hand-shredded into bite-sized pieces that are like silken rose petals, glistens with sesame oil and red chiles. The earthy funk of the cabbage marries the nutty oil, creating a deep, savory flavor punctuated with pungent red pepper spice that coats the mouth. It's been two weeks, and I'm haunted by cabbage, something I didn't know was possible.

As I reveled in this cabbage-induced nirvana, I noticed a man walk in for a to-go order. "General Tso's chicken," he said, and then left the restaurant with his order, a man standing on a whale fishing for minnows. I imagine he's not alone — after all, the name Webster Wok has been associated with crab Rangoon and three-dollar lunch specials for the better part of three decades. And it still is, only now, that's just one part of the story. The rest is hiding in plain sight.