View of a Hanging

How do you handle seventeenth-century paintings? Very carefully. 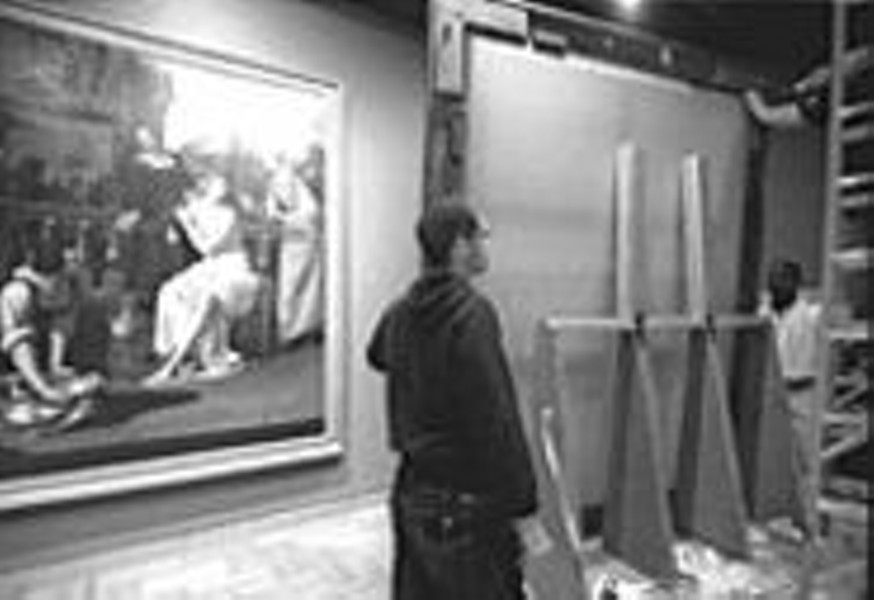 Jennifer Silverberg "We can all breathe again, now," says curator Judith Mann, as "David and Bathsheba" is secured into place.
Three strong men push the large, red crate across the floor of the St. Louis Art Museum special exhibitions gallery. The crate is marked with its place of origin, the Detroit Institute of Art; and its dimensions: H 62 W 67 D 15 1/2 Weight 324 pounds.

It's quite a load. The men have placed carpet strips under the crate to ease its passage across the floor. They gently lower the huge crate in a gallery where they've already hung a number of paintings: a portrait of Cleopatra, nude, recumbent, asp in hand; Danaé, the same model, same pose, Zeus in the form of a shower of gold coins falling on her.

Jeanette Fausz is alert to every move the crew makes. SLAM's registrar stands at a small table and records their efforts. Brian Benben, a sturdily built white man with baseball cap turned backwards on his head, calls out "Bolts." Fausz, in military fashion, responds, "Bolts," and writes it down. Ron Weaver, the member of the crew who looks the most arsty with his small-frame glasses and long sideburns, can now remove the bolts from the crate's hinges with his power drill. Daryl McAdoo, a handsome African-American man with a full moustache and shapely arms, is the head of the installation crew. This day, with dozens of crates yet to open he's no-nonsense, acutely observant.

How do you handle seventeenth-century paintings? Very carefully, the SLAM staff answers on cue during the installation of Orazio and Artemisia Gentileschi: Father and Daughter Painters in Baroque Italy.

The atmosphere combines nervous tension and eager anticipation. "It's like Christmas," says Fausz, who watches as incredible gifts emerge out of large packages one by one over the two-week installation period.

Weaver and McAdoo lift the lid from the crate and set it aside. Benben calls out, "Face up. Plastic." Fausz writes down that the painting has been wrapped in plastic and is lying face up, recording the condition of the painting as they find it at every stage of the process. Weaver and McAdoo, wearing white gloves, take hold of the baroque gold frame and raise the painting up from the crate, where it has lain secure within thick layers of Styrofoam.

Once the painting is upright, the three peel the red tape holding the plastic. The nearly 400-year-old composition of oil on canvas is unsheathed from material that didn't exist when Artemisia lived.

The painting is dark. In the image, a candle serves as the only light source on Judith, who is dressed in a rich gold fabric. One hand is raised, as if in alarm, the other grips firmly the handle of a sword. Beside Judith, her maid kneels, face upraised to the light.

Benben looks in rapt appreciation of "Judith and Her Maidservant." "She's going to go cut off his head," he says, knowing the story of the heroic Judith, who decapitates the tyrant Holofernes in his sleep.

Then Benben looks to the bottom of the painting, hard to see in the unfocused light of the gallery, to what the maid is holding -- the bloody head wrapped in cloth. The deed's been done.

There's not much time for art appreciation with more crates waiting and more on the way. "Judith and Her Maidservant" is lifted onto a special carpeted dolly, constructed as an A-frame on which to rest the back of the painting, and rolled to another gallery where conservator Paul Haner is already at work.

Haner examines "Susannah and the Elders," a scene of a hapless young woman being ogled by two men who will rape her, an Old Testament story that Artemisia -- herself a rape victim -- depicted more than once in her career. It doesn't take much psychological insight to understand the significance, and the particular horror-show approach, of Artemisia's other prominent subject, Holofernes' beheading.

Haner's tools include a lamp that illuminates the surface of the canvas with separate fluorescent bulbs, providing different colors and temperatures that approximate daylight. The light is for revealing the textures of the painting's surface, which Haner examines wearing a hatband with magnifying lenses attached to it.

Haner, with a gray mustache and gray hair trimmed short, casually dressed in short-sleeved shirt and brown slacks, looks through a notebook that contains a list of conditions recorded by other conservators as these paintings have made their way across the world. St. Louis is the last stop for the Gentileschis; they have traveled from their various places of origin -- Naples, Fabriano, Detroit, a private home off the coast of Scotland -- to Rome, for the first stop of the tour at the Museo del Palazzo di Venezia, to the Met in New York, to SLAM. "By the time it's at the last venue," says Haner, "everything has been noticed."

So far, the worst damage he's seen has been a few bumps on frames. With a brush of soft blond bristles, he dusts the frames and gently swipes across the paint surface.

What appears to be a thin scrape shows up in a dark section of the painting, but Haner determines it to be in the varnish applied to the canvas before it left home. Paintings change significantly over 400 years. If they've been in churches, chances are they've been corrupted by incense and candle smoke. They've been cleaned in a number of different ways. They've been repainted. Varnish is used to make colors stand out, which a museum will do to highlight a prize possession on tour.

Judith Mann, co-curator to the exhibition, arrives with a brilliant shawl draped over one shoulder. She points out that over the years "Susannah and the Elders" has been cleaned to the point that Artemisia's underpainting has been revealed. In the blue background of sky the tracings of where the elders formerly stood -- before she moved them to the corner for better balance -- is visible.

"Saliva," Mann explains, "is the standard substance for cleaning. It has the least-degenerative qualities." The old masters have literally been spit-polished.

A week later, Mann, persevering through a flu bug, directs the hanging of Artemisia's "David and Bathsheba." She jokes that her husband can't believe that men are paid to listen to her tell them "Two inches to the right."

But McAdoo, Benben and Weaver show no consternation as they move "David and Bathsheba" and "Lot and His Daughters" closer together, then farther apart. The paintings -- taller than the men who are moving them -- rest on the floor and lean against the wall before hanging.

When Mann finds the point where the painting looks best to her eye, to nearby paintings, and in relation to the wall, Benben pulls out his tape measure and "David and Bathsheba" is set aside on the dolly. This painting has arrived with hardware -- J-hooks have already been attached to the back. Mann recalls an exhibition a few years ago -- paintings from St. Petersburg's Hermitage that arrived without any hardware, which might have been a Russian plot to appropriate good Western D-rings.

After measuring, Benben stands on a tall stepladder and drills two holes, then screws in the eyes into which J-hooks will slide. The ladder is moved aside and McAdoo and Weaver lift "David and Bathsheba," the canvas gently billowing like a curtain. Benben directs them from the side as they set the painting softly into place.

"We can all breathe again, now," says Mann, and the tension is released from the room. Benben places his level at the bottom frame's ledge and at the sides. McAdoo eyes the painting from the far wall of the gallery. All is level, safe and secure.

They move on to "Lot and His Daughters."