The phở tái bò viên at Joyful House is a revelation in how powerful a simple broth can be. Clean and bright but still intensely flavorful, this glorious nectar tastes as if the very essence of beef has been distilled into a delicate liquid. More straightforward — and decidedly less sweet — than other versions of the classic Vietnamese soup, the only flavor that punctuates the meaty broth is the subtle licorice perfume of anise. Thin slices of rare beef and herb-flecked meatballs bob in the glorious liquid along with silken noodles and, if you choose to add them, fresh herbs and bean sprouts.

Everything about this magical soup points to the fact that Joyful House is an outstanding Vietnamese restaurant. And that's correct — but it's only part of the picture of what makes this four-month-old eatery such a delight. Flip past the first three pages of pho, bánh mì and vermicelli bowls, and you come to a section of the menu advertising crawfish, shrimp and crab boils that seem more appropriately placed at one of the numerous seafood-boil restaurants that have opened across town in the past year. For a newcomer to this particular style of cuisine, Viet-Cajun, it might seem like an odd combination. However, to anyone following culinary trends, it's an indicator that Joyful House has quietly brought to town one of the hottest styles of cooking in the country.

Unless you've watched chef David Chang's Netflix show Ugly Delicious or follow national food publications, the term Viet-Cajun is likely a new one. The cooking style, however, is not and traces its roots back several decades to Houston and the Vietnamese refugees that put down roots there following the Vietnam War. As the story goes, members of this community were quickly enamored with the open-air crawfish boils they'd encounter in Houston, and they eventually began to put their own spin on the genre, incorporating Southeast Asian flavors with traditional Cajun ones.

The genre soon became intensely popular in Houston and eventually Los Angeles. It wasn't until Houston chef Trong Nguyen of Crawfish & Noodles received a James Beard semifinalist nod for Best Chef: Southwest in 2018, though, that the style became white hot. It has since spread to other cities across the country, and now, St. Louisans can try it here, too.

Linh Ly (the face of Joyful House) and her family discovered Viet-Cajun food throughout their travels and fell in love with the flavors. When the time came for them to move their international grocery store across the street from its original address on South Grand, they saw it as an opportunity to bring this style of cooking to St. Louis.

Although their original store was adequately sized for a grocery store, the new digs were not only significantly larger — they also came with a full-size commercial kitchen and dining room. Family members got to work concocting recipes both from memory and in accordance with their own flavor preferences and opened their doors in late September 2019 to share their creations with the rest of the city.

Joyful House's large dining room is a blank canvas for enjoying this colorful cuisine — literally. The restaurant is glaringly bright, outfitted in pale, icy gray-blue paint and a white wall of carved tiles. There have been a few attempts to bring character to the space — a cool, sea-themed mural of a fish, crab and bowl of noodles at the front door as well as red garland heart wall-hangings hung every few feet on the sparse walls, likely a nod to the then-upcoming Valentine's Day holiday. It's a bit sterile, but it's much nicer than what you'd expect from a restaurant inside of a grocery store.

Joyful House more than makes up for such bare-bones decor with its colorful food. Like the pho, the Vietnamese side of the menu shows the Ly family's prowess in the cuisine of their homeland. The bánh mì đặc bit, for instance, is perfection of the form, beginning with the shockingly fresh Vietnamese baguette that is as crisp and flaky as a croissant on the outside and pillow-soft inside. The bread serves as a base for layers of thinly sliced pork, pâté, pickled vegetables and herbs, and a garlic mayo infuses every bite with pungent creaminess. 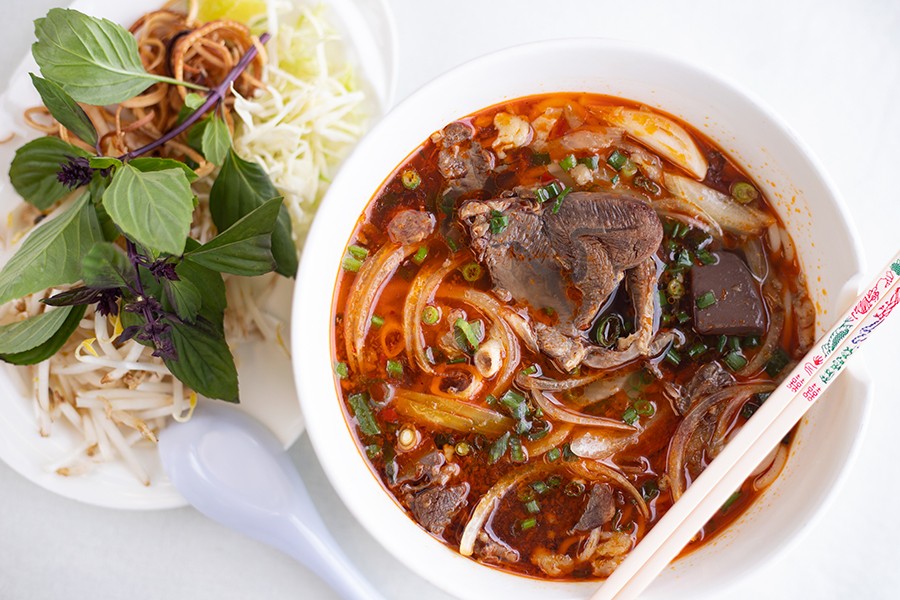 If Joyful House's pho is a soothing bowl of comfort to the palate, the bún bò hu soup is an energizing jolt of electricity. The noodle soup is heartier in texture than the pho, its broth scented with lemongrass and ginger. However, the real treat is the layer of fiery chile oil that slicks the top of the bowl. The spice is a striking contrast to the fatty pork patty, pork feet and beef shank contents of the soup. The layers of texture and flavors are magical.

The Shaking Beef, or bo luc lac, is another excellent dish. Cubes of tender steak are soaked in a soy-forward marinade, coated in black pepper, then seared with white onions and bell peppers. The marinade mingles with the beef's juices, forming a glaze that soaks into the accompanying rice — a simple dish, but a dazzling one nonetheless.

Even a dish as straightforward as the Vietnamese-style chicken wings is revelatory; juicy meat is coated in light yet crisp breading that is minimally seasoned to allow the dark meat's flavor to shine through. However, the restaurant's must-have poultry dish is the quail, which is flawlessly grilled so that the outer skin develops a pleasantly bitter char that complements the meat's subtly sweet marinade.

The quail, alone, is enough to make Joyful House a standout, but the Viet-Cajun side of the menu seals the deal. Boils include any combination of shrimp, crawfish, lobster, crab, mussels and clams and are served with corn, sausage and potatoes. The components are very similar to a Louisiana-style boil, but the key difference is the sauce and spices that give the seafood its unique flavor. This, in addition to the fact that the sauce is tossed with the seafood after it's cooked, makes for a more intense and thicker layer of sauce that can be soaked up by all of the components.

Joyful House offers straightforward garlic butter or lemon-pepper sauces. However, the standout is its Joyful Sauce, a unique blend that pairs chile heat and garlic with a ginger perfume. You can get any of the sauces to your desired, four-point spice level (Joyful Sauce is at a minimum of a level two); the level three, or medium-spiced, was enough to tingle the lips and tongue without causing forehead sweat.

The seafood boils are likely why you come to Joyful House, but they should not overshadow other dishes on the Viet-Cajun menu, including the shrimp stir-fry, or tôm xào hành gừng. Massive, prawn-sized shrimp are lightly dusted in flour, then sautéed with ginger and scallions; the flour forms a silken coating for the plump, snappy shellfish. Accented with sliced white onions and sprigs of green onions, this is the best-executed shrimp dish I've had in recent memory. 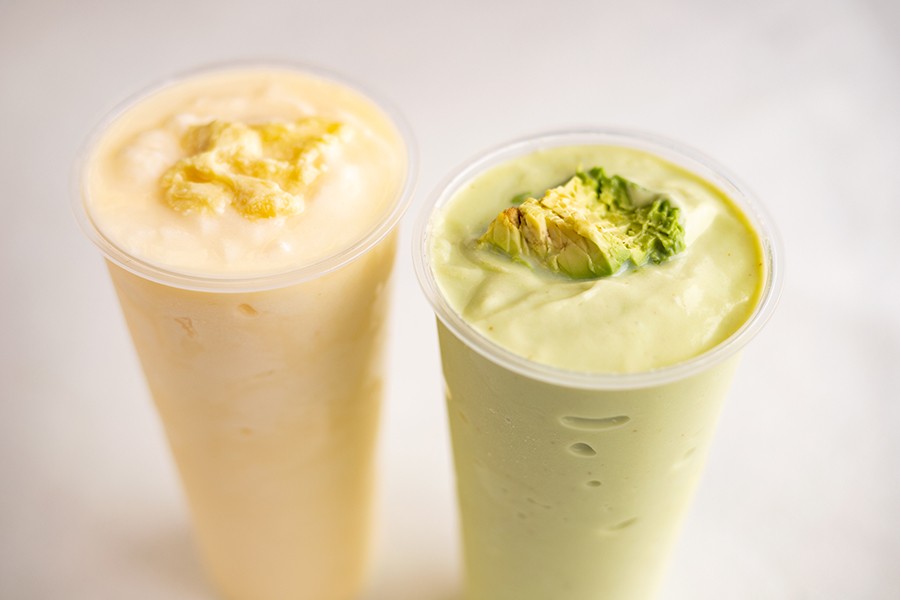 Joyful House is not all about spice, but you can go that route — and if you do, the restaurant offers several fruit smoothies to cool the heat of a level-four seafood boil. If you haven't experienced a Vietnamese-style avocado smoothie, this is a perfect opportunity to enjoy the creamy, subtly sweet treat. For the more adventurous, the restaurant also offers a durian smoothie, which is perhaps a good training-wheels-style introduction to the controversial fruit. Blended with cream, ice and a touch of sugar, the durian is more like a really funky vanilla-mango-flavored custard with a distinct onion flavor. 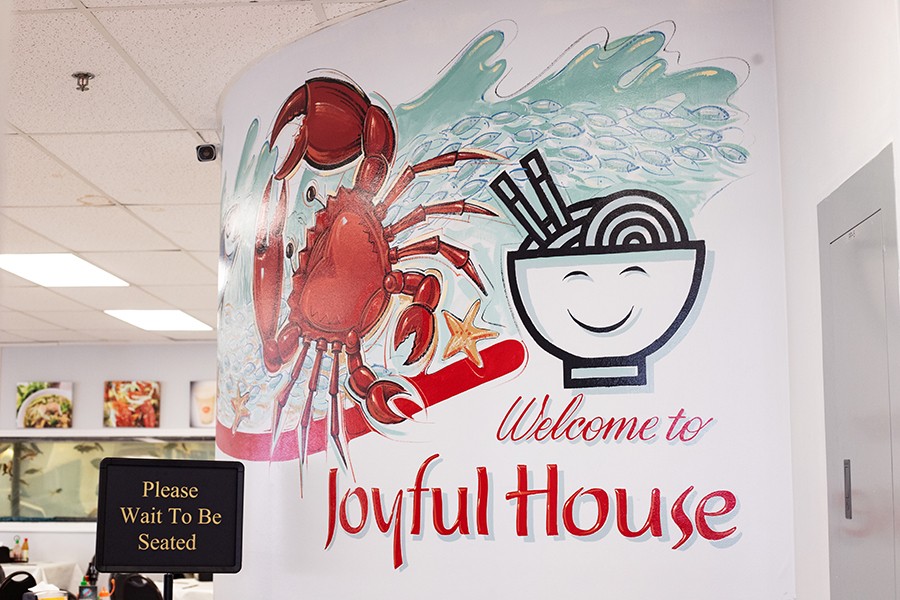 The durian is a memorable experience, but one that, if you put aside your preconceived notions of the fruit, is wholly enjoyable. It's exactly like Joyful House in general — if you keep an open mind about what Vietnamese food can be, you're in for a treat.