VIDEO: Water Bottles Being Thrown at City Cops During Protest 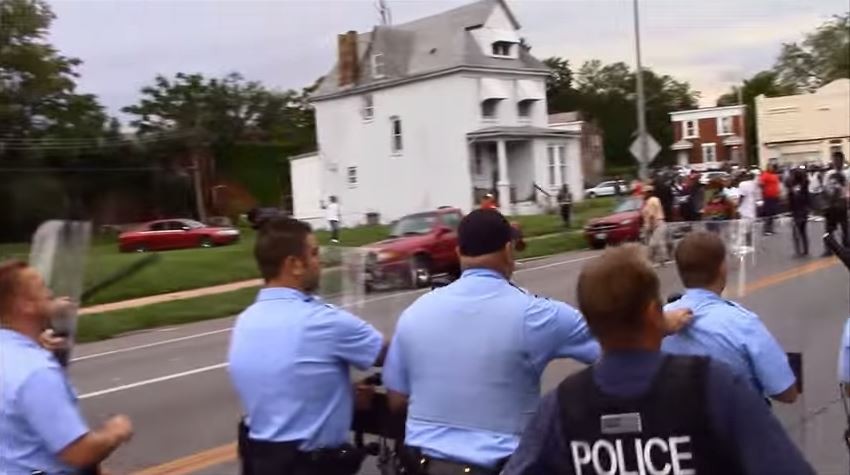 Now we have the police's version of what happened.

His basic narrative: Protestors were blocking traffic at Page Boulevard and Walton Avenue. Cops made some arrests, then "peace was restored," so officers left. Protestors then returned to Page and Walton and again blocked the intersection. When the police asked those protestors to get on the sidewalk, they began throwing some "glass bottles" and "bricks," causing officers to break out their protective shields.

Dotson promised to release video of that moment. Here it is:

The video shows what appear to be a few plastic water bottles being launched. It also shows some still photos of rocks that were allegedly thrown at officers.

Dotson says the police then asked people to disperse because it was an unlawful assembly. That didn't work, so they deployed inert smoke bombs, "like you would see at the Fourth of July." When that didn't work either, police then shot tear gas canisters.

You can see photos of spent canisters here and here.

Earlier in the day, police claimed in an incident summary that they'd been working in the area more often lately in response to other crimes. Here is their entire report:

Officers were in the neighborhood as it has been plagued by violence (see incidents below). Members of Special Operations and the Tactical Unit were executing a search warrant. As officers were about to make entry into the house, two young black males armed with guns ran out the back door.  Suspect #1 was armed with a gun with an extended magazine while Suspect #2 was armed with two guns and had a quantity of crack cocaine. Officers in the rear alley ordered the suspects to stop and drop the guns. As the suspects ran, Suspect #1 turned and pointed a gun at the officers.  Fearing for their safety, two officers fired their weapons at Suspect #1.  One officer fired one gunshot and the other officer fired three gunshots. Suspect #1 was struck by gunshots. Suspect #1 dropped his gun and continued to run through a gangway and collapsed in the 1200 block of Walton. Suspect #1 was pronounced deceased on the scene. Investigation revealed the gun in Suspect #1 possession had been reported stolen from Rolla, Mo. Suspect #2 fled the scene and remains at large. There were other individuals in the house that were taken into custody without incident. A total of four guns (including the suspect's gun) and a quantity of crack cocaine were recovered.  As is department policy, the two the officers have been placed on administrative leave.  The investigation is ongoing. The Force Investigative Unit is handling the investigation.  Once the investigation concludes, the finding will be handed over to the Circuit Attorney’s Office for review.

Victim #1 was located lying on the sidewalk suffering from gunshot wounds to his side, torso and legs. The victim was unconscious.  He was transported to the hospital where he was pronounced deceased.  Investigation revealed witnesses reported hearing multiple gunshots in the area. On 08/18/15 at 2:00 a.m. officers responded to the 1400 block of Academy for a shooting.  Investigation revealed Victim #2 was also shot in the 700 block of Aubert.  Victim #2 stated she was in the area attempting to buy illegal narcotics when she heard gunshots and realized she had been shot in the thigh.  Victim #2 delayed reporting the incident believing her injury did not require medical attention.  Victim #2 was transported to the hospital where she was listed as stable.  The investigation is ongoing.

Officers responded to the location as ShotSpotter indicated multiple gunshots possibly from different weapons were discharged. Upon arrival, the officers were flagged down by by the victim who stated he and another person were inside the above business when they heard multiple gunshots outside the store. There were numerous gunshot holes discovered in the building. No injuries were reported.  The investigation is ongoing.

The victim stated he was driving to his daughter's home and get lost in his travels.  The victim pulled his vehicle over and was attempting to call his daughter, when a black male approached and entered his vehicle.  The suspect took cash from the victim's pant pocket before exiting the vehicle.  The suspect then entered a black, older model four door vehicle and left the scene.  The victim followed the suspect in his vehicle, but lost sight of the suspect in the area of Walton and Page.  The victim then stopped his vehicle in the area of Page and Walton and asked two black males for assistance. When the victim exited his vehicle to speak with the males, they got into his vehicle and drove away. The aforementioned incidents are two separate incidents involving the same victim.  The investigation is ongoing.  Update: The victim's vehicle was recovered on 08/18 in the 1200 block of Bayard.