By conventional standards, Henry is a spokeswoman for a cause. She runs WAR's Facebook page, maintains the group's website and writes press releases. But her son's plight changes that equation. Henry's campaign to change the registry is deeply personal. How could it not be?

Joseph — who agreed to be interviewed around two months before he found himself in a standoff with FBI agents, and on the condition that his real name not be printed — sits on one of the thick red couches in the living room. He looks like a more slender version of his big brother, with the same thick beard, dark hair and hazel eyes.

"You can't live in fear," Joseph says, describing his journey from Marine to the brig to sleeping in a bedroom in his mom's duplex.

And yet to some extent, fear is the reality of the registry, he says. At any moment, his life could come crashing down. His job and housing situation could still be ripped away if one nosy neighbor or co-worker raises an alarm.

"I've learned that people are going to either like me or not going to like me," he says. "So, I put it out there, tell them the story. If they like me they like me. If they don't they don't."

Of course, he doesn't tell everyone. He recognizes that a certain level of dishonesty is necessary for survival when it comes to interacting with strangers, neighbors and co-workers.

"A couple months ago," he adds, "I was at work and they were having a talk about child molesters. Stuff like, 'If one was in my neighborhood I'd beat the shit out of 'em.' I work at a place where if someone did find out, I could easily have an 'accident' that would maim or kill me."

But after Joseph returned to the U.S. in the spring of 2007, he was promptly arrested by military police and shipped to the brig at San Diego's Camp Pendleton.

Asked about it now, Joseph pauses, taking several seconds to compose his answer. "It was addiction," he finally says. "I didn't get the right help for it."

At first, just finding Joseph was a challenge. He'd seemingly disappeared, and no one at his base could tell the family where he was. It took more than a week of frantic calls to find out why he'd been jailed.

In some ways, however, Joseph says he was fortunate. After a year in the brig, he was offered a plea deal: 48 months in a military prison, with twelve months of that spent in the Navy's Sex Offender Treatment Program in San Diego.

Joseph was released on parole in April 2010. But the nightmare wasn't over: Three months later, U.S. Marshals raided the house Henry and her then-husband shared in De Soto. Joseph was dragged away in handcuffs and returned to California. Henry's computer was confiscated, and she claims a parole officer cited the detection of child pornography on the hard drive as the cause of the raid. But, six months later, she says the military investigators reported finding no such files. The raid resulted in no new charges against Joseph.

Still, Joseph was told while in the Navy's custody that returning to life on parole would slap him with additional restrictions, including a mandatory GPS tracker. He opted to serve out the rest of his sentence in the brig. By the time Joseph was released in March 2011, his mother was already an active member of existing registrant support groups, and a burgeoning organizer in her own right.

That was the same year Henry helped found WAR. At the behest of the other co-founders, she agreed to become the public face of its advocacy operations.

Behind the name, explains Henry, is a message of empowerment for women like herself, mothers who want to push back the tide crushing their kids' futures. Henry knows what parents are going through, what it's like to be thrown into a registry system that exists without bars and robs its inmates of any chance for absolution.

"If there's anything that can be done to bring about change, women will do it," Henry says confidently.

She has no idea that in a matter of months, Joseph would sit in this same living room, alone, afraid, holding her pistol and texting his brother to say goodbye to nieces and nephews for him. 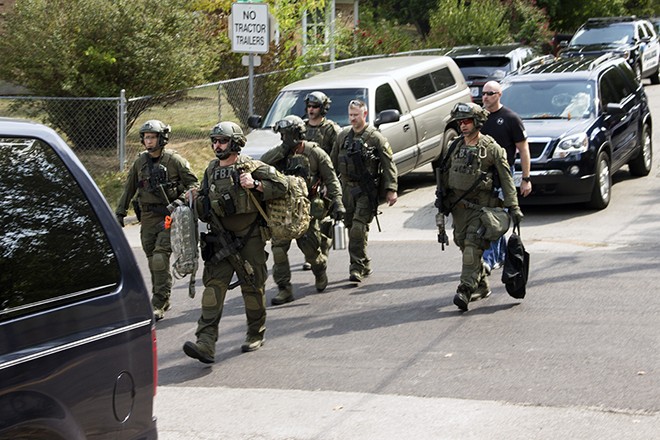 The morning of September 25, Henry's son, Joseph, woke to unexpected knocking at the door. Peering outside, he was greeted with the sight of FBI agents bristling with rifles and tactical gear.

The 32-year-old former Marine retreated into the house. Inside a closet, on the top shelf, he closed his fingers around the handle of his mother's revolver. He counted the bullets. He texted his older brother with instructions for his funeral.

But he didn't kill himself. After twelve hours, his standoff ends not with suicide, but surrender. By the time Henry arrived back in St. Louis at 2 a.m. the next day, he was already in custody.

Henry worries that a new indictment is only a matter days or weeks away.

"There's a lot of things weighing on my mind," she says outside the courtroom that Monday. Joseph's beard has grown out since August, and seeing him in a prison uniform breaks her heart, just like it did ten years ago.

The gun charge alone is serious enough. If this raid actually uncovered something this time? He could be facing years of prison.

Still, even if convicted, it's likely that Joseph will one day again be released back into society, into the arms of Missouri's lifetime registry. If current trends persist, he will join Adam's son among the thousands of new faces and names listed on a public database that could get him fired, evicted or killed by a vigilante. Once again, he will have to find a place in a society that, generally, would rather he rot or at least stay far, far away.

Henry concedes that the news of her son's arrest could push people away from WAR, but she's not considering stepping down or out of her public role. She has too much to do. There's an international hate studies conference at Gonzaga University in Washington to prepare for. She has activists and parents in every state who still need help, advice and comfort. There are legislators to call. There are men ringing the WAR support line who need to hear that there's a reason to live.

And there's Joseph, too.

"He would be disappointed, I think," she says. "He doesn't want me to give up anything because of him. Whatever comes out, whatever happens, then we'll deal with it.