PHOTO BY MABEL SUEN At Vicia, "Naked Vegetables" are more than just an expensive veggie tray.

What is the difference between Vicia's "Naked Vegetables" and crudités? I find myself pondering this question as I tuck into my second meal at the four-month-old darling of the local — nay, national — food press. Even before it had a name or a location, the place was already garnering hype, including a nod from Eater, which ranked Vicia among the most hotly anticipated restaurants in the entire U.S.

I'm mindful of this as I stare at what is essentially a platter of raw root vegetables. There's been no heat applied to the heirloom radishes, carrots and turnips. They haven't been grilled or sautéed or even blanched, and not a dash of olive oil, butter or even salt dares to defile their pristine flesh.

Though this was my second time ordering the "Naked Vegetables," billed on the menu as a "Snack," I was just as perplexed. I found myself questioning whether my enjoyment was pure, or whether it had been influenced by the knowledge of how you're supposed to feel about such a restaurant. Was chef Michael Gallina playing a trick? After all, we sat transfixed by an appetizer that has a lot in common with the sort of veggie platter you'd find at a baby shower. With apologies to Freud, isn't a carrot just a carrot?

This time, however, I'd brought with me a veteran chef, an elder statesman of sorts to help shine light on the situation.

"Every menu is a conversation," he offers. "You have to think of this in terms of what the chef is trying to convey." And when I take a bite of one of the knobby, twisted carrots, which taste of the earth from whence they came, it hits me. Gallina is indeed trying to tell a story, and these are the opening lines of an epic poem.

If you've ever been to a traditional Japanese tea ceremony and experienced the way the simple act of pouring a cup of matcha can make the hairs on the back of your neck stand at attention, then you have an idea of what it's like to dine at Vicia. In these rituals, it's not that the tea — or in this case, the carrot — is "better" than other teas, that the vessels are nicer or the setting is more elegant. Instead, the defining characteristic of such an event is that every last element of the experience is imbued with intention.

Gallina and his wife Tara know this. As chef de cuisine and service captain at the revered Blue Hill at Stone Barns in New York, the pair have been steeped in the ceremony of food and service.

In Michael's native St. Louis, where the couple settled more than a year ago, the Gallinas began their conversation with diners through a series of pop-up dinners under the name Rooster and the Hen. Those events introduced the city to their vegetable-forward philosophy, even as they allowed the couple to observe the preferences of their future patrons.

Though those preferences helped to inform many things about Vicia, the Gallinas never lost sight of their vision. This is not a traditional meat and potatoes spot — something that should be clear by their description as "veggie-centric." Midwestern-sized portions are not the norm, entrees are not composed and traditional coursing is out the window. Instead, you choose from a selection of offerings and assemble your own tasting. (They also recently announced the addition of a more formal tasting menu, beginning this week.)

If their name — Latin for a cover crop that's planted to replenish the soil — underscores their thoughts about food, their choice to locate in the Cortex district represents their desire for a restaurant that is about more than simply satisfying appetites. The "innovation community" is designed to be both a gathering spot and a testing ground for cutting-edge concepts. As Cortex's flagship restaurant, Vicia fits right in.

That's as much by its design as its philosophy. The building that houses Vicia flows seamlessly into the industrial slice of real estate between the Central West End and Midtown. The squat glass box sits near the corner of Boyle and Duncan avenues, looking from the outside more like a culinary museum than a restaurant.

Inside, however, the space has a warmth in spite of its sleek black and white color scheme. It feels like a contemporary farmhouse, with whitewashed exposed brick, pale wooden tables and white-framed windows that separate the bar from the dining room. Contemporary, plant-themed artwork — including a stunning black and white painting of echinacea and three-dimensional branches that hang from the ceiling at the back of the bar — give life to the space.

The restaurant has two cooking spaces: a large wood-fired hearth that sits to the back of the massive covered patio and an indoor kitchen, which is partially separated from the dining room by a glass window. Through the clear partition, diners watch cooks gather around a central hub, where they seem to be in a perpetual state of discussion. The setup seems built to eschew the traditional hierarchy of the kitchen "line" in favor of a more collaborative approach.

The approach yields one stunning dish after the next. "Snacks," like the previously mentioned nude veggies, are delightful in their simplicity — a carrot that makes you question if you've ever really eaten one before, a radish that snaps and coats the tongue with the sharp taste of pepper. The vegetables are accompanied by a selection of dipping sauces, including luscious goat cheese fondue, whipped lard flecked with vegetable pulp salt, pleasantly pungent vegetable-top pesto and creamy hummus. But Gallina's talent is less in those simple accompaniments than in the way he invites you to experience plants we often take for granted with an almost Buddhist beginner's mind.

That approach continues throughout the early courses. In place of a tortilla, purple turnip tops, sliced so thin they are translucent, serve as a wrap for either succulent pork shoulder or mushroom "tacos." Sugar snap peas and charred vegetable mole give a bitter, earthy accent to the filling that is offset by a tart strawberry sofrito.

Prosciutto-wrapped nectarines are grilled to soften their flesh and concentrate the flavor of both the fruit and the ham. It's a lovely summertime appetizer, as is a salad of shaved squash, first-of-the-season cherries and day lilies, paired with stracciatella cheese that wraps the dish in luxury.

For Vicia's "Goose Egg," an appetizer destined to be the restaurant's signature dish, Gallina stuffs the hollowed-out shell with a soft scrambled egg that's so delicate it makes a soufflé seem hearty. Also inside the shell are pureed English peas, shiitake mushrooms and smoked butter. Whipped together, they form a concoction that is at once decadent and the texture of seafoam.

Gallina uses the outdoor wood grill for his main courses, making them feel both modern and primal. On his selection of Berkshire pork (the shoulder, belly and jowl on my visit) he plays the same trick he does with the carrot — I find myself questioning whether I've ever actually feasted on pig before. The meat itself is sublime, but a bright cherry compote, served on the side, adds a welcome sweet and sour snap to the rich meat.

On any given night, a dish like the pork will be one of roughly five mains, only two of which use meat as the centerpiece. The rest are indeed veggie-centric, using meat as an accent, if at all. That doesn't mean you'll leave hungry. Beets, glazed in beef fat and charred over wood, retain their earthy flavor, though the fat and flame give it a richer, heartier dimension. A side of silken yogurt and tahini dipping sauce is so delightful (it somehow tastes like understated buttercream) you run the risk of dousing the beet in it.

Perhaps the evening's biggest shock, however, came in the form of charred cabbage. A large hunk is grilled, then served atop a salami-infused lardo that acts like a gravy. Pungent sauerkraut cuts through the richness, showing off the cabbage's versatility. It's so heartily savory, you wonder why it's been relegated to a supporting role all this time.

Talented pastry chef Summer Wright, who counts Daniel Boulud as one of her former employers, revels in her invitation to experiment alongside Gallina. A buttery tart shell filled with bison grass custard and mulberry sorbet is crowned with oat crisp and flowers — the rare "too beautiful to eat" dessert that is actually worth eating. For her "Strawberries and Cream," a strawberry sorbet is paired with an equally mouth-puckering goats' milk ice cream, crisps of meringue and herbaceous wood sorrel. The tastes are familiar, yet on each, Wright's unexpected use of verdant herbs shows her command of flavor. 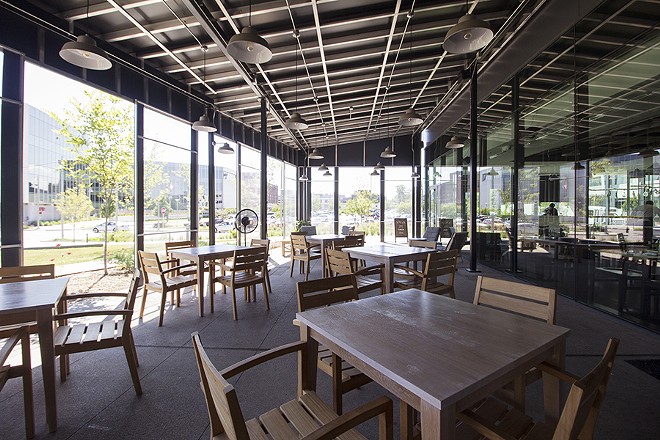 Vicia is open for lunch, when it transitions from a sit-down event to a counter-service setting. Though this service is decidedly less formal, it still retains the splendor displayed in the evenings. Dishes like a grain bowl, filled with wheat berries, corn, beans, charred cabbage and vegetable top pesto, or a mushroom quiche with the texture of crème brulee, can be ordered à la carte or mixed and matched in smaller-sized portions, allowing you to sample several items in one sitting.

Whatever you choose, do not miss the wonderful chilled cauliflower soup, puréed and garnished with charred vegetable mole, or the salami and cheddar sandwich, topped with arugula and strawberry mustard on focaccia. Both exemplify the restaurant's accessible approach to lunch, even while the food and the setting make this one of the most elegant places in the city to dine during the day. 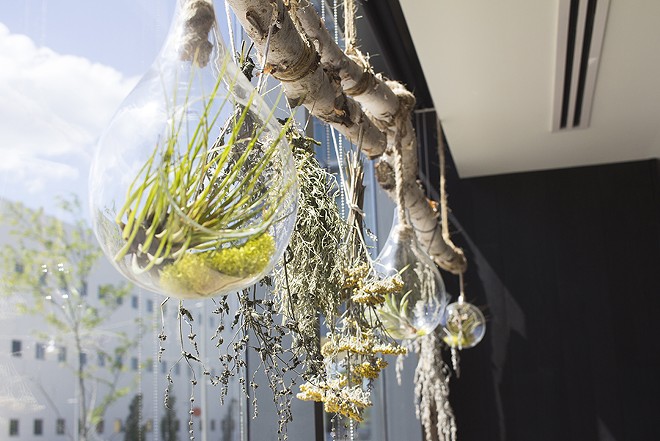 Vicia's elegance, however, is not found only in the food or the atmosphere. Under Tara Gallina's watch, the entire restaurant staff embodies the nobility that can be found in professional service by providing detail-oriented, (seemingly) effortless and genuine hospitality. Everyone on the team appears invested in making Vicia what it is.

By everyone, I mean every last member of the staff. One busy service, we noticed that the entire back of the house had gathered around the central prep table in the kitchen for a tutorial on heirloom corn. It wasn't just the chef and his right (and left) hand cooks: Everyone in the kitchen was called to soak up the knowledge — even the dishwashers, who also participate in wine tastings with the rest of the service staff. This sort of inclusion and investment translates into a team that makes Vicia more than just a restaurant.

Which, in turn, makes a carrot more than just a carrot.