Chris Bertke knew he was on to something — and perhaps in a bit of trouble — when he did his first vegan junk-food pop-ups a few years ago. He'd been approached by his friends, Carrie and Sam Bauer, about helping them open a restaurant inside a converted gas station in Benton Park, and he thought pop-ups would be a good way to test out his theory that there was an appetite in the area for greasy-spoon, plant-based food. He'd felt it himself. It had been 26 years since he'd gone vegan, but he still could not shake his craving for Jack in the Box tacos, the deep-fried beauties he'd last tasted so long ago. Surely, his fellow vegans felt the same way.

Bertke got his answer when, in just ten minutes, he sold 300 tickets to his first pop-up. He got the same response to the next one, and the one after that, and before he knew it, he wasn't just doing research for a forthcoming Benton Park restaurant — he was leading the charge for a reimagining of all that is possible with plant-based cuisine.

That reimagining — a shift from what he calls "California style" vegan cuisine characterized by raw foods and chia smoothies to the guilty pleasure of plant-based junk food — is the basis for Utah Station, the Bauers' fast-casual eatery where Bertke serves as executive chef. Only five months into its operations, the restaurant has already become a wildly popular gathering place, drawing crowds of vegans, vegetarians and omnivores alike for its whimsical riffs on fast-food pizza and its bar-like atmosphere.

Reflecting on how popular the restaurant has become, it's hard to imagine that Utah Station was originally conceived as something entirely different. When the Bauers first approached Bertke about helping them with the place, they had plans to turn it into a pizzeria. Though Bertke was looking for a way out of his job in catering and was eager to work with the Bauers, he was not so sure that pizza was the way to go. The city seemed saturated with similar concepts, he thought, and if they wanted to do pizza, they needed a way to differentiate themselves.

That's where the vegan junk-food idea came in. A self-taught cook who has been experimenting with vegan recipes for years, Bertke felt that if he could tap into the nostalgia of hearty American comfort and fast food, Utah Station could both satisfy vegan and vegetarian diners and also appeal to omnivores who were either concerned about the amount of their meat consumption, or just wanted to try something different — a "gateway drug" for trying vegan food, as he likes to joke. 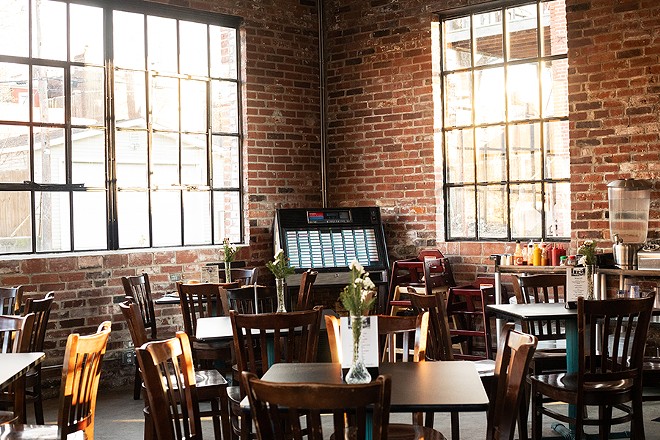 Bertke had plenty of time to hone the concept. He started doing the vegan junk-food pop-up more than two years ago, thinking that the restaurant would come together much quicker than it did. Instead, it took every bit of that time to do the buildout because of the logistics and bureaucracy involved in converting a gas station into a place where people can safely eat food. He used the time wisely, however, perfecting his recipes and building a buzz for the place that, when it finally opened its doors this past August, has been packed almost nonstop.

You understand the allure the moment you walk inside. Unlike the stereotypical plant-centric restaurant (at least the ones I've visited), Utah Station feels like a restaurant and bar that happens to have vegan food, rather than a vegan restaurant. This is partly due to the fact that, while roughly 90 percent plant-based, the restaurant does carry a few meat items, such as a grass-fed burger, a BLT and a handful of meat toppings for its pizzas. As such, Utah Station feels inclusive to all dietary needs. 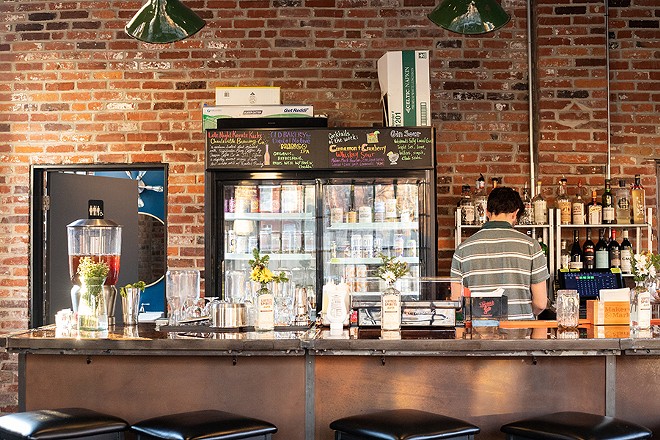 However, a lot of the buzz relates to the space itself, divided into a takeout counter and pizza kitchen on one side and the main dining room and bar on the other. Concrete floors, exposed brick and green-painted garage doors tease its former life as a gas station, while landscaping around the substantial patio make you feel like you are in an oasis in the middle of the city. Even during this time of year, the roaring fire pits make Utah Station's outdoor space an inviting place to have a drink.

Chances are, you'll have no choice but to embrace its outdoor environs; Utah Station is so busy that its first-come, first-served seating can be hard to come by. Set up as a fast-casual operation, guests order food at the bar, then try to find a place to sit. Get there early enough, and it's not usually a problem. Arrive after 6:30 p.m. and it's a free-for-all.

Noshing on Utah Station's vegan toasted ravioli — flattened, golden brown discs stuffed with filling that shockingly mimics ground beef — you get the hype. The appetizer is the sort of unfussy bar food you crave to pair with a beer, its zesty marinara and vegan Parmesan perfect complements to the pasta fritter. Had I not known the dish was plant-based, I would have assumed it was made with the traditional meat filling. 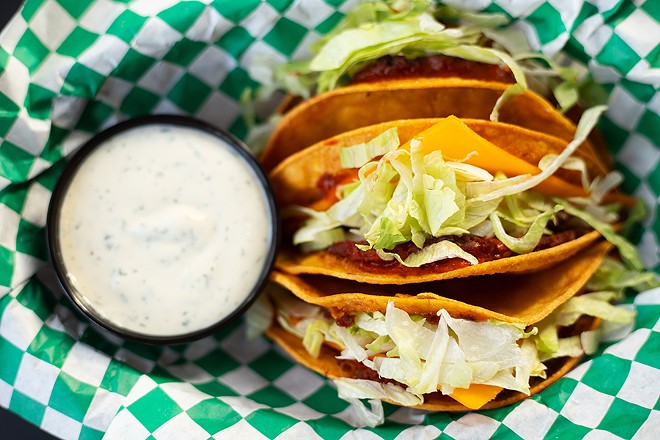 This same filling is found in one of Utah Station's signature items, its Crack Tacos. You can taste Bertke's years-long efforts to recreate his beloved Jack in the Box tacos in this plant-based rendition; he positively nails it, all the way down to the sliced vegan American cheese and fried lettuce. Here, you wonder if Bertke is less a chef than a magician.

The vegan poutine is another success. Crispy, thin-cut fries serve as a base for a silken gravy that tastes like Thanksgiving. Though there were no meat drippings to fortify it, Bertke relies on savory herbs like sage to give it depth; shreds of vegan cheese add a suggestion of creaminess, even if they do not have the melty richness of dairy cheese.

Surprisingly, though, Utah Stations' Roast Veef and Chedda manages to capture that molten cheese effect. Velvety as the gooey cheese that comes with ballpark nachos, almond milk-based Chedda soaks over the faux roast beef and into the bun. Covered in the luscious cheese blanket, the Veef is a more-than-adequate substitute for roast beef, an effect Bertke credits to the way he cooks his plant-based proteins. Rather than simply steaming them, he sears, braises and roasts the Veef in the same way he would roast beef, resulting in not only better-tasting faux meat, but a much better texture than is typical of meat substitutes.

Bertke's faux meat reaches its apex as part of Utah Station's gyro. Seasoned with Greek spices, seared and cut into slices, the gyro "meat" was so similar to the traditional lamb and beef product served in non-vegan versions that I could discern no difference between the two. Crisp tomatoes, olives, lettuce and creamy vegan tzatziki, all nestled into grilled pita bread, finished off this plant-based masterpiece.

There were a few dishes that were less successful, however. Like the Jack in the Box tacos, Bertke tries to replicate McDonald's Big Mac in vegan form (here called the Big Mak), and though he gets the flavors right, the texture leaves much to be desired. The buns are way too big for the thin, faux meat patties and completely overtake the sandwich. The texture was an even bigger problem: The patties and bread melded into one another, resulting in a mushy amalgamation.

Another issue had less to do with conceptual problems and more with execution in an overly busy restaurant. Overall, Utah Station's pizzas — vegan, gluten-free or topped with meat — are adequate. However, on one visit, our dine-in order was served inside a to-go box. This was not a problem except it seems that the box was an attempted Band-Aid for a flaw in the pizza itself. The restaurant had run out of pizza dough, and the one being used for our order had split when it was being prepared. The cook tried to mask this by hiding it in a box, but instead, the crust-less toppings melded to the cardboard. When we attempted to scrape them off and put them on the crust (which was little more than an exterior ring of dough), the cardboard came up with them, rendering the dish inedible.

A few minutes after this pizza was served, an employee arrived at our table with a dessert and an apology. Apparently, the cooks realized it was a bad decision to serve this after the fact and regretted that they'd done so. I appreciated the gesture, and I commend them on admitting a mistake. However, it speaks to the larger issue for Utah Station, which is that it is almost too successful for its own good, at least this early in the game.

Bertke admits as much, noting that the restaurant outgrew the space the day it opened. Envisioned as a low-key, neighborhood spot, Utah Station is a bona fide juggernaut, not only attracting diners from all over the city, but from as far away as Chicago, Denver and everywhere in between. The restaurant can barely keep up with demand; the micro-sized kitchen is too small for food storage, so Bertke has to prep everything he serves daily. On the weekday night of the pizza incident, there was a carryout order line that stretched well out of the door. That the restaurant ran out of pizza dough by 7 p.m. is not shocking. Bertke, is, after all, a human being who can only do so much. 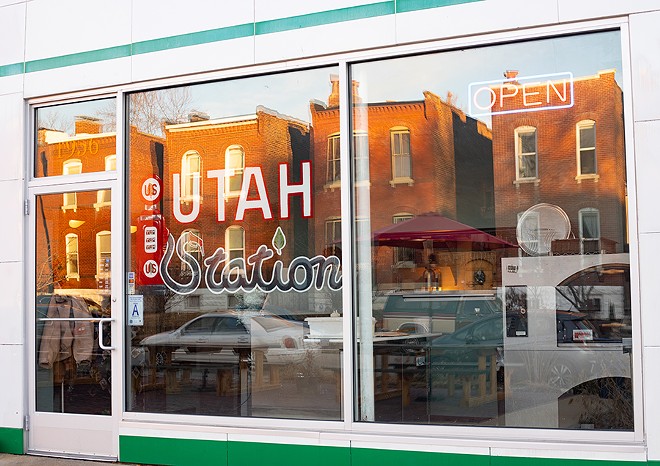 Of course, there are worse problems to have than too many customers, but for Bertke and company, the fact that everyone wants what they're selling is their only limiting factor. Clearly, they've tapped into what people want, and once they can get it to them, there's no stopping them.