A Human Being Died That Night

Written by Nicholas Wright. Adapted from the book by Pumla Gobodo-Madikizela. Directed by Patrick Siler. Presented by Upstream Theater through May 28 at the Kranzberg Arts Center (501 North Grand Boulevard; www.upstreamtheater.org. Tickets are $25 to $30.

You don't expect a play written by a South African, adapted from a South African book about South Africa in the immediate post-Apartheid era, to feel downright American. And yet there are moments in Upstream Theater's current production of Nicholas Wright's A Human Being Died That Night that are disquieting in their familiarity. It is in the stiffness of the language when a white man and a black woman discuss race, and it's present in their shared inability to understand how the other person thinks. And it is there in the gulf still separating these two at the end, even after years of conversation, that is most familiar of all.

Of course, the fact that the man, Eugene, is a notorious secret policeman who has killed possibly hundreds of black South Africans may have something to do with that gap. Can you understand the mind of a man who admits to murdering numerous people like you, even as he protests that he has been wronged by the system that empowered him? Director Patrick Siler and his cast (Jacqueline Thompson and Christopher Harris) escort the audience on a fraught journey focused not on the mind of a killer, but — surprisingly — on the path toward understanding, true forgiveness and reconciliation. It makes for a long, strange and rewarding trip to undiscovered country.

Wright's play is based on a book about South African psychologist Pumla Gobodo-Madikizela's real-life interviews with Eugene de Kock, dubbed "Prime Evil" by the press for his innumerable atrocities during Apartheid. Intrigued by Eugene's private apology to two of his victim's widows, Pumla seeks him out to discover why he wanted to apologize. Eugene is currently serving two life sentences plus 212 years for his crimes, so he's easy to find. 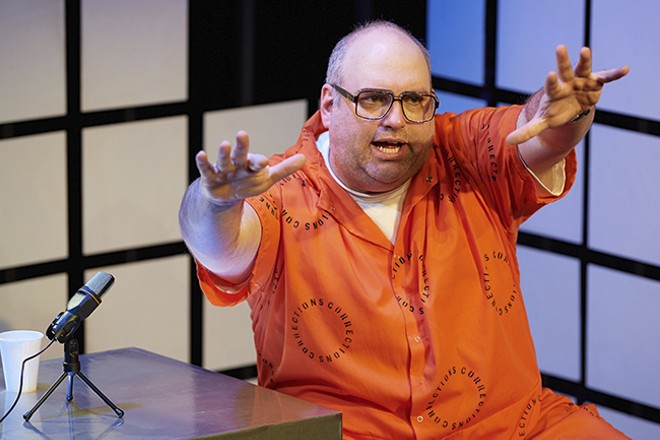 Set designer Patrick Huber's stylized jail cell serves as the backdrop for their many conversations. As played by Harris, Eugene is not what you'd expect. His thick glasses and polite manners combine with his paunch to make him appear almost cuddly. He admits to torturing and killing people, while also admitting to being haunted by their faces day and night. His matter-of-factness is chilling, but his overriding manner is one of wronged anger. Eugene's superiors in the police force — the men who ordered him to kill so many times — are still free, and in many cases, still running South Africa, because they blamed their crimes on him, or on police officers who have since been killed. "It's like the dead are a criminal class these days," he complains.

Thompson has to skate a fine line as Pumla, who wants to remain professional in her dealings with Eugene, even as she seeks to divine his true motives. Pumla addresses her concerns about the propriety of their relationship directly to the audience, conveying her inner conflict. She feels the need to comfort him at one point, but is repulsed when Eugene tells her how surprised he was that she "took his trigger hand" in hers. Neither understands what the other meant, not he her moment of empathy, nor she his brutal statement.

Part of Pumla's impetus is her work on South Africa's Truth and Reconciliation Committee, or TRC, which gave amnesty to killers on both sides of the apartheid line if they publicly confessed to their actions. The hope was to heal rifts on both sides. Instead it has fueled Eugene's anger, because he was one of the few punished after confessing. He's also aware that he simply cannot be released from prison without causing a million political problems, and that only makes him angrier.

This simmering anger might be the most familiar portion of the play to an American audience. Angry police officers, angry black communities, violence perpetrated by both sides — this is well-worn territory for us.

What's unfamiliar is the solution. At one point Pumla explains that the TRC's hearings are really for the victims. By getting answers about who killed their loved ones, they're able to relinquish blind hatred: "They're always looking for a sign to lay down their burden." Later she reminds him that "forgiveness is not forgetting," that the pain of loss will always be there, but that it's possible to move on.

Eugene eventually comes to his own bleak conclusion, and it's his first step toward forgiving himself for his many crimes. "We killed a lot of people. We fought for nothing."

You leave with the sense that if we don't set up our own national method of reconciliation., Eugene de Kock will have preemptively written our epitaph. And that is the most frightening revelation of A Human Being Died That Night.