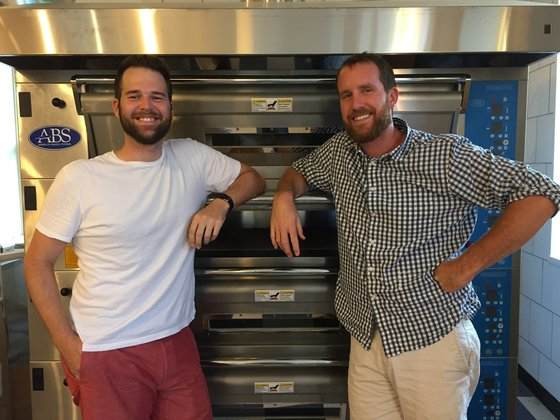 On the corner of McRee and Tower Grove Avenue in Botanical Heights, bread is on the rise.


Ted Wilson, formerly a baker at the recently shuttered The Good Pie, is on the cusp of realizing his dream: an artisanal bakery and bar called Union Loafers. The restaurant joins Old Standard Fried Chicken, Elaia/Olio and La Patisserie Chouquette to form one of the most interesting clusters of restaurants in St. Louis.

Union Loafers has been one of the city's most talked about restaurants for some time, but with no opening date in sight, Wilson, along with his his business partner Sean Netzer, has had little information to share.  Now, the duo is closer to a starting date, with a plan to light the ovens and open their doors. “We’ve been saying that we’ll be open in three weeks for three months,” Wilson says. “The one thing we’ve learned from construction code is that if you say a couple weeks, it really just means no clue.”


Their construction woes certainly have been many. While the two have been focused largely on learning the ins-and-outs of being first-time business owners, they had difficulty with their contractors which pushed back their plans of opening this summer. “There was a little confusion as to who held the responsibility for certain tasks,” Wilson laments. But he and Netzer have worked tirelessly with their team to make sure the building is exactly how they dreamed it would be.


Wilson and Netzer first met while working at The Good Pie in Midtown. Wilson fashioned Neapolitan pizzas, while Netzer slung whiskeys and draft beer at the bar. “We hit it off over a 6-barrel of Kentucky breakfast stout.” Wilson joked. Netzer left to work at 33 Wine Shop & Bar to expand his knowledge of all things spirits and Wilson left shortly thereafter to focus on the business plan for their bakery concept. “When we hatched this plan, we were originally going to go to Louisville and do more of the Neapolitan concept because it was what we knew, but then we realized we didn’t want to leave St. Louis,” Wilson confides.

“On my last night at The Good Pie, we sat over a beer and were like, ‘Think about a bakery/cafe’ and we’ve slowly been working on that ever since,” Netzer says.


The two found inspiration for their cheeky name in a classic routine by Abbot and Costello, mirroring their famous “Who’s On First” routine. “It was kind of funny to us, kind of playful. Neither of us take ourselves too seriously so it made sense,” recalls Wilson. “It was also very comfortable for our brand. This classic duo, and then something that’s also very tongue and cheek.”

But the pair acknowledge that the name may have annoyed a few contractors in the process. “I feel like I haven’t explained the name properly to some people and they look at me like I'm a jerk,” Wilson admits. “But overall, most people have enjoyed it.”


The restaurant will feature a rotating menu of European-style, handmade breads and sandwiches, with a small but unique wine list curated by Netzer. Customers will be able to purchase breads to take home. “We’ll also have local drafts and great single malt scotches — I’ll try to show people the breadth of the spirit. And it all ties back into bread because the unifying characteristic of whiskey is that it has to be distilled from grain,” Netzer explains.

“And we like to drink it,” Wilson adds with a laugh.


Wilson and Netzer say they are fortunate to have spent time honing their crafts in their respective fields, as it has allowed them to cultivate honest and sincere relationships with successful restaurateurs who are excited to see them excel. Although the entire experience has been years in the making, they both agree that the wait should be well worth it.

“The whole process has been such a slow-burn, but every bit of the investment feels right,” Wilson says.

“The amount of care that we’re going to put out on a plate or pour into a glass, we’re just so excited to share that with everybody,” Netzer says.


Towards the end of August, Union Loafers will open its doors to the public, whether they feel like they’re ready or not. The biggest hurdle for them so far has been getting their contractors to communicate effectively. But Wilson and Netzer are planning to make good on all the hype that’s grown around their new venture.

“As soon as that thing is turned on,” Wilson says, motioning to the industrial oven behind him, “I’m gonna live here.”