Union 30 Is Much More Than Another Hotel Restaurant

It's hard to walk through the front doors of the Hotel Saint Louis without letting out an audible gasp. The building's soaring lobby dazzles with so much gorgeous, historic detail it feels like you've stepped into a Gilded Age time capsule. Marble floors lead to a bank of golden elevators — original to the building's first incarnation as the Union Trust Company — and luxe peacock-blue velvet chairs beckon you to take a seat and drink in the beauty. Sink into one and look up, and you'll be awestruck by what's above: A vibrant stained-glass inlay, replicated from the original by a local artist, filters light through rich jewel tones as it fills the room. 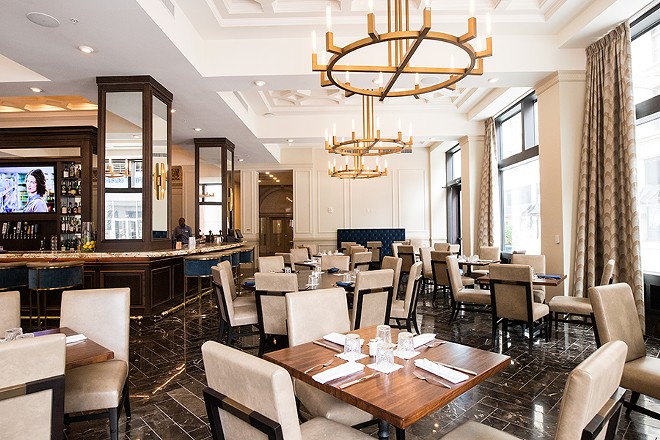 This stunning scene carries through to the hotel's restaurant, Union 30. The color palette from the lobby is also on display in the dining room in the form of light grey leather chairs, black wood and a massive bar outfitted with a light-colored granite top. Bronze wagon-wheel chandeliers provide lighting to an already bright space, while vintage crystal highball glasses and mismatched antique flatware adorn the tables and give the room character.

From an aesthetic standpoint, elegant Union 30 is miles apart from executive chef Matthew Birkenmeier's former home, Quincy Street Bistro. Birkenmeier took over the beloved neighborhood restaurant roughly two years before its closure last October, honoring its ethos as a quality, scratch kitchen that put out some of the best comfort fare in the city. Cozy and quaint with an almost down-home feel, Qunicy Street was the embodiment of a St. Louis neighborhood gathering place — the antithesis of an upscale restaurant inside a swanky hotel.

And that is precisely why Amy and Amrit Gill, the developers behind the renovation of Hotel Saint Louis, sought out Birkenmeier to run its restaurant. As owners of Restoration St. Louis, the husband and wife have centered their business around embracing the character inherent in historic properties — a philosophy they wanted to extend to Hotel Saint Louis' food. Persuading diners to see a restaurant in a hotel as something more than a "hotel restaurant" would be a heavy lift, but they knew their chances of success would increase with Birkenmeier on their team. 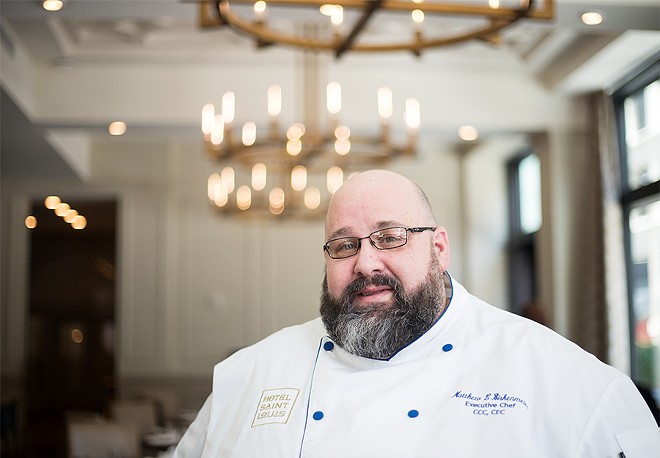 A veteran chef whose résumé includes everything from the influential Monarch to riverboat restaurants and a barbecue joint in Jamaica, Birkenmeier was up to the challenge. Infusing Union 30 with a distinct St. Louis character without making it a caricature, Birkenmeier has eschewed the tropes found in generic hotel restaurants for a menu of locally inspired offerings that would have been at home at Quincy Street Bistro.

The translation to an elegant hotel environment gives Birkenmeier's comfort food dishes a more elevated feel, but doesn't sacrifice authenticity. Conceptually, it works; I can only imagine the sigh of relief a weary business traveler experiences when she sees something like toasted ravioli, instead of a generic Cobb salad, on Union 30's menu. Here, Birkenmeier smartly substitutes succulent pulled pork for ground beef, resulting in a dish that marries a quintessential St. Louis finger food and the city's barbecue heritage. Crisp and golden fried on the outside, the ravioli is served alongside a tomatoey barbecue sauce that evokes local favorite Maull's. It's the t-rav version of a St. Louis backyard cookout.

Birkenmeier's nod to another St. Louis favorite, the much-missed Famous Barr French onion soup, is a masterpiece as stunning as the stained-glass window in the lobby. Studded with hunks of prime rib, the thick, gravy-like soup has a voluptuous mouthfeel. A thick crouton soaks in the beefy liquid underneath a layer of molten cheese. If there is a better version of French onion soup in the world, I haven't tasted it.

Though not a uniquely St. Louis dish, Birkenmeier's chicken wings are perfection of the form. Plump drummies and wings have a thick crunch coating that can be glazed in your choice of sauce. I opted for the sweet Thai chile version and was impressed with its restraint. Sticky in texture but not in taste, the sauce deftly balanced sweetness with vinegar to keep it from being cloying. 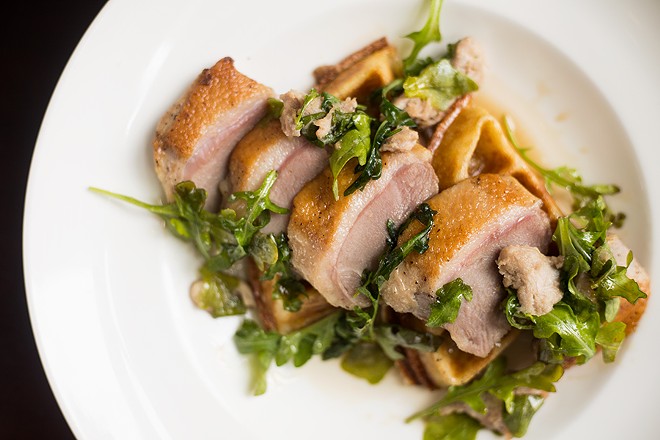 That balance is also apparent on the avocado caprese toast, which pairs the richness of smashed avocado and burrata with a blood-orange reduction and cherry tomatoes so ripe they pop in the mouth. It's all piled atop a thin slice of gluten-free toast which, though it tastes good, does not hold up to the heft of the toppings. I enjoyed eating it even if I looked like a hot mess doing so.

For entrees, Union 30's standout comes courtesy of its daily "Hot from the Smoker" special. I was fortunate enough to be there on barbecue chicken night and was impressed with Birkenmeier's offering. The chef marinates a half-bird for twelve hours in dry-rub seasoning, then smokes it for six hours — and every hour, he bastes the chicken in his signature bourbon barbecue sauce. The result is a barbecue chicken that is not sauced so much as encased in layers of glaze, which form a crust that traps the juice so the meat remains succulent. It's no wonder that the U.S. women's soccer team went through 75 leg and thigh portions one night while staying at the hotel, as Birkenmeier reports.

I was also impressed with the herb-crusted salmon, a flawlessly cooked piece of fatty, skin-on fish brightened with mouth-puckering tomato and caper concasse and peppery arugula. It's something you'd expect to see at a hotel restaurant, for sure, but the expert preparation makes it special.

Union 30 did, however, have some execution issues. The ahi tuna that tops a nacho appetizer was overcooked and, consequently, dry. Thankfully, the accompanying teriyaki glaze, wasabi aioli and cucumber peach salsa were so liberally applied that, while I might normally complain about the abundance, served to mask this defect.

I was also underwhelmed with the Duroc pork chop. The flavor was porky and rich, the result of the meat being dry-aged for fourteen days and prepared sous vide with duck fat. However, when the pork was finished on the grill, it was overcooked, resulting in a toughness that erased all of the sous vide groundwork. 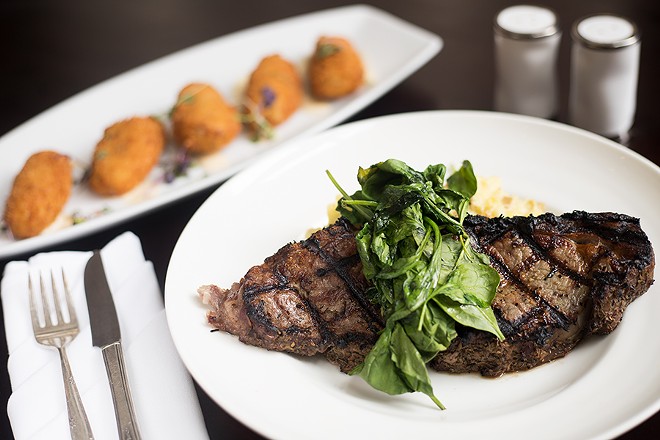 The strip steak had the same problem. Birkenmeier rubs a whole strip loin in a blend of Montreal-style seasoning, then cold-smokes the meat for approximately four hours, careful that its internal temperature never gets above 95 degrees. The result is a par-cooked steak infused with gentle smoke that, in theory, could be grilled to whatever temperature you desire. However, our requested medium came out well-done, which concentrated the smoke flavor and dried out the meat.

The "Hotel Saint Louis Raclette Smash Three-Stack Burger" was also not as rich as I would have expected from such a decadent-sounding offering. I expected a funky, oozing mess of juice and cheese, but was instead greeted with a fine-enough smashburger sparsely topped with semi-melted raclette. It's an adequate burger for a hotel, but in a city that is blessed with some damn good smashburgers, I wanted more. 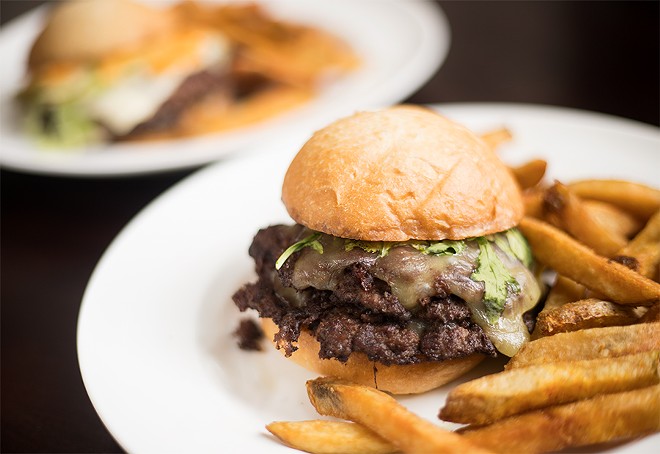 I also wanted more from the gooey butter cake. At a property determined to show off St. Louis' culinary offerings, I can't see an out-of-towner being dazzled by a pasty cake that had virtually no delineation between the crust and the filling. The brownie baklava was a much better end to the meal; the delicate phyllo dough encasing the rich, fudgey brownie adds a crisp, buttery texture. A scoop of salted caramel ice cream increases the decadence.

Birkenmeier could have simply served that chocolatey brownie in a dish with some vanilla ice cream, and it would have been nice enough. Instead, he tried something different and ended up with a memorable dessert. I applaud him for doing that with Union 30 overall, as well as his fierce commitment to using local vendors when pulling ingredients off a Sysco truck is the standard in corporate hotel dining. Granted, some execution issues take the wind out of Union 30's otherwise billowing sails, but overall, his efforts are a commendable celebration of St. Louis. Out-of-towners and locals alike should feel lucky to get a bite. 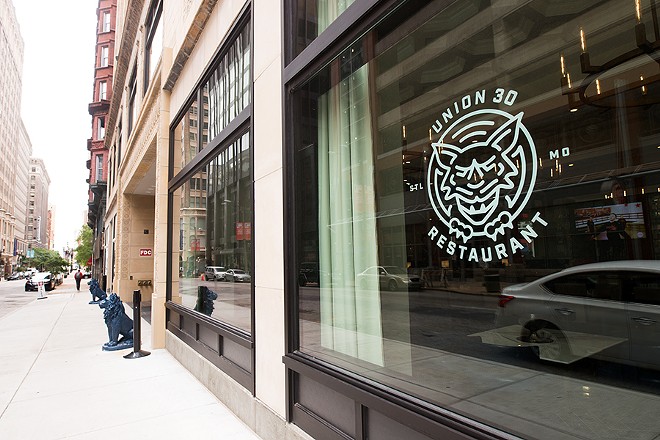