Tyler Gebhard was killed by a St. Louis County cop he knew, in a home where he was once welcome

COURTESY OF THE GEBHARD FAMILY Tyler Gebhard played varsity football at Affton High and then walked on at Southeast Missouri State. 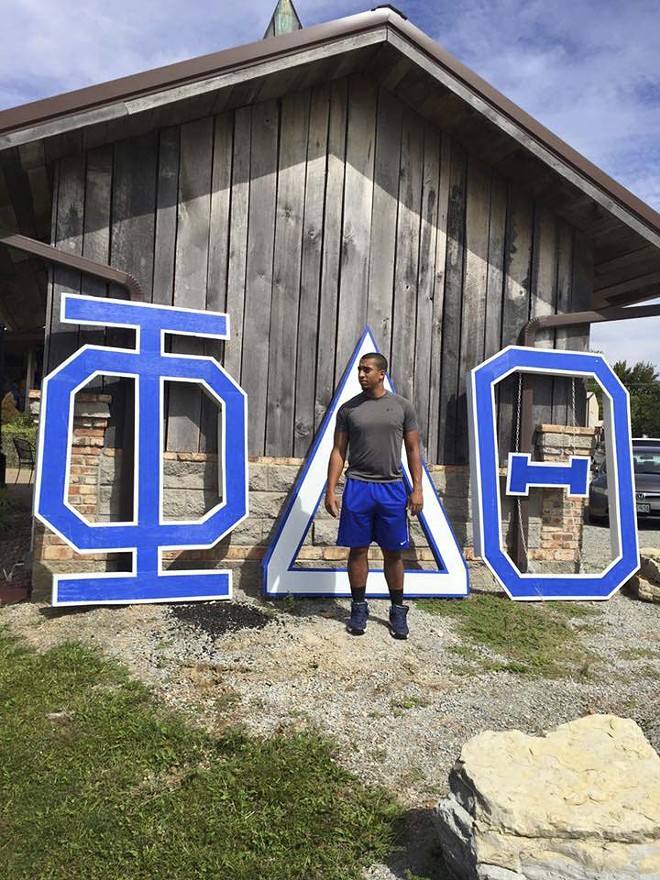 For all his generosity and good spirits, Tyler soon ran into some serious problems in college.

In the spring of 2015, life should have been good. Tyler had joined a fraternity, and even though they hadn't offered him a scholarship, Southeast Missouri's football coaches were impressed enough by his size and speed to offer him a spot as a backup fullback.

But on April 17, campus police responded to reports of a man swinging a golf club at cars. Outside the football team's training facility, two squad cars pulled into the parking lot where a young man in a black shirt, blue shorts and tall socks was jumping up and down.

"I saw him approach another squad car and then run backwards jumping up and down," one of the officers later wrote. "Due to my past training and experience it was clear the subject was under the influence of some kind of drug."

A trainer for the football team had called campus police after Tyler started acting strangely in the training room that morning. He told the trainer that he had smoked marijuana and insisted she turn him in to the NCAA, according to her written statement. He was not making sense; he asked her who she was and if she was perfect, the trainer wrote. She could not get him to calm down.

An assistant coach soon joined her, and they followed Tyler outside, where he ranted about Jesus Christ and NBA star Steph Curry, they told police. They watched as he ripped the gas tank lid off his Chevy and threw it, along with his keys, shoes and cellphone.

One of the first officers on the scene hopped out of his car with an extendable baton. As soon as the cop started walking toward him, Tyler laid down on the pavement and put his arms behind his back. The officer cuffed him, figuring he was witnessing the effects of a bad acid trip.

"He was having severe mood swings where he would be happy and would yell for officers to shoot him," the officer wrote in his report.

Police shackled his legs when, they say, he began to kick. They called an ambulance. "Am I Jesus Christ?" Tyler asked.

The Riverfront Times obtained copies of the police reports through an open records request. Asked about the incident, his grandmother says it was Tyler's first manic episode, characterized by what she would later recognize as "religious euphoria." He was briefly hospitalized and diagnosed as suffering from bipolar disorder, not a bad reaction to drugs. He returned to school, but stopped taking his medication not long after, telling his grandmother that a counselor didn't think he was bipolar.

A month later, football coaches recognized another episode coming on and contacted authorities. Tyler willingly accompanied the dean of students and a police officer to a counselor's office, and his grandfather drove down to pick him up. This time, Tyler checked into Mercy Hospital in St. Louis for an extended stay.

Marlene insists these are the only two manic episodes she and her husband ever witnessed. Her grandson may have acted erratically during them, but he was never actually violent, she says, nor was he ever charged with a crime.

However, Tyler's stepfather, Christopher Johnson, told police in a taped interview that the problems began much earlier, when Tyler was a teen, and could be frightening.

Johnson claims a sixteen-year-old Tyler attacked his mother with a pipe, after which he went to live with his grandparents. "He's had a lot of mental issues," the stepfather told police in July.

Marlene disputes Johnson's account of the incident but declines to go into detail.

"It is not the way it happened — I can say that," she says. "That was a family issue, and Tyler went to live with us afterward, and we never had an issue."

Similarly, she insists that other reported incidents have been misconstrued. A former college roommate who told campus police in April that Tyler warned him not to "get caught alone in the dark" was really a thief, she says; her grandson had caught the guy stealing from him. And she believes that the confusing mixture of angry and conciliatory Facebook messages Tyler posted on July 8 and 9 shows only the disjointed way his mind was processing his fear and concern after the recent police shootings.

Johnson, however, says his stepson was worked up in the days before his death. He told police that Tyler suddenly showed up at their door on July 7 and announced he was moving in — four years after his mother kicked him out over the pipe incident. Tyler instructed his younger sisters to bring his clothes in from his car, and then left as soon as they finished. The family did not see him again until he returned at 5:30 a.m. the next day. It was Friday, July 8, the same day he'd later visit the Boyds.

Johnson says he was getting ready for work when his stepson walked through the door, making bizarre statements.

"Oh, all kinds of odd stuff," Johnson later told St. Louis County police. "He said, 'I've been out,' and he said, 'I've outrun the cops in my car' and all this, and 'I've been doing this, and things are about to get bad.'"

Johnson had long ago adopted a system of appeasement to handle these types of situations. ("They say if it's raining meatballs, you've gotta go get a plate," he explained to police.) They chatted a little more, and Johnson headed off to work.

Tyler was crashed out on the couch when his stepfather returned later that day. Tyler woke up ten minutes later and left. He did not come back that night or Saturday morning.

Johnson says they grew worried after speaking to one of Tyler's younger sisters. She told them about a disturbing conversation on Friday. Tyler told her he was saying goodbye because he claimed to be "headed to Dallas to start killing cops," the sister says, according to Johnson. He reportedly told her he was never coming back.

Marlene says she has not spoken to her granddaughter about that conversation and cannot say what happened, but it seems likely Tyler was at the beginning of another manic episode. One of her daughters even called a friend at a small police department in north county and asked him to spread the word: If they encountered Tyler acting strangely, please react without violence, she said.

The family was trying to head off a tragedy, but ultimately it would not be enough.

"He was a great kid who had the misfortune of having a chemical imbalance of the brain known as bipolar disorder," Marlene says of her grandson. "In this world we live in, mental illness is a stigma. It's not treated like any other thing. If I went and told you my grandson had cancer, I'd have all kinds of support."