PHOTO BY MABEL SUEN The "L.E.O." is a twist on an eggs benedict with smoked salmon, caramelized onions, goat cheese, dill hollandaise and capers on rye toast.

Many years ago, David Kirkland was a house music DJ, creating layers of pounding rhythms to throngs of pulsating dancers in the San Francisco music scene. If you taste the biscuits and gravy at his new restaurant Turn, however, you might think his former gig was as a choreographer for classical ballet. So often, biscuits and gravy land like a load of lead in the gut, but Kirkland has somehow managed to make the Southern delicacy, dare I say, delicate.

Two light-as-air biscuits are halved and smothered with sage-perfumed gravy that tastes like Thanksgiving, its silken texture broken only by pieces of herbed turkey sausage. Microgreens and a few sprigs of fresh sage evoke a springtime garden. The restraint, subtlety and intention are striking.

For anyone who enjoyed Kirkland's cooking during his near-decade at Café Osage, such a masterpiece comes as no surprise. As executive chef at the Bowood Farms restaurant, the St. Louis native was responsible for translating the farm's bounty into hyper-seasonal dishes, often having to scramble when a harvest of 50 pounds of tomatoes or 70 pounds of squash would get plopped on his kitchen counter. The experience energized his creative side by forcing him to come up with different ways of using the same product — and helped to define his cooking. 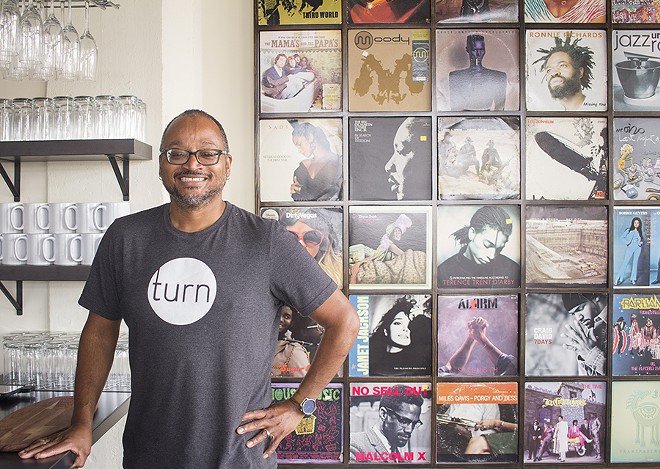 Kirkland's creative side is what attracted him to the restaurant business in the first place. A self-described "latchkey kid," he began experimenting with cooking at a young age and quickly realized that he had a passion for it. During college, he worked in kitchens to make money, then got increasingly serious about the field as he graced the lines at restaurants around town including Frazier's and Venice Café.

In the late 1990s, Kirkland entertained the idea of going to culinary school in San Francisco, but though he moved there, that plan never materialized. Instead, he began working in retail management for Crate & Barrel by day, taking on DJ gigs by night as an outlet for his creative energy. When he moved back to St. Louis in 2005, he continued his career in retail but stopped DJing. In need of an outlet, Kirkland was all ears when a friend of his wife's boss approached him about opening Café Osage.

That was 2007, and by the time he left the Central West End eatery in 2016, Kirkland had made a name for himself and was looking to branch out on his own. He launched his catering company, David Kirkland Catering, but had dreams of owning his own place.

The opportunity arose when he was approached by mega-donors Ken and Nancy Kranzberg, who were looking for a chef to occupy the restaurant space at their new multi-use arts space, .ZACK. Kirkland saw the offer as a win-win: Not only would he have a restaurant of his own in a building filled with other creatives, but he would be able to continue his catering business at .ZACK's events space.

Befitting its location in an arts building, Turn feels like the sort of stylish, modern restaurant you'd find in a museum (that's no back-handed compliment: museum restaurants around the country have upped their game over the past few years). It's a bright and inviting space with large glass windows on two sides, grey geometric-print carpet and lantern-like light fixtures that give off a soft glow. Sleek white chairs surround wood-colored tables, a bar offers diners a place to belly-up for some brunch-time cocktails and — in a nod to Kirkland's passion for music — a mural of album covers decorates one wall, floor to ceiling.

Turn is strictly a daytime operation, and Kirkland has created a menu of wonderful breakfast and lunchtime dishes that give the feel of a sophisticated, yet approachable, brunch. Pancakes, flecked with whole grains, taste of vanilla-scented funnel cake and achieve the ideal fluffy inside and crisp exterior. Paired with local butter and warm maple syrup, you'll want for nothing more from breakfast.

Then again, that would mean missing out on the biscuit flight, a board of four rotating varieties ranging from the slightly smokey spiced poblano and cheddar to a sweet orange and cranberry. The biscuits are served with local honey, butter and Kirkland's signature "Slow Jam." On this occasion, he served a pleasantly tart raspberry version that is so delightful, it's no wonder he's contemplating a line of jams as a side project.

Turn's "L.E.O." is an homage to a dish that, when Kirkland's father used to make it, delighted the entire family. It's clear why it was such a hit. Smoked salmon the texture of rose petals is served atop toast, then capped with over-easy eggs, Baetje Farms goat cheese, hollandaise and green onions. As with the biscuits and gravy, a dish that could seem overly heavy instead presents as perfectly balanced — the hollandaise has a light mouthfeel, and the cheese is used sparingly without being sparse. It's a gloriously haute take on bagels and lox.

Cornmeal arepas, covered with mild chorizo and over-easy eggs, cheese and avocado, are a nod to the Mexican food Kirkland enjoyed while he was living in California. He adds a touch of hatch chiles, giving the dish a subtly spicy kick without allowing them to take over. This sort of restraint is seen throughout Kirkland's cooking.

Kirkland shows off his creativity on burger offerings. The first, a daily special called the "Turn Burger," pairs a mammoth ground beef patty with bacon, Gruyere cheese and a sweet tomato jam. I would have preferred the jam to have been tempered a bit; it was refrigerator cold against the warm burger. However, this is a minor point. The burger is still delectable.

The reuben patty melt, meanwhile, is a work of pure genius. Corned ground beef is presented between two slices of griddled rye bread with Swiss cheese, rich Thousand Island dressing and sauerkraut so pungent it makes your eyes water. This perfect sandwich has all the taste of a Jewish deli reuben, but it lacks the slide and accompanying mess you get from the usual strips of corned beef — though, granted, the meat is so juicy you might still end up wearing your lunch as a badge of honor.

It's all wonderful, and made even better by the soundtrack: Kirkland's eclectic music collection. Yes, that patty melt is tasty, but when it's eaten while bouncing to Stevie Wonder's "I Was Made to Love Her," the experience is simply magical.

Kirkland keeps the music playing to give guests a peek into his other passion. As he explains, cooking and DJing are the same to him — the motions put him into the same headspace. In both, you are always thinking of the next step, looking for the right moment to add something and slowing down or speeding up depending on what the instance requires. At Turn, he proves his talent, no matter which way you spin it.