PHOTO BY THEO WELLING Jason Nelson gained fame as the vocalist for MU330. Now his many, many tribute bands keep him busy.

Superjam is not a tribute to a specific band so much as, in the words of its guitarist, "a tribute to a time period, from about '75 to '85." The band's name is a direct nod to the stadium shows that filled the Astroturf-era Busch Stadium of the 1970s. Its playlist nods to specific St. Louis tastes; a song like Loverboy's "Turn Me Loose" might get a spin by an '80s band elsewhere, but few are throwing down pitch-perfect versions of Head East's "Never Been Any Reason." Whether performing the hits (the Who's "Eminence Front") or more obscure, KSHE Klassic-style tracks (Angel's "Tower"), the band's hallmark is a degree of versatility.

As Superjam plays a set at Schmitty's on Memorial Day, the classic rock playlist matches perfectly with the audience — guitarist Eric Lysaght calls them "lots of nice people with lots of nice motorcycles." With fans gobbling up pork steaks and drinking Busch underneath the bar's massive, roofed patio, Superjam's takes on Uriah Heep and Kansas bring dancers out to the floor, as Jeff Gallo's bass and Lee Skyles' drums thunder through the dusk of li'l Smithton, Illinois, on a picture-perfect holiday weekend. It's what this band does, every time out, on stages at bars, street festivals and casinos: It brings a very specific kind of party soundtrack, filling a niche that St. Louis rock fans didn't know they needed. Until they were offered just that.

For the musicians in them, tribute bands provide regular paychecks — and typically much better ones than if they were playing original material. Not surprisingly, the musicians in Superjam don't limit their membership to just one band.

In addition to vocalist Dave Farver's work as a children's music act called Mr. Saxophone, he's also an auxiliary member of the biggest tribute band in town, the Pink Floyd sensation El Monstero, playing the group's sold-out gigs as the band's sax player. He was previously in another rock & roll cover band called Kingpin and plays Sting in a tribute to the Police called King of Pain. More recently, after David Bowie's passing, he and some friends formed a tribute called Ashes to Stardust.

Lysaght's path is equally dotted by projects. Though he tells a fan at Schmitty's that he's only in "two or three bands," he shares membership in Ashes to Stardust and has a cover duo called Rainbyrds.

He also plays solo shows at restaurants throughout town, and has sung and written for a deeply personal originals project named Salisbury, gigging and recording occasionally with that group. But cover/tribute work remains his bread and butter. Some bands have come and gone, like Nothing Shocking, a Jane's Addiction tribute, while others, like Superjam, have stuck around to make the house payment.

"This is what we do to make money," he says. "Playing out with friends." 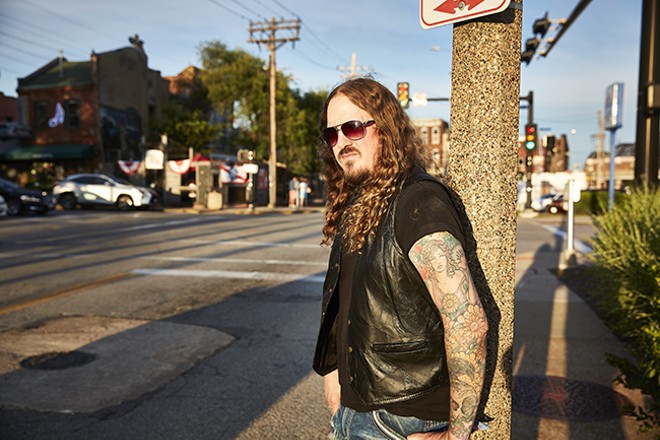 While Superjam has been holding down a certain niche in the local tribute scene for a half-decade, a huge number of acts have sprung up in recent years, covering the music of acts great and small, including everyone from Styx (Grand Allusion) to Radiohead (Exit Music). No less than three local tribute bands pay homage to the Grateful Dead.

While cover bands — like Farver's former band Kingpin, which has a playlist of rock songs from the '60s to today — might perform a wide swath of music by a huge number of acts, tributes are more single-minded, tackling a single artist or musical movement. Some do it for the passion, playing only an occasional gig. Others do it for money: El Monstero, the Pink Floyd tribute that dominates The Pageant's live calendar in December, earns its members five-figure salaries for their week of performances. El Monstero is so successful, it's even engendered a side project, the Led Zeppelin-inspired Celebration Day.

"It is genuinely amazing to me how many good tribute acts there are in St. Louis," singer/songwriter Kevin Renick observes. "For people who never had a chance to see the originals and in many cases can't anymore, the varied and exciting tribute bands around here at least give you a chance to approximate the experience."

And that's a good thing for local musicians who can master both skills. An original band without a big body of work or fan base might not even crack $100 in cover charges and tips by playing at a local bar, if it can net the gig in the first place. A tribute act might well command $1,000 for a weeknight club date and roughly double that for a street festival or special event, with organizers typically shelling out another $250 to $500 for lighting, sound and staging.

Renick acknowledges that his Neil Young tribute, Shakey Deal, exists to make a dollar. But it also pays, yes, tribute to an act that he's been tied to for a while.

"Doing a Neil Young tribute evolved absolutely in a natural way for me, not only because people kept telling me I sounded like Neil Young, but because he was a big influence on my own music, and I found that I had a real feel for his songs and his entire approach to things," he explains in an email. "I play with some fantastic musicians who get it — meaning both the raw, primal Crazy Horse stuff and the delicate, melancholy acoustic songs."

"There seems to be a lot of support for all things 'comfortable' in this town," he believes, "from the music to the food to the clothing; we hold close what we know and grew up on. Strong roots in tradition is a nice way to put it, perhaps because so many never leave permanently. 'Where did you go to high school?' exists because most people here actually went to high school here."

From there, he believes, bands that pay homage to the songs you hear on the radio are a natural extension. "The Show Me State has been a difficult one to introduce new ideas/music/food/fashion to, but I have noticed this changing, so it seems to be opening up its mind a little more these days."