In October 2016, I picked him up from a bus depot at the Gateway Station in downtown St. Louis where he had an hour or two to kill before traveling the final leg to Springfield. Working at a newspaper is one of those jobs that becomes an identity. Those who leave tend to switch to something still of that world, maybe a turn to the "dark side" — public relations or advertising. Some go into teaching. I've known a few who went on to law school.

It's not that they can't do other things; it's just outside their imagination. So I would not have ever suggested Chet go into trucking, but it made sense. He had always been a rigorous planner, meticulously lining out his gear, arranging remotes and strobes for jaw-dropping sports images. He was also mission-driven and a relentless traveler, embedding with doctors traveling abroad on humanitarian missions to nearly 30 countries and photographing life in Afghanistan, Kosovo, Africa or just relaxing in Bermuda.

Over hamburgers and beers at Maggie O'Brien's pub, we talked about the trucking industry, the news business and the state of the country. It would become part of our routine. As Chet moved from trainee to company driver to now leasing his truck toward ownership, we would meet semiannually at some truck stop or empty parking lot around St. Louis and catch up at whatever restaurant was nearby.

He estimates it took a year tor so to get over his anxieties and feel comfortable in the truck.

"I like it," he tells me during a recent phone call. "I tell them all the time, 'Send me wherever you want to send me. I'm going.'"

But even as Chet has settled into a routine of living out of his truck for four weeks or more at a time, the country that he crosses from one end to the other has seen an upheaval unlike any in our lifetime. In March, the weight of the coronavirus first began to settle on the consciousness of the United States. Restaurants closed their dining rooms, or closed entirely. Pro sports suspended their seasons. Schools shut down.

"I'm an OTR (Over the Road or long haul) commercial truck driver, and here's why the coronavirus terrifies me," he wrote at the top of a Facebook post later published by another of our former co-workers in the Putnam County News and Recorder (in New York state). Chet described the craziness of the run on toilet paper and antibacterial wipes, the necessary limits on the number of people in crowds, limits that would later be revised down to zero. But from his perch in the cab of an eighteen-wheeler, as people began to wrestle with the severity of the pandemic, he could see a missing piece of the conversation.

"It seems that no one is willing to acknowledge the very real potential mass chaos if the perishable and grocery supply chain network is disrupted in this country," he wrote. "Imagine for a few moments if a percentage of the unseen low-wage farm, livestock and migrant workers, along with meat, seafood and poultry processing plant workers, as well as the warehouse workers, loaders, dock workers, and truck drivers were to succumb to the virus. This is an industry where none of us can 'tele-work' from home, and our work affects the health and well being of every single person in this country. Everybody has to eat."

Not long after he wrote that, clusters of outbreaks started popping up at meatpacking plants across the country. The Centers for Disease Control and Prevention issued a report in early May that revealed about a fifth of the plant workers in South Dakota and Iowa had contracted the virus and nearly 5,000 workers in nineteen states had tested positive. Chet's routes occasionally include some of those same facilities, not to mention all the truck stops and other warehouses along the way.

"Some places have it together," he says. "You know, they check us at the gate, they check temperatures. They request your license, and they spray it and wipe it down when they give it back to you. ... Quite a few places don't even want you to get out of the truck, other than to open your doors and back up to the building."

Lots of truck stops have closed their drivers' lounges, restaurants and showers. They require masks. "Other places, it looks like nothing's happened. There are extremes. ... I've gone some places, and nobody's wearing a mask, maybe one worker. None of the guests and none of the people in the cars at the truck stop that are walking in are wearing masks. None of them are concerned, and it's like, 'What the heck is going on here?'"

Predictably, the attitudes of his fellow truckers vary as well. There are the drivers like Chet who have built extra steps, like disinfecting surfaces in the cab a couple of times a day, into their normal safety routines, and there are skeptics, too. 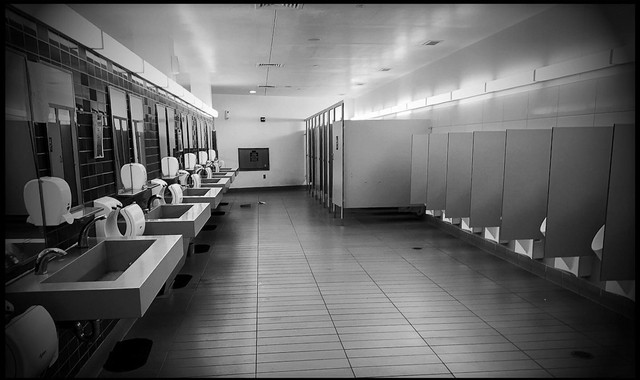