Every so often, my friend Chet Gordon has a stopover in St. Louis, and we meet for dinner.

Chet is a long-haul truck driver these days, so we stick close to the interstate. Ideally, he's able to find a parking spot among the tractor trailers at a Love's truck stop in the far northwest corner of St. Louis County, and then we drive in my car to one of the closest sit-down restaurants, a LongHorn Steakhouse next to the failed St. Louis Outlet Mall in Hazelwood.

Driving there on our last visit felt like touring an abandoned metropolis in a zombie movie. We descended St. Louis Mills Boulevard past an emptied-out Babies R Us and curled along the perimeter of acres of unused parking spots. In less than two decades, a complex designed to efficiently funnel thousands of people to shops, restaurants and a movie theater had dwindled to accommodating... us, a handful of other diners and a few workers at a surprisingly hard-to-kill chain restaurant.

"Hello, my friend," Chet says whenever we meet again.

For nearly 30 years, he was a photojournalist in New York and New Jersey. Now that he's a driver, I follow along on his Instagram feed as he posts photos from across the country. Truck stops at dawn in Wyoming. Downtime between loads in Indiana. Fried catfish at the Travel Plaza in Big Cabin, Oklahoma. 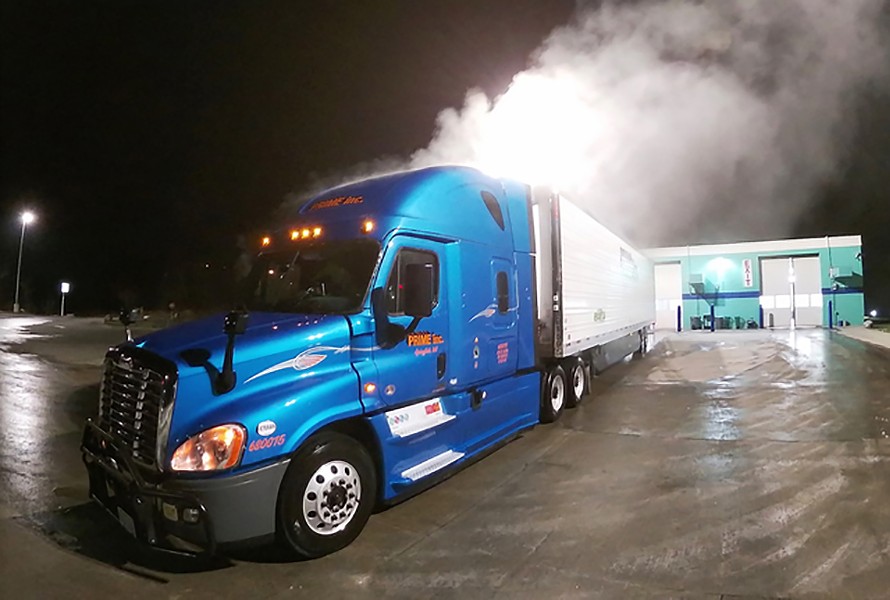 We worked together for more than six years at a newspaper north of New York City. Neither of us were married at the time, and we sometimes stayed up all night covering chaos or winding down over beers. Newspapers were faltering even then. It hadn't reached the despair of a hollowed-out mall in the suburbs, but you could feel the dread.

I took another job in 2013, and shortly after, the hedge fund that had bought the formerly family-owned newspaper before I left began slashing jobs. It laid off talented editors, outsourced the copy desk to Austin, Texas — and eliminated the entire photo staff. For me, it was like leaving a party early and learning later there had been a house fire at the end of the night.

Chet and the other staffers, who had helped teach me the business, scattered in search of new jobs. Despite decades of experience, they quickly learned there were few options. Chet spent nearly three years battling to keep going in a career he'd begun in 1988 after serving in the Marine Corps. He landed a spot as the first photo editor of a lifestyle magazine group, only to be laid off again. He took jobs as a laborer for a contractor and in the warehouse of a grocery wholesaler as a way to buy time until he could return to his profession. But he wasn't going to return.

"I'm literally laying in bed one night," he says, recalling a conversation with his future wife. "I sat up, and I said, 'You know what? I'm going to drive a truck.'"

It wasn't completely out of the blue. Not long before, he'd ridden along on a cross-country trip for a personal photo story on a long-haul driver and returned with new interest in the industry. And at the grocery wholesaler, he chatted up drivers who dropped off pallets of food, quizzing them about the pay, lifestyle and best trucking companies.

After his late-night epiphany, he sent an inquiry to one of the companies, Prime Inc., based in Missouri. Over the previous three years, he'd sent dozens of applications to newspapers and former humanitarian aid agency clients with no luck. But a recruiter from Prime looked at his military service and his decades as a hardworking news photographer, and quickly offered him a bus ticket from New York to the company's headquarters and training facility in Springfield. Chet delayed for another couple of weeks, and then he boarded the bus for the Midwest.

"A twenty-plus-year career in the news business," Chet says, replaying the mental hurdles of leaving his old career and joining Prime. "It was tough. It was difficult. It was shocking. It was shocking, yeah. But I made the right choice."