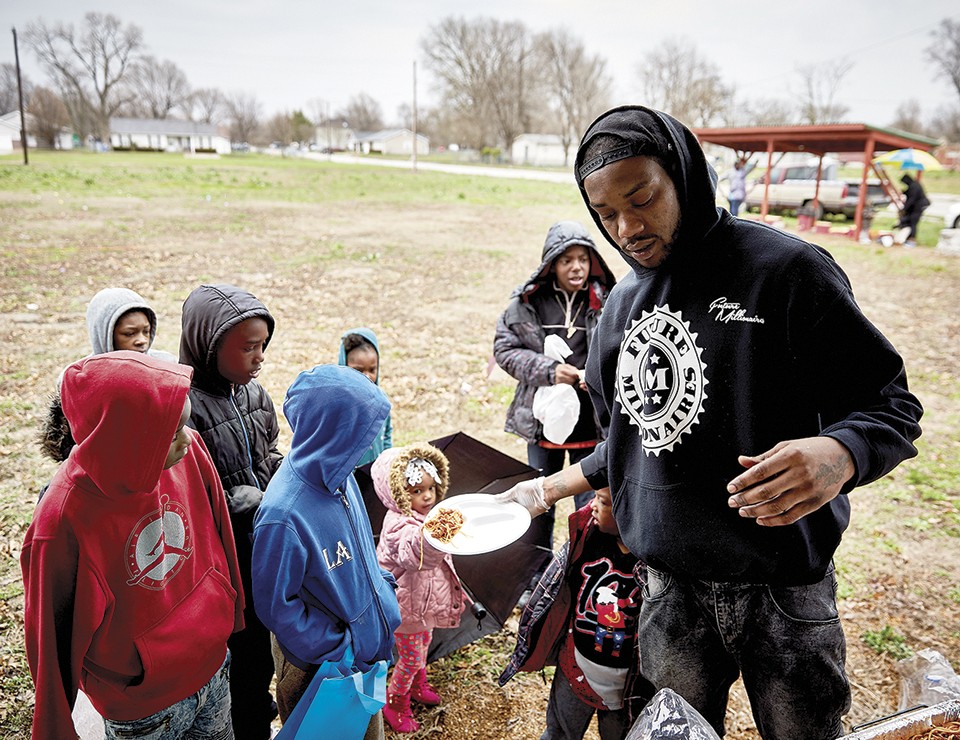 As for what that mantle means, well, here's an example: On the morning before Easter, an overcast Saturday, he and his fellow Millionaires went to a field near the Gompers Homes and organized an Easter egg hunt and cookout for the kids there. (He lists as the group's members a cast of lifelong buddies and cousins — he names them as Zo, NDot, Juju Willis and Chezzo Sanchez.) It's the kind of thing that he feels comfortable doing and ties into his deep roots in East St. Louis proper.

Oberle, the assistant athletic director, has long been Liddell's most vocal booster at SLU. She maintains a long-running group text with Liddell and Thorpe, and says she's not surprised to learn of the Easter egg hunt, nor the fact that Liddell has taken a few years to commit fully to telling his story to a reporter. There's still a quiet edge to the man, no matter the topic.

"Tommie at 18 and 32 are both quiet people, but Tommie's 18-year-old-quiet was pretty sincere," Oberle writes. "He didn't offer much and wasn't sure how to react to my, well, chatty-ask-questions kind of personality. I will say, though, he always had a calm, friendly way about him — his quiet wasn't arrogant, it wasn't standoffish, it was just quiet."

She adds, "He loves his family dearly — he always has. He feels a fierce connection, loyalty and belief in the community he grew up in; you felt that from early on meeting him. He is still and has always been good with kids — he is at his best when he is engaging young people. I enjoy seeing him with his own kids — a daughter and son — as his love for them is clear. I also hear him talk to them on the phone, ending the call with 'I love you.' Simple, but so very TL. He sees the good in people and finds good people." 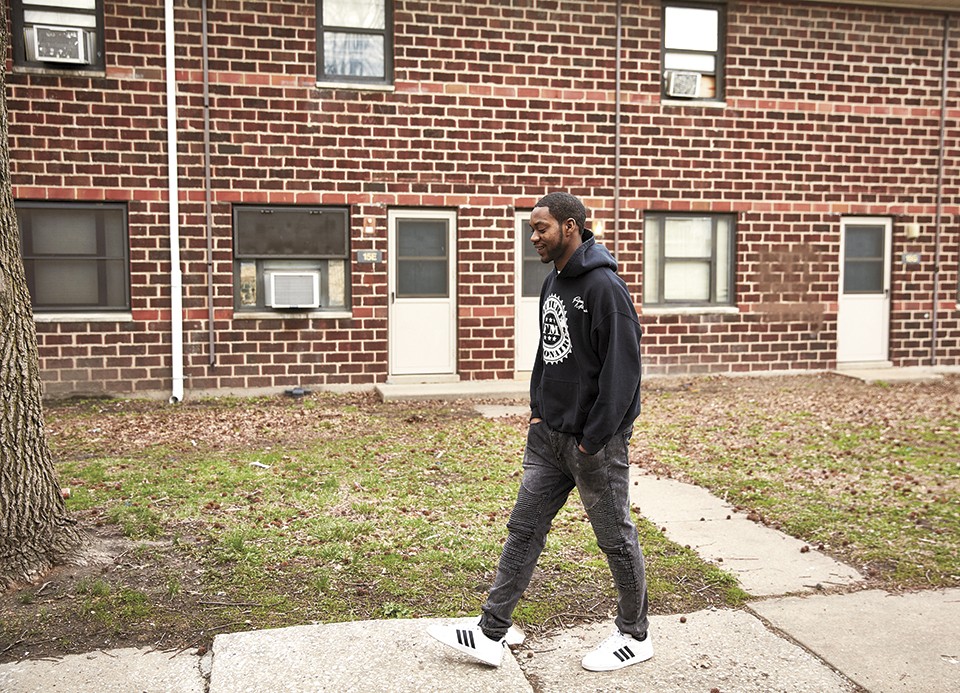 When players leave an institution, their relationship with its supporters can get complicated.

In July 2013, a music video of Liddell's, "For My People," was cross-posted from YouTube to the local Billikens bulletin board, billikens.com. "I made it through 37 seconds of the video," one respondent posted. Another: "It isn't my music taste. I gave him a web hit and cheered him on as a season ticket holder for those 4 years. I think that is sufficient, thanks very much." Another, even more pithy: "Nothing good to say ..."

Liddell doesn't mind any of that. He's not making the music for those folks, anyway. And when he's been around Billiken fans, they've been cool. At least to his face.

"After all these years and people still remember me," he says, now back on campus for various study sessions, although his first class, and the one currently underway, takes place online. "That people actually remember me from what seems like a long time ago, so I definitely appreciate them. You never know when you'll run into a SLU fan, or season ticket holder."

When coaches leave an institution, the ripples in their wake can affect many lives.

After being forced out at SLU, Soderberg had an extended run at crosstown Lindenwood, taking that program to fairly high highs as its head coach; now he's an assistant coach at one of the nation's top schools, Virginia. But with an "awkward" departure, he's been apart from his former wards.

Told that Liddell had good words about him, Soderberg says, "Quite frankly, I feel humbled. I just finished my 33rd year as a collegiate coach, and I'm not always proud of the things I said in the heat of battle. I wish that I could gather all of my former players together and tell them how much that I love them and care for them. It means a lot to me that he thinks well of me. I'll cherish that."

Among the specifics that Liddell recalls: being sat in a chair under the basket, his left-handed shot being retooled by this unorthodox positioning and tons of repetition.

"My mechanics were all wrong," Liddell says. "I had the IQ of the game, but learning how to play the game? From the first day, he sat down with me and we reconstructed my jump shot, sitting in the chair and shooting one-handed shots. That's how my three-point percentage went up so much."

Soderberg laughs when told this. "I just was telling that story yesterday," he exclaims. "We have a left-handed shooter that needs work on his shot and we were talking about that exact drill."

For coaches, there's always another left-handed shooter, a new, improved, younger version of the last one. Another Tommie, no matter the name.

When on campus, those players are supported by academic staffers, with unofficial mentors there to help guide them through to degree completion. But when players leave an institution without a degree, there are often a few who remain invested, ready to help them finish their program.

For Liddell, Oberle has been the key. She says she promised him upon his departure that he would get his degree from SLU. "I told him when he was ready, we would be here for him. And that I would personally make sure that he got the support he needed," she recalls. "I told him I wouldn't bother him or bug him (which I had done lots of while he was at SLU) but that I would trust he would know when to re-engage."

When Liddell reached out by email even after his departure, she remembers feeling so happy to hear from him — and certain it was a sign that the university "would eventually get him back to school."

Two previous attempts, however, came up short. "Both times I underestimated the difficulty of transportation — as TL was relying on public transport both times — and of jobs without regular schedules — also an issue both times," she says. "Realistically, I think both times were also a little early for him to be able to work through those barriers."

At one critical point, with Liddell being inducted into the school's sports hall of fame, something seemed to click. By all accounts his acceptance speech was a winner, a heartfelt one that touched on all aspects of his life and suggested that school was very much back in his mind.

And when former Mizzou standout Corey Tate joined the SLU coaching staff, Oberle again saw him attending basketball games. "I think he is also in a good place in life — able to look forward and see what else he might want for his future. Getting his degree can open up opportunities." This spring, Liddell started that first class, American Literary Traditions: Literature of St. Louis, with the textbook Seeking St. Louis: Voices From a River City, 1670-2000.

In many respects, Liddell's story has all the elements that Hoop Dreams helped to make into tropes of sports storytelling for urban athletes: the street games growing up in a tough neighborhood and the lingering connection to that place. The schooling in a district that couldn't always provide books for all the students in a classroom. The cultural challenges of moving into a collegiate setting. The coaching changes. The injuries derailing a pro career. The settling into challenging vocations and avocations. It's all there in this Tommie Liddell story, all these touchstones, plus a coming chapter which could/should/will involve that SLU degree.

"I actually think that this came from my kids," Liddell says, "so that they can look at me and say they want to go to college, get a degree. Obviously, everybody wants their kids to further their education and get a better job in the world. And I know when I work at my job, I work pretty hard. I think just getting the degree will help me; with a degree and maybe a better job, I'll obviously have more time for family, instead of working graveyard shifts. But it takes a lot of work to finish. I just wish I would've realized it earlier and gotten it out of the way."

And when he does, Thorpe — now a half-lifetime away from watching a teenaged Liddell hooping in southwestern Illinois high school gyms — plans to be at the ceremony.

"I made a promise to him," Thorpe says of Liddell's graduation. "The day you finish, no matter where I am, I will be there."