The differences between St. Louis and Highland, Illinois, are obvious. About 40 minutes east of St. Louis, Highland sprawls north-south between I-70 and Highway 40, with mom-and-pop businesses dotting the two-lane route that runs alongside fields of corn and soybeans. It's charming, but it's quite a contrast to St. Louis' Soulard neighborhood, where cafes, shops, historic homes and bars crowd together in a walkable district known for the Midwest's best Mardi Gras celebration.

Jamie Hill has spent time in both, but she has no interest in putting down roots in either.

"Some people like being in their house, and that's fine," Hill says. "My whole thing is, I want to explore and get out."

That need to "get out" is why Hill heads to a Highland auto body shop every day and tinkers on the 1984 GMC school bus that she's converting into her new mobile home. A 27-year-old bartender who grew up in Silex, Missouri, Hill had lived in a Soulard apartment for several years, but grew tired of paying high rent and limiting her travel time to days off work. Taking monthly weekend road trips with her beagle Lucy to Phoenix, New Orleans and parts of Arkansas, she realized that she needed to make a big change if she was to be truly happy.

"I started getting sad about coming home!" she laughs. "I wanted to be out permanently and just go — to have the freedom to go and live. I knew I wanted to get out of St. Louis, but I didn't know where I wanted to go."

After deciding two and a half years ago that owning a bus was the answer to her dreams, Hill joined a number of social media groups about bus living and began researching options that would work for her and Lucy. Not long after that, she found it: a short bus in decent condition had just been posted to Craigslist, and it was just $2,000.

"I think I looked at it three times and kept thinking, 'Man, this is a really big deal. What am I going to do with it after this?'" Hill says. "Finally the dude was like, 'Are you gonna buy it? Or are you just going to keep bothering me and looking at it?'"

Thus, Hill became the owner of Wanda the bus, named for both a character on The Fairly Odd Parents and the daughter of national park advocate John Muir. But unlike John and Jayme Serbell's conversion van, Hill's 25-foot bus — a mid-sized model that those in the know dub a "shorty" — was already on its way to livability when Hill bought it; the seller had ripped out the seats, installed laminate wood floors and put in a new motor, planning to try nomad life himself.

"He wanted to take it to Sturgis [South Dakota], and I asked, 'Well, why aren't you taking it now?'" Hill remembers. "And he said, 'I invited like seventeen people and it's not big enough!'"

So Hill drove Wanda to the home of her boyfriend's pal, where she and her mechanic brother worked on it, changing the motor to one more suitable for frequent shifts in elevation and building the cabinets and fold-out bed frame. She took advice from her school bus community friends — who call themselves Skoolies — and researched solar panels, lighting and even a dry-flush toilet, which runs on its own battery and vacuum-seals waste until it can be taken to a proper receptacle. She regularly shares her work on her blog, Trips With Wanda Jane.

And that's when things went sour. Hill says that her boyfriend and his friend got into a heated argument — and the former pal took things out on poor Wanda. 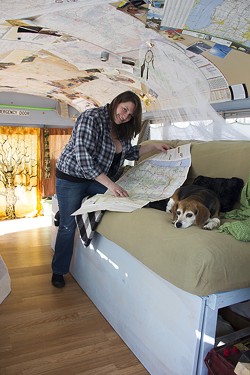 "I came out one day and the starter was off, the battery was out, the tires were flat. He put metal shavings down in the block. Just a horrible human being!" Hill says. She had the bus towed to her brother's house in Wright City, Missouri, and made the best of the situation by adding a fuel-injection system. Once they improved what they could, Hill drove Wanda to a trusted auto shop in Highland, where she and mechanic friends have been slowly working on it since.

Hill and Lucy currently live with her boyfriend near Highland, which makes it easy to visit Wanda every day and prepare her for the road. After putting in about $12,000 worth of bus improvements, she's learned more about wiring for electrical systems and maintaining her new engine and feels ready to take care of things on her own once she and her pooch hit the highway.

"You see so many people building buses and vans, and they have a lot of skill to do it," Hill says. "I want to be the person who doesn't have any skills but knows that it's OK. Like, it's cool, everyone can do this if they wanted."

Hill's biggest desire: to visit every national park in the United States. She plans to start traveling as early as next month, hoping to work-camp in state parks and private campgrounds in the northern part of the country for several months and then do the same in the south once the weather cools. She may pick up bartending shifts in towns along the way for extra cash. But she doesn't want to return to a traditional job or a traditional life.

"It gets into you and you're like, 'I'm building a house! A whole house!' And I don't know if I ever want to live in four walls again," Hill says. "I always tell my mom this is my starter bus and I think eventually I might get a bigger one."

"I kind of just want to live unconventionally forever. Maybe I'll buy a piece of land with a porch that I can drive up to, you know?"