Showing off their new, hand-built kitchen, John and Jayme Serbell might be any couple on HGTV's House Hunters, or, perhaps more apt, Tiny House, Big Living. John gestures proudly to the food prep area, pointing out the features they've labored over for months.

"With the height and space available, we don't want to take up too much, so we're using a lot of quarter-inch plywood," he says. "And then with the furniture we're building, we're just trying to use as many small pieces of wood as possible and keep it light."

Jayme elaborates, making the case for wood over a thicker granite or quartz.

Yes, a van, just like Saturday Night Live's Chris Farley talked about in his old "I live in a van down by the river" sketch. But unlike Farley's comedic situation, there's nothing pathetic about this dwelling plan.

The Serbells are moving into the vehicle by choice. They actually own a home in Affton, but they've engaged in a year-long project to transform an old conversion van into a fully functional living space, clearing out unnecessary seats and adding water lines, solar panels and a bed.

With their newfound mobility, they're planning to travel from town to town across the country, stopping on a whim for a day here, a few weeks there. It's On the Road, only with in-suite USB ports and canine companions.

For decades, Americans have felt the siren call of the highway, especially during the free-spirited 1960s. And with today's skyrocketing rents and mortgages, the spirit of freedom that comes with mobile living is gaining new fans, who connect through social media, dedicated print publications and even exhibits like the Missouri History Museum's "Route 66: Main Street Through St. Louis."

Read on for three stories about St. Louis-area folks who are trading open floor plans and tall ceilings for decked-out wheeled homes roughly the size of a walk-in closet.

For John and Jayme Serbell, the typical 9-to-5 existence was like a skin that just didn't fit.

Jayme, 26, juggled several jobs at once, from waitressing to working with nonprofits. John, 31, who has a degree in film, worked at a financial services firm that paid the bills but didn't offer any creativity. Still, the couple bought a three-story, two-bedroom house in Affton and settled into domestic life.

"We felt like we were genuinely successful," John says. "Even if we hated our jobs, it was like, 'We own a house, we're killin' it. Look at how good we are at being adults!'"

Their lone bright spot was their yearly vacation and sick days, which the couple used to explore southeast Asia, Ireland and other areas around the globe. Soon, though, John and Jayme started questioning if it was all worth it. Owning a house meant accumulating stuff — more furniture, art, clothes, books and knickknacks than they'd ever need, just to make all of their rooms look lived-in. Frustrated with their jobs, consumed by wanderlust, the Serbells started searching for a way to escape it all.

As they began thinking ahead to one last extravaganza before having kids — perhaps backpacking across Europe — they looked to their other family members, dogs Crow and Nymeria.

"We thought, 'Well, we don't wanna leave them, we want to take them with us," Jayme says. "So let's check out our own country!"

But what they had imagined to be perhaps a year-long road trip with Airbnb stops or visits to friends' homes soon started looking more and more like it could become a permanent situation. John and Jayme began researching small SUVs for their trek, renting a hatchback as a test and immediately returning it because it was too small for their little family and the full freedom that they craved. That's when a friend suggested that the couple check out the hashtags #HomeIsWhereYouParkIt and #VanLifeDiaries on social media — a suggestion that would change their lives forever.

"We had both kind of talked about it before, but I always shot it down," Jayme says. "It was always the typical things you tell yourself whenever you want to make a life-changing decision, whether it's quitting smoking or whatever. It's the thought process of, 'Well, I can't because of this or this.'

"I'll never forget the exact moment we went from 'Let's get an SUV' to 'Let's get a van,'" she continues. "John was working from home and I was messing around on Instagram, reading all these blogs. Very quietly I asked, 'What if we did buy a van?' We just started talking about it, and literally an hour later, we were on Craigslist looking at vans." 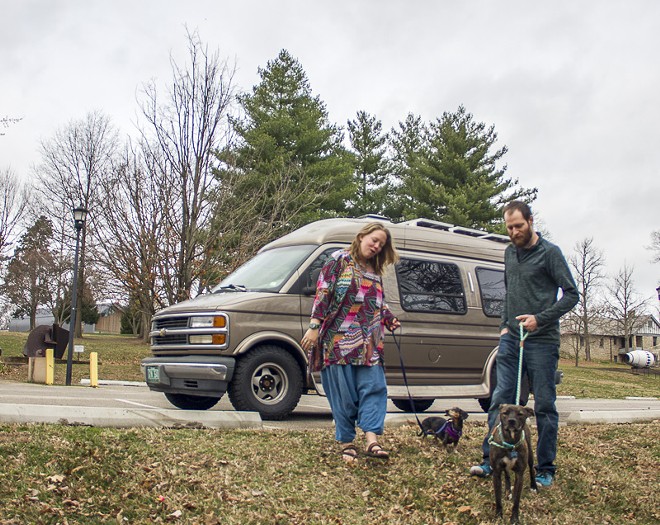 The couple bought a seventeen-foot 1996 Chevy Express conversion van for $1,500 and immediately began working to make it their permanent residence, gutting it of its seats and wheelchair lift and adding new amenities. With advice from the robust van-life community and YouTube videos, they built a sink with cabinets that house a water tank, mini stovetop and small refrigerator. When not in use, their countertop becomes part of the foundation for their bed, which pulls out from its bench position in the back and turns into a full-sized sleep space. Mini LED lights are recessed into the curved cedar ceiling, and the couple added electrical outlets, USB ports and wifi capabilities powered by the solar panels on the van's roof. Out of necessity, every inch of the vehicle is used, creating storage for clothes, tools and even musical instruments out of tight nooks.

All the couple's efforts are documented on their website, gnomadhome.com.

"That's another great thing about the van life community and Instagram and YouTube — everyone's got videos or pictures of what they're doing, so you can get ideas from other people," John says.

"It's fun, too. We both really like puzzles and figuring shit out, and that's all it is," Jayme adds.

Meanwhile, the Serbells began shedding their old life by selling off all of the stuff they'd accumulated so they can rent out their house while they travel. John's 1,500 books. Jayme's art. Furniture. Linens. The TV. It all had to go, mostly through Facebook and Craigslist posts and weekly yard sales. They watched a sectional sofa — one of the first big purchases they made together — get carried out the door. A friend bought the dining room table John had built. Someone took the car in which John had gotten his driving permit years ago. That one, he admits, left him crying on the lawn.

"I think that's the barrier that might stop other people from doing something like this — you get locked into a lifestyle," John says. "It's kind of like in Fight Club. Your things end up owning you instead of you owning the things. It was surprising how much work it was to extricate ourselves from all that."

Now, a year and about $10,000 worth of van-modding materials later, the Serbells are ready for adventure. With a renter already in their own Affton house, the couple and their dogs have been crashing at John's parents' home in Crestwood for a few weeks, putting final touches on the pull-out bed, sealing all cracks and seams with insulation and painting the inside of their new domicile.

They've quit their jobs and plan to sustain themselves through online freelance writing, guitar lessons and graphic design, along with the money that their house rental pulls in. John and Jayme finally will trek west this month, anxious to spend time away from the city lights, just playing their ukulele and cajon drum under the starry sky while Crow and Nymeria explore that evening's camp.

"The Facebook friends and people we went to high school with were like, 'Yeah, sure, they're gonna travel in a van,'" John laughs. "But then we start posting photos and now they're like, 'Holy shit! They're really doing this!'"