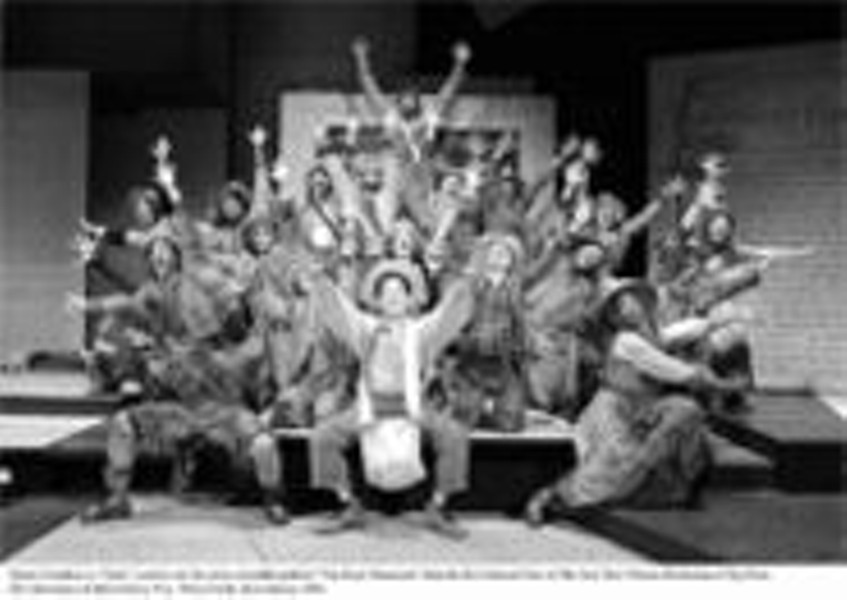 Early in Big River, Huckleberry Finn stands alone on the Fox Theatre stage and quietly sings, "I have lived in the darkness for so long/I am waitin' for the light to shine." That wait is over. This acclaimed Deaf West Theatre staging of the twenty-year-old Broadway musical is a veritable beacon that shines the light of understanding through entertainment. It is an evening of event-theater that should not be missed and that, once seen, will not be forgotten.

Wherever Big River plays, some audience members have to be dragged to their seats kicking and screaming, because -- let's face it -- the notion of a show featuring hearing-impaired actors is not what most of us have been conditioned to expect from theater, least of all in a musical. Yet those same reluctant viewers exit the auditorium exhilarated and humbled.

To be precise here, Huck Finn (who is winningly portrayed by a deaf actor named Garrett Matthew Zuercher) does not literally sing the above-referenced song; he signs the song. The lyrics are sung by Adam Monley, who -- in addition to being Huck's voice -- also portrays the show's narrator, novelist Mark Twain. When he's not being Twain, Monley stands off to the side, mouthing Huck's dialogue and singing his songs. In a quietly bravura performance, Monley is the quiet generator who keeps the evening's current flowing.

The Adventures of Huckleberry Finn, the 1885 novel about Huck's attempts to help Jim, an escaped slave, raft his way out of pre-Civil War Missouri to freedom, has always seemed an unlikely candidate for Broadway. Not only is the plot picaresque, but the book's racial epithets still stir controversy. But when Big River premiered in 1985 in a season that was notably light on musicals, the show received an immodest amount of acclaim and ran for more than two years. After that production closed, the musical did not enter the canon of frequent revivals but was instead relegated to the theatrical backwater. (The Muny, for instance, has only staged it once, in 1987.) Then four years ago Deaf West Theatre, a small California company whose productions are presented in American Sign Language, mounted the musical in a 99-seat house in North Hollywood. The cast of deaf and hearing actors found depths that elevated a good-enough musical into something unique.

For instance, in the original production, songs about the mighty Mississippi ("Muddy Water," "River in the Rain") made the strongest impact. Here "Worlds Apart," which Huck and Jim sing early in Act Two, becomes the bona fide showstopper. When a hearing actor and a deaf actor come together to sing and sign lines like "Just like the earth/Just like the sun/Two worlds together are better than one," old lyrics assume a new resonance that sends chills down the spine.

Audience reaction to the initial Deaf West staging was so overwhelming that the following year the production transferred to the prestigious Mark Taper Forum in downtown Los Angeles. From there it moved to Broadway for a season and now is on the road.

The cast is both delightful and astonishing. In addition to Monley and Zuercher, as the runaway slave Jim, David Aron Damane possesses one of those ground-shaking baritones that allows one to imagine how it must have felt back when the New Madrid earthquake struck the Midwest and sent the Mississippi River flowing north. The ensemble also includes Phyllis Frelich, the pioneering deaf actress who in 1980 won a Tony Award for her performance in Children of a Lesser God.

At first glance, the scenic design by Ray Klausen seems so simple -- just three or four unit pieces in which the book and its pages veritably open up to embrace the performers. But as the evening proceeds, those unit pieces harbor as many appendages as a Swiss army knife. The set proves to be as devilishly clever as its source material.

Four years after he published Huckleberry Finn, Samuel Clemens described his saga of racial conflict and reconciliation as "the stateliest poem of modern times." It took more than a century, but finally a stage production has penetrated to the soul of the novel to reveal what its author knew was there all along. Big River is stage poetry of the highest order.