MABEL SUEN In the "Soulard Primer," hickory and mulberry-smoked prime rib is front and center -- and delicious.

The sign above the Wood Shack's front door tells you all you need to know about the place: "It doesn't get better than this."

What, in fact, could be better than the "Soulard Primer," a prime-rib sandwich that puts to shame every roast-beef sandwich that came before it? Hunks of inch-thick prime rib, kissed with hickory and mulberry-wood smoke and so tender you could butter your bread with them, are cooked to a quintessential, well-rested medium-rare. Grillers at the city's top-dollar steakhouses should take note of such perfectly cooked beef.

Had I been presented with a platter of the Wood Shack's prime rib at one of these swanky, white-tablecloth establishments, I wouldn't have batted an eye. Yet I was seated at a rustic wooden picnic table looking out onto one of Soulard's most charming, tree-lined streets, devouring it at a casual sandwich shop. And it isn't just the meat that makes the "Soulard Primer" a masterpiece. The prime rib is nestled into a warm French roll that balances a pillow-soft interior with a crisp, flaky crust. On top of the meat, bone-marrow aioli and bleu-cheese cream combine for a rich, slightly funky sauce. Charred onions underscore the bleu cheese's earthiness and peppery arugula brightens the rich flavors. And somehow it gets even better than this: In place of the watery au jus that often accompanies roast-beef sandwiches, the "Soulard Primer" comes with a large ramekin of thick, savory gravy made from meat drippings that's as thick as beef stew. I swear I heard angels singing.

If a sandwich shop is supposed to be a humble endeavor, Chris Delgado never got the memo. Instead, he's imbued his year-and-a-half-old quick-service restaurant with the sort of swagger typically reserved for more upscale establishments.

That should come as no surprise in light of his résumé. A veteran chef who counts Shiitake, the St. Louis Club and One 19 North as former employers, Delgado has spent his entire restaurant career in fine dining. Around 2016, he started to feel like he was finished with that style of service and wanted to strike out on his own with a more casual concept.

Delgado had begun experimenting with smoking meat as a way to assuage his homesickness. A native of southern Arizona, he grew up in a culture that used traditional Mexican smoking techniques and fell in love with cooking as he watched his family prepare meals for special occasions. When he moved to St. Louis around fifteen years ago, he left that heritage behind, but it remained a part of him, even as he went on to cook vastly different styles of food.

Delgado saw the local barbecue scene exploding, but he resisted that direction, even as he saw smoking as the key element of what he wanted to do. Instead, he settled on sandwiches as the vehicle to show off his skills, seeing them as both less limiting than traditional barbecue and a way to distinguish himself from the crowded smokehouse field.

As he was scouting for a location, Delgado's wife introduced him to Patrick McGinnis, a chef who owned the Soulard building that used to house his prepared-foods shop, Spring Center Gourmet. The pair clicked, and within a few months, they converted the space into the Wood Shack. (McGinnis has since moved to Florida and amicably turned over his portion of the partnership to Delgado and his wife, who are now the Wood Shack's sole owners.)

Delgado may be responsible for the Wood Shack's menu, but he credits his wife for the restaurant's inviting aesthetic. The interior is tiny, with room for one six-seater communal table and a wall ledge with stools. Exposed brick, corrugated metal and mismatched wooden boards line the walls, which serve as a rustic backdrop for funky artwork. The restaurant's unofficial mascot is a stuffed wild turkey that hangs from the ceiling over the communal table. It's a cozy space, but the best seats in the house are at the bright-purple picnic tables on the leafy patio. Sitting at one under twinkling lights, a light breeze blowing as you look out onto tree-lined 10th Street, is one of St. Louis' most underrated dining pleasures. 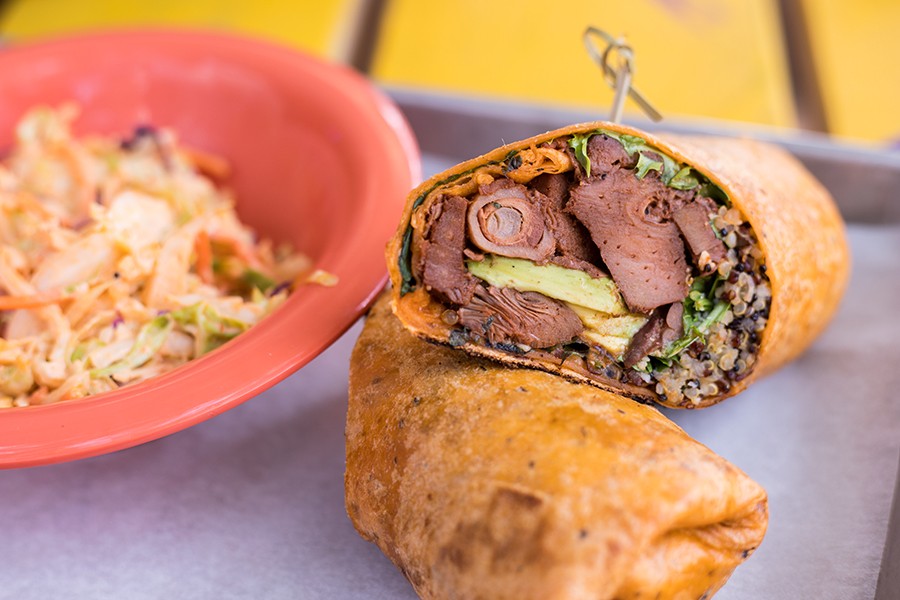 But the real pleasure at the Wood Shack is its food. Though the "Soulard Primer" may be my personal favorite, its excellence is no outlier. The "Three Cheesy Pigs" is a pork-lover's dream, pairing peppery, thick-sliced bacon with tender pulled pork and cherry-and-hickory smoked ham that balances the barbecued pork trifecta of sweet, salt and smoke. I would have been happy had Delgado slapped the ham on white bread and called it a day, but instead, he piles it with the bacon and pulled pork onto a French baguette with luscious comte cheese, pickled okra and pungent Champagne mustard. The accompaniments allow the pork to shine, but give it a bright accent.

The smoked pork butt gets solo billing on the "Mule Kick," a love song to Delgado's Arizona. Creamy "Baja" slaw adds a backbeat of heat to the juicy pork that is stuffed into a sundried tomato wrap with salty cotija cheese. It's a solid offering that showcases Delgado's smoking prowess.

If traditional chicken salad is the demure lunchtime fare of country clubs, the Wood Shack's "Voodoo Chicken Salad" is made for raucous after-hours staff parties. Red-hot marinated chicken is tossed in mayonnaise; it makes the mixture creamy but does not mitigate the heat. Pickled onion and charred onion dress this fiery filling, which is served on griddled wheat bread that soaks up the spicy mayo like a sponge. 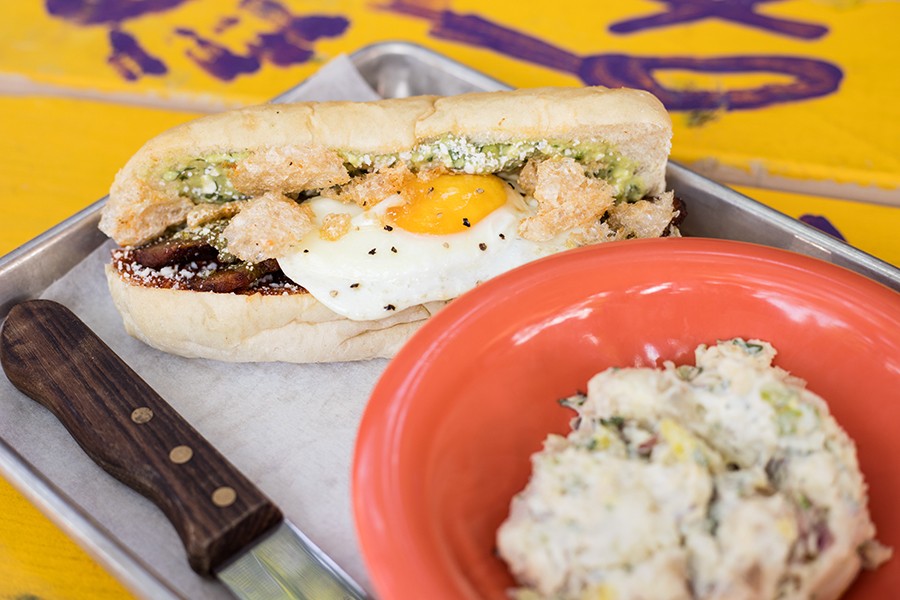 I loved the flavors on the "Burley Wich," in which cumin-forward adobo-spiced pork belly is slathered with piquant tomatillo guacamole and garnished with crumbled pork rinds. However, the pork belly was tough and not easy to chew. I was almost able to overlook that, though, thanks to the accompanying over-easy egg, which gilds the meat with its silken yolk.

The Wood Shack's pastrami is briny, tender and infused with a whisper of clove. It's good, but lacking the black-pepper bark I love in a good pastrami. However, the pungent cream-cheese mustard sauce gave enough of a kick I almost didn't miss it.

Had I been missing a peppery kick on the pastrami, I would have found it on the "Ragin' Cajun." Maple-pecan-smoked turkey is dressed with pink-peppercorn dressing that has a sneaking, back-of-the-palate heat that is more suggestive than overt. Creamy, smashed avocado and bourbon-bacon jam form a delectable paste — a combination that takes the idea of a turkey-bacon club and turns it up to eleven.

Sides at the Wood Shack include a creamy house slaw that is amped up with chile heat and a potato salad that would be standard picnic fare were it not for the smoked potatoes. The pleasant, earthy flavor given to these spuds pairs well with the smoked meats. The standout, however, is the mac and cheese, a velvety, cheesy concoction of corkscrew noodles and three-cheese sauce, its richness cut with a liberal amount of crushed black peppercorns.

Delgado hints that the Wood Shack might be a precursor for a more ambitious, Mexican-inspired concept, but he felt that St. Louis restaurantgoers first needed an introduction to his style of cooking, a taste of what he can do when he's free to cook on his own terms. Build trust, he says, then bring folks along for the ride as he shows off his way around the fire, just like his mom taught him many years ago. It's a good plan, but with sandwiches this wonderful, it's hard to imagine how he could top himself. The Wood Shack is as good as it gets.