GRAEME HUNTER, COURTESY OF SONY PICTURES CLASSICS Genuine rancor is brewing in the marriage of Joe (Jonathan Pryce) and Joan (Glenn Close), and not even a Nobel Prize can stop it.

If you're a regular visitor to your local theatre specializing in "independent" films — they can't really call them "arthouses" anymore — you've probably noticed a trend: familiar actors and actresses showing hints of the charm that made them famous forty or fifty years ago even as they face old age. They feed on a kind of nostalgia, showing someone with movie-star appeal facing the uncertainties of 21st-century life even while assuring us that their (and our) free-spirited past wasn't a lost cause.

These films tend to fall into two categories: If it's a comedy, the aging performers show they haven't lost their rebellious joie de vivre by digging out that old LP of Days of Future Passed or tackling some new endeavor, like running a hotel. (Bonus points for learning how to make friends with their Asian neighbors.) If it's a drama, we discover that the characters, having survived the 1960s or '70s, have in fact been harboring a secret, some grain of disappointment they'd buried as they entered adulthood but that suddenly leaps up through the cracks now that they face retirement or physical decline.

The Wife, the latest film to rest on the appeal of familiar faces fading gracefully, follows the second path. Set in 1992 to avoid the clutter of smartphones and online gossip, it begins with graying novelist Joe Castleman (Jonathan Pryce) being notified — not entirely to his surprise — that he's won the Nobel Prize for literature. Despite the good news, his wife Joan (Glenn Close) almost immediately begins to show signs of irritation, setting the bitter tone that engulfs the rest of the film. Joan fumes silently, while their son David, an aspiring author angling for his father's attention, sulks and provokes arguments. Joe, in a permanent dither, tries to navigate the tantrums and rebukes without much luck. This is a film where almost every character is out of sorts for no clear reason.

In almost no time, Castleman, his silently fuming wife and his petulant son are in Stockholm, where the author must balance the pageantry of the Nobel ceremony with the increasingly churlish mood of his entourage. Christian Slater turns up as a would-be biographer, first fawning, then "trolling for nuggets of bitterness," deliberately sowing the resentments of both wife and son and throwing Castleman's history of infidelity in Joan's face. But rather than comply with Slater's questioning, Joan turns to the cinematic equivalent of conflict avoidance: the flashback.

In brief installments, The Wife leaps back to the Castlemans' early days, when Joe was a married professor and Joan (played in her younger incarnation by Close's daughter, Annie Starke) a student. A request to babysit soon turns into one of those teacher-student affairs that no fictional academic can ever resist. Young Joan was also a promising writer, one whose ambitions were set aside after a visiting author (Elizabeth McGovern) warns her that women are automatically excluded from what Terry Southern used to call "the Quality Lit game." "Don't ever think that you can get their attention," McGovern warns (bitterly, of course).

With successful writers, sensationalist hack writers, would-be writers and frustrated writers filling up every scene, you would expect The Wife to have something to say about literary life, but the film offers no more than a contrived view of what writers do or how they work. We see little evidence of the writing process; Castleman and his son, in separate scenes, simply show up with complete manuscripts in hand, waiting for praise and overreacting at the slightest criticism. Books exist only to be published or to establish reputations; the content is evidently irrelevant. 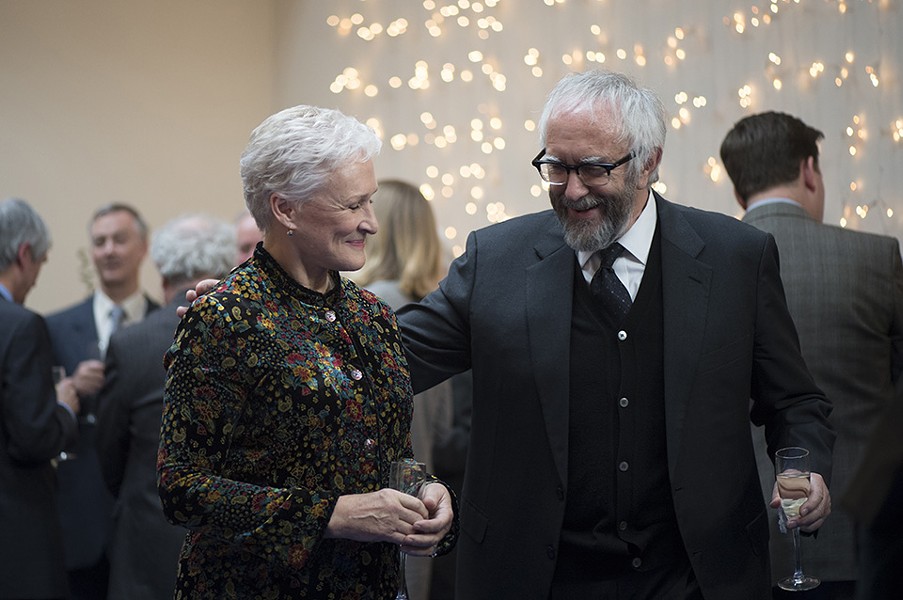 There is, as it happens, a big literary mystery to be solved in The Wife, and that is also the film's biggest problem dramatically. At the risk of triggering the "spoiler alert" brigade, I'll keep this as vague as possible: one or more characters have long-held secrets, which are eventually revealed and which are intended, I suspect, to change the way we see them. If this were a mystery, these secrets would provide the climactic moment to surprise or unsettle the viewer, but The Wife is a character study, not a puzzle. The revelations are supposed to tell us something about the figures we've been watching, but they instead simply confuse. Because there's no emotional foundation, and nothing at stake, the twists and contrivances have no weight. They are a gimmick, so dramatically out of place that the filmmakers have no choice but to rush to an abrupt and fairly labored ending.

No matter how much we enjoy watching Pryce and Close, both excellent performers, they can't create personalities or compensate for a slim, barely coherent story. At one point in the film, someone recites the line (attributed to various authors) that "a book is never finished, only abandoned." The filmmakers appear to have followed that adage too literally.