In The Revenant and the Hateful Eight, the Western Gets Grim and Grizzly

For nearly a century the Western was seen as a celebration of American progress, of the taming of the wilderness, the virgin land made into a civilization. Although cracks in that reverent image had started to appear almost as soon as the genre aged from a contemporary to an historical one (as when the outlaw and the fallen woman in John Ford's Stagecoach are shunned by society but saved "from the blessings of civilization"). By the 1960s, Western heroes were more likely to be bounty hunters or assassins than small-town sheriffs or settlers, and their motivation was more often revenge or profit than building a new land. Two new Westerns — coming at a time when the genre is an endangered species — draw on the anti-social themes of the late-twentieth-century Western and push them into darker and more misanthropic territory. Rather than praise our journey into civilization, these films look deep into the wilderness.

There's almost nothing civilized in Alejandro González Iñárritu's The Revenant, which takes place in frozen Montana in 1823. Based on portions of Michael Punke's novel of the same name, which was in turn based on the life of frontiersman Hugh Glass, it recreates a wild, raw world in which everything in sight (or out of it) holds the potential for danger.

Early in The Revenant we see Glass (Leonardo DiCaprio) and his son walk slowly through a stream tracking a deer, one of the few quiet moments in the film's 156 minutes. In the distance a coarse and ragged team of fur trappers who have hired Glass as a guide are busy skinning animals and gathering their hides. Suddenly a hostile band of Arikara Indians attacks and the screen erupts into violence, with arrows and bullets flying in every direction. There's no logic, no identification of one side or the other; there's just a shower of random, inescapable violence, a moving panorama of mayhem. The long takes and fluid camera movements which served to keep the viewer within Michael Keaton's claustrophobic, single-minded world in Iñárritu's Birdman have a very different effect here, creating a sense of unsettling and uncontrollable chaos.

It's also just a prologue, an extravagant hint at the more subtle tensions that propel the rest of the film. After the surviving trappers retreat, Glass is attacked by a bear — a brutal scene that is hard to watch even if you remind yourself that the creature is just a CGI effect. The remainder of the film centers almost entirely on Glass' struggle first to survive, then to take revenge against one of the trappers who leaves him for dead.

The Revenant is such a single-minded film that it's hard to describe in any terms other than its narrative, and DiCaprio, who has little dialogue and not a single chance to flash the boyish charm we've come to expect, carries about 80 percent of it. (Tom Hardy, almost unrecognizable as Glass' chief antagonist and an unrepentant villain, holds his own in a very different kind of performance, the natural opposite of DiCaprio's coolness). It's intimate but also vast, an action film with a strong sense of nature and space. It's rugged yet contemplative, and although Iñárritu indulges himself with a few moments of off-tone ethereality — Glass' visions of his dead wife — they can't dispel the sheer rigorousness of the film. The Revenant has all the makings of a Western (and especially the man-in-the-wilderness subgenre that appeared briefly in the 1970s), but transcends most of its peers with its grueling depiction of struggle and survival. 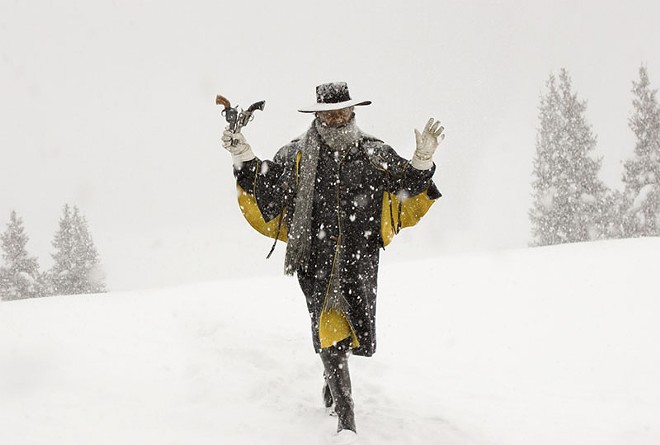 With his most recent films (Kill Bill, Inglorious Basterds and Django Unchained), Quentin Tarantino's work has posed a question: We recognize his love of provocation and his encyclopedic knowledge of exploitation genres — but will he ever grow up? Would he ever challenge himself with a subject that demands more than extravagant violence and the distraction of too-cool-for-the-room, pop-culture name-dropping? More than two decades and seven films after Reservoir Dogs, it's time to toss such questions aside. With The Hateful Eight, Tarantino continues to bend genres, twist narrative conventions, push buttons regarding race and violence, and generally continue to behave like the same badboy/cineaste/provocateur he's always been. The new film will neither win new devotees nor repel old ones: Tarantino is still Tarantino.

Which is not to say that Tarantino isn't stretching himself with this film. The Hateful Eight is in some ways a bigger, more expansive film that he's made before. Shot in Ultra Panavision 70, a widescreen format last used in 1966, it's Tarantino's attempt at reviving a grand style of filmmaking that went out of fashion many decades ago. (As has been widely reported, there are two slightly different versions of the film: one in wide release, and an expanded roadshow edition with an overture and an intermission presented in 70mm on a mere 100 screens nationwide — you can see it locally at the Wehrenberg Ronnies 20).

Set in a snowy wilderness in the 1870s, the eight characters of the title are thrown together in the isolated stagecoach stop Minnie's Haberdashery while a blizzard rages outside. John "the Hangman" Ruth (Kurt Russell) is a bounty hunter transporting Daisy Domergue (Jennifer Jason Leigh) to her execution. Major Marquis Warren (Samuel L. Jackson) shares Ruth's profession and is transporting three corpses for reward. The two rivals are joined by a former Confederate soldier turned lawman as they seek shelter in the lodge, already inhabited by a Confederate general (Bruce Dern), a professional hangman (Tim Roth) and two other less-than-forthcoming figures. Once the full cast is in place, the film becomes partly a kind of Agatha Christie locked-room mystery, partly a discussion of race relations (post-Civil War, but post-Ferguson too), and partly a loopy shaggy-dog story fueled in equal parts by rambling monologues and gore.

Divided into six chapters and shaped by the flashbacks, multiple perspectives and digressions we've come to expect from Tarantino, The Hateful Eight walks such a thin line between artistic license and self-indulgent outrageousness that you spend much of the film asking yourself how far he can go. Is he making a statement about race and history, or does Tarantino just really like using that particular word? Is he turning the tables on the aggressive masculinity of the genre, or simply wallowing in misogyny? (The physical abuse of Ms. Leigh's character is something of a running joke in the first half — or at least that's how a few people in the audience seemed to see it.) There are no simple answers, but Tarantino clearly prefers it this way. His game is not so much ambiguity as it is a kind of choose-your-own-adventure rabbit hole.

Although much of the film has a stagelike simplicity inspired, according to the director, by the television Westerns of the '50s and '60s (Jackson's character shares a name with the producer of Gunsmoke and Rawhide), it also has an epic quality provided not just by Tarantino's usual flamboyance but by the spacious photography of Robert Richardson, and a rich, dark score by the always masterful Ennio Morricone. (Although Tarantino couldn't resist digging into his record collection to supplement Morricone's work with selections from Last House on the Left, The Fastest Guitar Alive and Morricone's own scores for Exorcist II and The Thing.) The production quality may add a touch of grandeur, but the tone of the film is guided solely by Tarantino's sensibility -- which, like it or not, is always surprisingly and playfully inventive. The Hateful Eight is cocky, excessive, vulgar, violent, deliberately anachronistic and incredibly pleased with itself — just what we've come to expect from its cocky, vulgar and (as much as you may hate to admit it) authentically brilliant creator.