The Wee Heavies Bring the Songs of Scotland to St. Louis on Self-Titled Debut 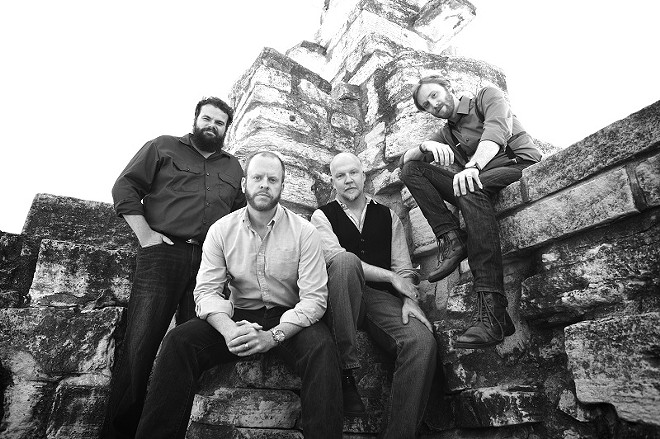 At the end of a round of beers at the Thurman Grill in the Shaw neighborhood, three members of the vocal quartet the Wee Heavies are debating how best to describe their group. Are they a Celtic folk band? A traditional a cappella group? A Scottish singing troupe?

While the Wee Heavies have been performing together since 2013, the group is clearly still working on how to sell itself. The members specialize in Scottish folk songs arranged for four male voices. And though we all might fake our way through "Auld Lang Syne" each December 31, most listeners aren't as well-versed in the songs of the Scottish highlands as they are with the folk tunes of England and Ireland.

The members — Steve Neale, Aaron Schiltz, Peter Merideth and Jay Harkey — first sang together as members of the St. Margaret of Scotland choir. When the parish's music director Peter Hesed arranged a four-part harmony piece for a St. Patrick's Day show, the quartet was formed almost by happenstance. According to Schiltz, the one-off performance awoke his desire to perform again.

"We did it a couple of more times and thought it was fun," says Schiltz. "I didn't have an outlet like that anymore. I was an opera singer when I left college; I kind of walked away from music entirely and got an MBA."

A quickly recorded iPhone demo helped get the group a spot at the 2013 Festival of Nations. The Wee Heavies were awarded twenty minutes on the folk stage — a slight problem, given that the quartet didn't yet have twenty minutes of material. Yet when the initially small crowd listening to them grew to around 150, remembers Schiltz, the quartet was immediately booked to return for the next year's festival.

The group continued to perform at festivals, but the members' pilgrimage to Scotland in 2014 as part of a parish choir sojourn, solidified their attachment to these songs. Neale calls it "a formative experience," and the singers came back with some memories — singing on top of a North Sea ferry during a sleet-storm, trading songs with a local band at a pub in Glasgow — and a raft of new songs for their repertoire.

Many of those songs are contained on the band's self-titled album, which was released last April. On record, the Wee Heavies' approach can be reverent or ribald, depending on the tune. "Heiland Laddie" is tender and sonorous, allowing the men's voices to traipse over the tale of a homesick sailor. "Mary Mack" is more cheeky, its sped-up tempo leaving the singers a bit breathless as they tell the tongue-twisting tale. Whatever the mood of the song, the voices blend warmly and in harmonic accord. There's nary a missed note on the disc, though the effect is, at times, a bit sterile.

Merideth notes the gap between the recordings and live performance in our interview. "We're a different show live," he says. "On CD we sound kind of nerdy."

Neale speaks to that disconnect, arguing that these songs are meant to be performed in front of an audience. "Yeah, we're a cappella and we do Celtic folk music, but it's always a party," he says. "We hit our stride when we figured out we didn't need to be so stiff on stage, and we can just do whatever the fuck we want. So people sing along, they laugh and they yell and we get them screaming at the top of their lungs."

Schiltz, whose background is in opera, appreciates the looseness in the performances and seeing how it translates to the crowd. "In the opera community, if you screw up, you kill yourself," he says with a laugh. "If we screw up, the audience can tell. But if we let them in on the joke, it kind of breaks down the barrier between the audience and us. The reason I was never really drawn to opera was because I didn't want to pretend to be anyone else on stage — I just want to be myself on stage."

That looseness applies to the Wee Heavies' repertoire, which leans heavily on Scottish songs but is flexible enough to incorporate Irish and English folk traditions — as well as some American classic rock.

"At this point, the majority of our songs are Scottish, because that's where we were and we picked up some songs there," says Neale. "But we do a Pogues song, and then we'll throw in 'Seven Bridges Road' by the Eagles, because why not — we like it. So there is crossover."

Even if audiences aren't as well-versed in the music of Scotland, Schiltz finds that the major themes apply pretty easily to their audiences.

"There are only five things that all Celtic folk music is written about: killing people, having sex, getting married, fishing and getting drunk," says Schiltz. "With the exception of killing, we've done everything else. Part of it is that these themes are universal."

Stream tracks from the album below: