The Way We Die Now: Movie violence has never been better — or more reckless 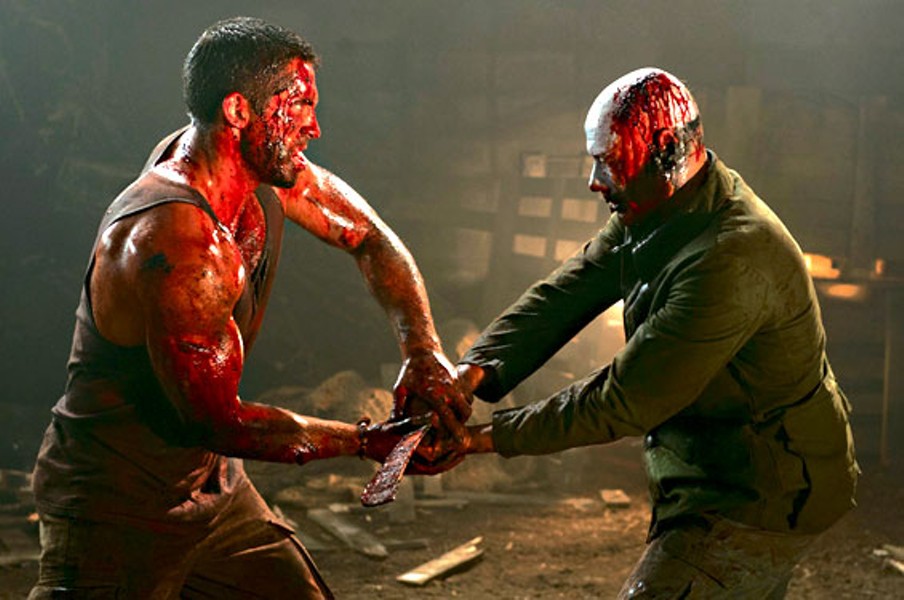 The Way We Die Now: Movie violence has never been better — or more reckless

Part of the renascent body-count action industry, Universal Soldier: Day of Reckoning's mere existence might shock many Americans. "There are four Universal Soldier movies?" those shocked Americans would say. They might also be taken aback by the bracing violence that marks the film from stem to stern: the gangland-style execution of the protagonist's wife and daughter, the naked bodies rent by shotgun blasts, the hacked-off fingers and no-anesthesia lobotomies.

If we accept the aestheticization of violence as all in good fun, then our pictures are entering a fecund action-painting Red Period, in which photo-realistic CG enables all manner of innovations in better dying — like Rick Yune tracing Chinese characters in the air with the arterial spray of his enemies in The Man with the Iron Fists, which also features director/star RZA having his arms lopped off in loving detail.

The cultural barriers are down! The grind house is ascendant! Worrying today about the hashed-over problem of gore for gore's sake, one feels as out of touch as Bosley Crowther, the New York Times critic who was hastened to retirement in 1967 after taking Arthur Penn's Bonnie and Clyde to task for its seriocomic tone ("This blending of farce with brutal killings is as pointless as it is lacking in taste"). Rather than face accusations of hypocrisy or priggishness, better to confess a frank and open exhilaration at the sight of blood. It seems the only end in sight is ongoing one-upmanship leading to inevitable tedium and dead end, perhaps finally driving filmmakers back to psychology and suggestion.

But when a movie-theater shooting in Aurora, Colorado, marked the opening night of Christopher Nolan's The Dark Knight Rises, a brief bout of self-examination was in order. In The Hollywood Reporter, Harvey Weinstein called for an industry-wide colloquium on screen violence while Peter Bogdanovich expressed regret at having made the 1968 film Targets, about a sniper who shoots up drive-ins. It should be noted that Weinstein, whose company is distributing Quentin Tarantino's upcoming Django Unchained, began building his empire with a 1981 video nasty called The Burning, which features a pair of hedge-trimmers performing shockingly realistic dismemberments, analog gore effects courtesy Tom Savini. I wonder how plans for that colloquium are coming along?

It would be a fallacy to claim that the likes of Universal Soldier 4 represent the entire mainstream of screen entertainment — like the horror film, the splatter-actioner has a self-selecting, connoisseur audience and is akin to slapstick in its extravagant "gags" (in both senses of the word) and cartoonish irreverence. But the same apocalyptic wantonness that marks these pictures appears in the most self-serious of blockbusters: See the offhand murder of an entire football team in The Dark Knight Rises, the freeway-long swaths of fatal chaos left in the wake of car chases, or the clichéd image of a character nonchalantly walking away from a massive explosion like he or she has just bowled a strike, without even turning around to watch, epitomizing an increasingly cavalier attitude about destruction.

To some degree, this cognitive shift would appear to be generational, to do with film grammar increasingly borrowing from (and competing with) video games, comic books and animation, which by their nature do not have the same tricky relationship to realism as photographed cinema. Placing the bulldozing new remake of Red Dawn side by side with John Milius's 1984 original, one is struck by the degree to which Milius, often dismissed as a gun-nut jingoist, takes pains to humanize the homesick occupying Commies.

Whenever issue is made of screen violence, the inevitable rejoinder is that violence and the drama are indissolubly linked, a partnership going back to the Jacobean stage, to Sophocles. This point was made by the American director Anthony Mann in a 1967 BBC interview, in which he cites Gloucester's blinding with spurs in King Lear as a precedent to his own art. Acts of violence proliferated in Mann's movies, but it was violence that made you feel exhausted rather than exhilarated; Mann understood hate as something like a fever working its way through the body.

For a long time, I have been haunted by a scene from Mann's 1958 Man of the West, a Gary Cooper vehicle and the last in a series of "psychological" Westerns Mann made in the 1950s. Man of the West's action centerpiece has retired bad hombre Cooper meeting a trio of desperados for a shoot-out in what is — nearly — a ghost town. I say "nearly" because, just before the shooting starts, one of the gunmen, Royal Dano, is surprised by a middle-age Mexican woman, and he fires on and kills her in a panic. In most other movies — certainly the spaghetti Westerns that Tarantino's Django knocks off — this would only be an expedient to set the bullets flying, which they do, but what comes afterward is what makes Mann the American cinema's nonpareil tragedian. Just as Cooper is walking out of town alone, a man who is presumably the dead woman's husband discovers her body, and the fade-out from the scene is accompanied by his plaintive: "¡Mi Juanita! ¡Mi Juanita!" A dark pall lowers over Cooper's already bitter victory — a reminder that the dead woman meant the world to someone.

This awareness of cause and effect, of collateral damage and irreparable loss, is what separates drama from spectacle, Sophocles from the Colosseum. The classic action movie was an arena in which characters projected their moral force into the world through their actions and faced the often messy consequences. Now it's nearer to a literal arena, where the wreckage is quietly swept away between acts.

The cinema is, as the saying goes, a big church, with capacity for a number of vying denominations. It is not the proliferation of the bloody fools that we should regret — for allowing us to laugh at death is a vital function. The problem lies in the by-and-large failure of serious action filmmakers to act as counterbalancing tragedians, the absence of artists who, like Mann, consider the weight of each bullet. Our movies prove over and over that they can be "cool" — but can they can be something more? O, death, where is thy sting?