P​HOTO BY RORY MULVEY. ​COURTESY IFC ​FILM Rob Brydon and Steve Coogan are show-biz friends whose vacations together are work.

The Trip to Spain

The Trip to Spain, the latest installment in this young century's most consistently entertaining series of films (or "franchise," if you insist on sounding like a second-year business student), continues in the simple pattern of its predecessors. British actors/comedians Steve Coogan and Rob Brydon spend a week driving through a country, visiting obscure and expensive restaurants while engaging in (mostly) good-natured comparisons of their respective careers and abilities to impersonate Michael Caine.

The concept is almost ridiculously simple, yet Coogan and Brydon, working with director Michael Winterbottom, have managed to transform this semi-improvised notion into an impressive balance of comedy and human drama. The two men are always a pleasure to watch, but there's a bare honesty under the joking. Even though the films rest on their playful verbal sparring, Coogan and Brydon end up revealing truths about friendship and life between quips.

Although they use their own names, Coogan and Brydon are playing characters who deliberately exaggerate or even distort their real public images. Coogan was a favorite target of the British tabloids when The Trip appeared in 2010, and much of the series plays on his vanity and self-importance. The Welsh-born Brydon, whose greatest achievement (at least as the films have it) is a squeaky-voiced stand-up character called Small Man in a Box, is the more humble and homespun of the pair. He is seemingly as content with his career as Coogan is uneasy about his.

There is slightly more tension between them in the new film, their third, which depicts a friendly but pointed one-upmanship that threatens to go off the rails. The gap between their personalities widens as Coogan, fresh from the global success of 2013's Philomena, becomes slightly paranoid. Even his nightmares are tempered by his vanity. In one, he mistakenly leaps up to accept an Oscar; in another, he's dragged before Grand Inquisitor de Torquemada (or more accurately, Brydon impersonating Marlon Brando in Christopher Columbus: The Discovery) and tries to brag his way out of torture with a story about meeting the Pope. A running source of humor in the film is that everyone is aware of Coogan's egotism, tolerating it and even feeding it in order to deflate it. In one scene, Coogan is coaxed into comparing himself — favorably, of course — to Picasso, only to realize slowly just how ridiculously pompous he sounds. 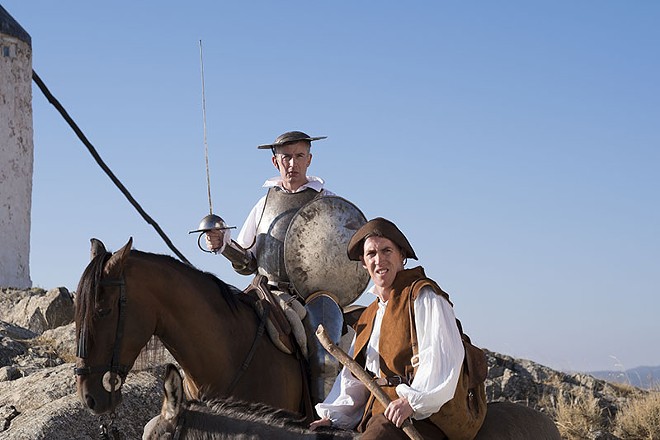 Running through it all, as in the previous entries, is a constant stream of celebrity impressions, a passive-aggressive contest between the two men as well as a shared affirmation of their love of pop culture.

The impressions are more than just showing off; they're nearly the most personal way Coogan and Brydon communicate with each other. They can be endearingly silly, as when Brydon, alone in his room, reads a travel guide in the voice of Roger Moore, but there's also something strangely compulsive at work. In one scene, where Brydon delivers a series of jokes about the history of the Moors, again using the voice of James Bond, he seems unable to stop himself, as if possessed by the spirit of a 007-loving vaudevillian.

Throughout the Trip films, there is an interplay between the comedy of the two men and the complications of their private lives. In The Trip to Spain, those two factors become even more tangled as Coogan grows sulky and increasingly unpredictable. When a young English busker proves knowledgeable about Spanish cuisine, Coogan has a tantrum and bolts. Even the lighter moments have an underlying tension; when Brydon out-does Coogan with an anecdote about David Bowie, I honestly worried that it would be the pop-culture straw to break their relationship.

The Trip to Spain, like its predecessors, was first presented in a six-episode TV version, then condensed into a single film. In some ways, I prefer the leisurely pace of the television presentation, in which the journey and the meals take on an almost ritualistic quality. (One advantage to the shorter version is that viewers are spared some of their lesser imitations: Neither man can do a passable William Shatner and Brydon's Willie Nelson is awful.)

Both versions benefit from the seamlessness of Winterbottom's direction and the cinematography, which captures the natural beauty of the Spanish locations without meandering into a travelogue. The TV series is more casual, while the theatrical film crystallizes the drama of Coogan's eroding psyche and makes the ending, a potentially divisive surprise event, even more startling. After the good company and rambling pace of the first two Trip films, Winterbottom and his cast have given the series a decisive shift — and where this cerebral Hope and Crosby go next is anybody's guess.