Watching my three-year-old's head spin as she tried to take in the full extent of the sweet offerings at the Taco & Ice Cream Joint, I couldn't help but recall Benicio Del Toro and Johnny Depp walking into the Circus Circus casino in Fear and Loathing in Las Vegas. Granted, theirs was a mescaline-induced trip and this was sugar, but the duo's mix of overstimulation and awe can't be far off from what kids experience upon stepping into this temple of sweet excess.

You don't have to be a child to be left dizzy by this carnival of a taqueria and dessert shop. What had been a long-abandoned department store in the heart of Cherokee Street has been turned into a massive, Technicolor restaurant that makes Willy Wonka's chocolate factory look subdued.

An ice cream counter, outfitted in neon pink signage, runs the entire length of a very deep space, overflowing with flavors both traditional and un-: candies, sprinkles, bacon, exotic fruit and anything else you could imagine for toppings. Popsicles with hunks of fresh fruit, waffle cones coated in sugary glaze and a chocolate fountain that seems to run just for the spectacle of it sit behind the glass, along with, on two of my visits, a woman hand-dipping bananas in molten fudge because ... why not? 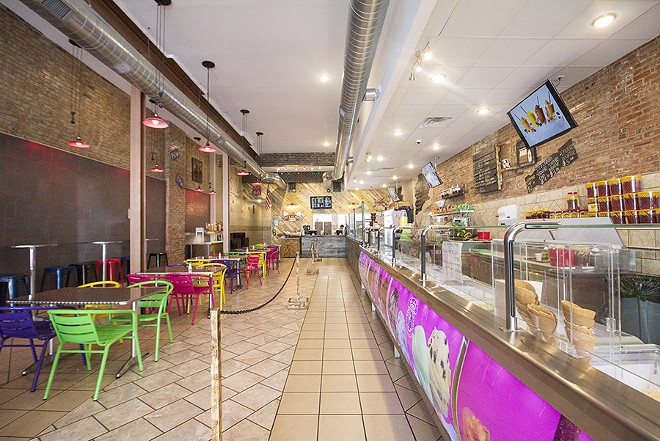 Many of us would be dumbfounded by a scene like this, but for the Rico family, which owns the Taco and Ice Cream Joint, it reminds them of home. After moving to the United States from Mexico when they were in their twenties, Salvador and Judith Rico worked odd jobs in the restaurant business before opening a small supermarket thirteen years ago. Over time, what started as nothing more than a little hallway grew into El Morelia Supermercado, a large grocery store and butcher shop located in Bridgeton.

Around 2010, the family — which also includes son Salvador Jr. and daughter Karen — decided to open a small taco stand inside the market. At first, they served only a few varieties, but as word spread, the Ricos expanded their offerings. Eventually, they put in a full-fledged kitchen to accommodate the demand.

The success of the market's taqueria gave the Ricos the idea to open a restaurant, though they wanted to do more than just savory food. When they longed for the over-the-top sweet shops they enjoyed back in Mexico, they had to drive all the way to Chicago. Why not bring those flavors a little closer to St. Louis? That idea initiated a search for a location, and when they came across the long-abandoned storefront on Cherokee, they knew they had their spot.

Though the dessert line is what strikes you upon entry, the savory menu is every bit as worthy. On any given day, the restaurant has approximately fifteen different taco fillings, all served à la carte and completely undressed. This presentation allows diners to choose their own accoutrements from a salsa bar that offers everything from pickled onions, cilantro and pico de gallo to fiery mango salsas and a piquant cauliflower and onion relish similar to giardiniera. On both the taqueria side and the dessert one, you can pick a base and pile on the toppings to your heart's content.

Use them sparingly, however, lest you cover up the positively succulent meat coming out of this kitchen. Tender carnitas drip with rendered pork fat — nothing but a pinch of salt dares to stand in the way of this porcine bliss. The place may peddle in excess, but it's the purity of flavor and fork-tender texture that makes this offering so pleasurable.

Cochinita pibil is carnitas' luscious cousin. Made with shredded pork thigh, the meat is steeped in citrus and has a slightly richer flavor and texture. As luxurious as this meat is, it seems tough compared to the cabeza, or beef head. "Tender" does not do this meat justice; it's the consistency of meat butter and has a delicate, pot roast flavor. 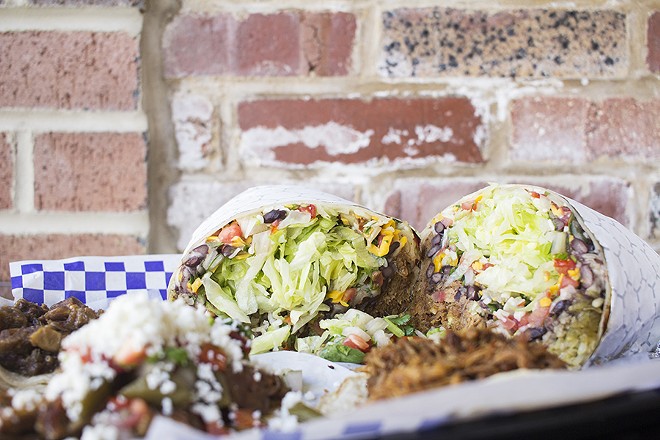 Cecina, or strips of beef, on the other hand, are intentionally chewy. Chile-rubbed and air-dried, the meat is like a Mexican-spiced jerky, a good choice if you are looking for a firmer, more steak-like filling. Other options include a straightforward pineapple and pork al pastor and a rather mild chorizo (this is where the hot sauce from that condiment bar is suggested).

Tacos are not the only way to enjoy these meats. The burritos are monstrous enough that one could easily feed three people. You're allowed to choose up to five toppings to go inside, including pinto or black beans, cilantro or brown rice, guacamole, sour cream, cheese, grilled veggies and salsa. At some point they devolve into an amalgam of indiscriminate flavors, albeit a pleasurable one. Just refrain from ordering one on the first date; it's impossible to keep from making a mess.

Though the Taco & Ice Cream Joint closes by 10 p.m. on weekends, its "Cherokee Street Nachos" seem designed to appeal to the area's post-bar crowd. Like the burrito, there is a lot going on with this dish — heaps of carnitas, sour cream, pico de gallo, beans, guacamole, cheese and jalapeños — though that sort of excess is in keeping with the restaurant's spirit. Sober, and with a table of fewer than six people, it's a little much, even if my 22-year-old self understands the appeal to the inebriated set.

If the thought of a Mexican version of a Philly cheesesteak intrigues you, try the carne asada torta. Small hunks of well-marbled beef are overstuffed into pillow-soft bread that's been slathered with mayonnaise. The grease from the meat and the mayo mingle and soak into the bread for an effect that is pleasurable in the way eating a deep-fried stick of butter might be: very much so .... for about one and a half bites. However, a little relief from the condiment bar (onions, spicy chile sauce) balances it out for a delicious sandwich. 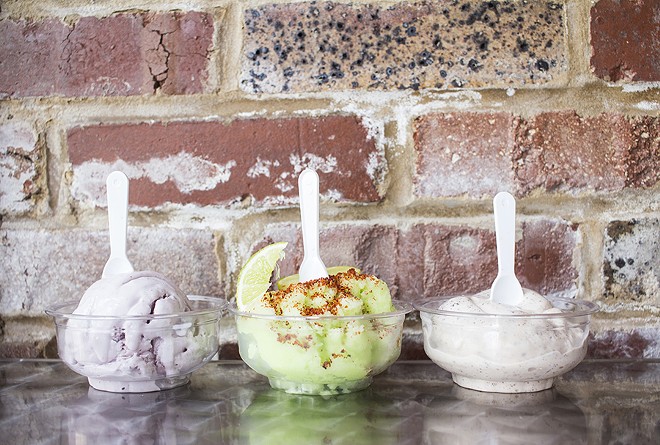 After such a hearty meal, eating dessert may seem like an impossible undertaking, though it would be a shame to miss out on Taco & Ice Cream Joint's post-dinner treats. Mr. Rico makes every last flavor of ice cream himself, and the options are nearly endless — rose, avocado, bacon, mango and bubblegum, to name just a few. The chocolate de abuelita is not to be missed if you are a fan of cinnamon and chile-spiked Mexican hot chocolate, nor is the excellent blackberry, which uses the juice to flavor the cream and whole pieces of the fruit for texture.

If ice cream seems too heavy, popsicles in flavors of lime, mango and strawberry — also housemade — are excellent palate refreshers. For something a bit more exotic, opt for the mangonada. Made from mangoes, lime, chiles, tamarind and chamoy sauce (a sour and salty fruit-based condiment), this complex mix of sweet, tart, spicy and savory is a traditional Mexican delight.

Actually, that's the best way to describe the Taco & Ice Cream Joint — a traditional Mexican delight, and one with so much to offer it's a feast for all the senses. And though those senses will no doubt be overloaded after the Rico family is finished with you, you'll be happy you hung on and enjoyed the ride.