What is the point, you might wonder, of placing a gigantic rainbow-colored, unicorn-shaped lollipop into the even more gigantic Very Happy Un-Birthday milkshake that's already garnished with a snickerdoodle cookie? And whipped cream. And sprinkles that coat the entire top-third of the glass. There's even a full-sized cupcake — it too covered in whipped cream and its own layer of sprinkles — balanced atop this spectacle. The lollipop could be considered the cherry on top of this aptly named Freak Shake, were there not an actual cherry on it as well.

To answer this question, you must step inside the mind of a six-year-old — in this case, my daughter — who saw the sucker not as a gratuitous addition to an over-the-top confection but as an opportunity. Using it as a spoon, she dunked the lollipop all the way to the bottom of the glass and dug out the ice cream and whipped cream, with melted sugary cream smeared all over her face and dripping from her hands to her elbows. At one point, the "unicorn sucker," as she called it, proved to be the perfect implement for chiseling off the layer of vanilla frosting and sprinkles that surrounded the glass. She was a hot, sticky mess, and she was living her best life.

This scene is precisely what Lodging Hospitality Management, or LHM, had in mind when they conceived of the Soda Fountain, a 1950s-style ice cream parlor and diner at the reimagined St. Louis Union Station. After purchasing the landmark property in 2014, LHM knew they wanted to do something grand that would reinvigorate a place that was once a must-visit destination, whether in its first incarnation as the city's rail hub or its reinvention in the 1980s as a dining and shopping destination.

Their first step was to renovate the hotel and its iconic Grand Hall. What to do with the back part of the property, however, required more thought. As they looked around to other cities of similar size, they realized that St. Louis' lack of an aquarium was an anomaly. After settling on that for the interior of the property, they came up with the idea for the St. Louis Wheel, a miniature golf course and a carousel. The lake would be turned into a light show with flames shooting out of the water to music, and there would be a ropes course, a mirror maze and a playground. All they had left to do was plot out the food options.

Originally, LHM thought they had that figured out. All the way up to 2017, the Hard Rock Café was supposed to stay put, and, at the time, it made sense. The restaurant chain was known throughout the country as an entertainment destination, so it seemed like a good fit. However, when the Hard Rock pulled out, LHM saw their opportunity to create a restaurant that would be even more cohesive with the St. Louis-themed, World's Fair-inflected vision they had for the property.

A soda fountain made perfect sense. Not only would it nod to the 1904 World's Fair/Louisiana Purchase Exposition and St. Louis' alleged role in inventing the ice cream cone, it also would evoke the sort of nostalgic, family-friendly whimsy that they wanted the property to offer. With that vision in mind, LHM partnered with the Lawrence Group to help them convert the former Hard Rock space into a pastel-hued fairytale land: part soda fountain, part diner, part candy store and all fun. 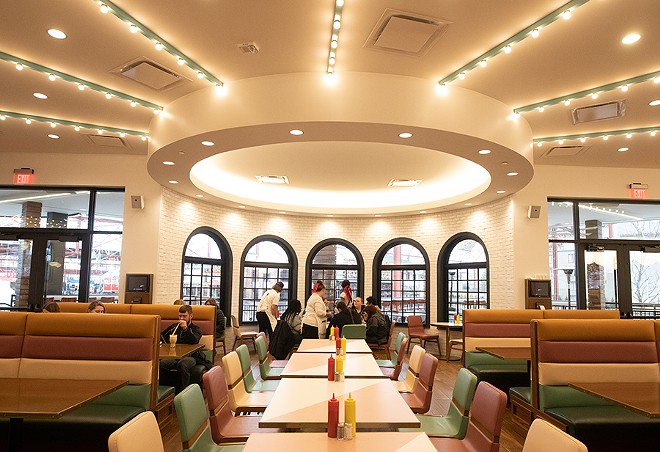 You don't have to be six to appreciate the stunning aesthetic that LHM has brought to life. The moment you step in the door, you feel as if you are being transported into a Neapolitan-colored dream. Pale pink, white and pistachio-green paint and floor tiles cast a pastel glow, and round glass lights line the ceiling to make you feel as if you are on a carousel. Although the restaurant occupies 10,000 square feet, it's smartly divided into three separate areas — the soda fountain counter and a dining room, a central dining room and a retro candy shop — to make it feel less cavernous. In the evenings, the room is particularly magical, as the twinkling lights from the St. Louis Wheel, carousel and other attractions glitter through the restaurant's many windows, lighting up the room with a jewel-like twinkle.

If LHM needed confirmation that their idea for the Soda Fountain was a good one, they got it in the form of the overwhelming reception they've received. Though there was no wait on either of my visits — which were on weekdays with no St. Louis Blues home games — the restaurant is already famously busy, with wait times as shocking as its Freak Shakes. On weekends, it's been known to have a four-hour wait time, which would prohibit dining there were it not for the fact that the restaurant uses Yelp Waitlist and has an entertainment complex mere steps outside its doors.

To accommodate the potential for such wait times, chef Russel Cunningham (who oversees all of the restaurants on the Union Station property except for Landry's Seafood House), smartly kept the Soda Fountain's menu simple and straightforward. However, at a restaurant that easily could have phoned it in with sub-par, frozen concession stand food because of its captive audience, he does this simple food well. A griddled double cheeseburger is the quintessence of the form — crispy around the edges, juicy in the center, topped with molten American cheese that soaks into every crevice of the patty and garnished with crisp iceberg lettuce, tomatoes, raw white onions and pickles. The soft bun is perfectly griddled, and its buttery top glistens under the carnival lights overhead. It's the sort of easy comfort you want from an amusement-park-adjacent eatery.

The fried chicken sandwich is equally well executed. The thick, breaded chicken breast is shockingly juicy, its golden-brown coating nicely seasoned with just a whisper of black pepper. Tucked into a soft, mayonnaise-slathered brioche bun, the simple lettuce and tomato garnish add a welcome pop of crisp refreshment to the deep-fried chicken.

Both the egg salad sandwich and tuna melts were pleasantly surprising in their execution. Rather than mushy — as is so often the case with these salads — both were perfectly dressed with enough mayonnaise to allow the components to adhere together, but not so much that they were overwhelmed by the condiment. The egg salad, in particular, had a wonderful, rustic-chopped texture that paired well with the accompanying wheat bread.

Even a straightforward grilled cheese is elevated; the thick toast acts like a sponge for so much butter that it forms a glorious crust. The sandwich is a triple-decker, and you get this buttery effect on the interior piece as well. It's a nice contrast of texture with the generous and melty layers of cheddar and jack cheese that tie everything together.

Crinkle-cut fries and onion rings, served a la carte, are standard but well prepared. Unfortunately, the bacon on the BLT was not so impressive. Chewy and overcooked, it may have been passable as an addition to a chicken sandwich or cheeseburger, but as the star of the show on the BLT, it was lacking.

Nothing is lacking when it comes to the Soda Fountain's desserts. Admittedly, these are designed to dazzle with their eye-popping decadence. However, there is substance as well; the restaurant uses ice cream from local Clementine's Naughty and Nice Creamery as the base of all of its desserts, and the quality is evident in everything from a decadent and subtly nutty chocolate malt to the restaurant's signature Freak Shakes.

Consider the Cinnamon Spice & Everything Nice, a cinnamon roll in milkshake form, its vanilla cream and candied pecan encrusted rim evocative of a loaded morning bun. Whipped cream caps the glass like a snow-covered peak, and a full-size cinnamon roll somehow defies gravity, placed atop the whipped cream and barely resting on two straws and some strategically placed chocolate pieces. However ridiculous the presentation, it never obscures the gently spiced cinnamon and vanilla richness of Clementine's ice cream — a feat that speaks to both the quality of the ingredients and the balance of flavors.

The Everything But... is pure spectacle, but it also has this thoughtful flavor balance. Vanilla ice cream serves as the base for a Jenga-like sculpture of chocolate-covered pretzels, potato chips, a chocolate-dipped pretzel rod, caramel sauce, a peanut butter cup and a whole chocolate-chip cookie. For those who like to mix their sweet and savory, this one is the motherlode.

The Soda Fountain's boozy concoctions may not be as Instagrammable, but they pack a punch that's just as powerful as the Freak Shakes' visual intensity. The Way We Were is a fantasy-land version of a Screwdriver, the blood orange vodka so prominent through the blood orange soda syrup and vanilla syrup, you wonder if there should be a two-drink maximum. The añejo tequila in the Hanoi to Oaxaca is subtler, but it still adds a noticeable warmth to the dulce de leche, coffee extract and milk concoction.

And of course, the Soda Fountain can't let the kids (or non-drinkers) have all of the fun: The St. Louis Standard is the boozy answer to the Freak Shakes. It's made with Clementine's gooey butter cake ice-cream base, a buttery sweet canvas for Still 630 Expedition rum and Golden Road brown ale. It's like a cold version of a hot-buttered rum.

As I found myself using an oversized blue and white straw to mix the generous pour of rum into the gooey butter cake ice cream, I glanced over, noticed my daughter now using her "unicorn lollipop" to slice her shake's cupcake garnish in half and realized that the effect the restaurant had on us was not all that different. That's the magic of burgers, shakes, sprinkles and carnival lights: They can bring out the kid in you.