The Shape of Water

Directed by Guillermo del Toro. Written by Guillermo del Toro and Vanessa Taylor. Starring Sally Hawkins, Michael Shannon, Octavia Spencer and Doug Jones. Opens Friday, December 15. Now screening at the Landmark Tivoli Theatre and Plaza Frontenac
Guillermo del Toro has firmly established himself as a gifted creator of fantastic landscapes, from the dark fantasy of Pan’s Labyrinth to the more routine fanboy terrain of Pacific Rim and the Hellboy films. Push aside his obvious extended-adolescent love of the science-fiction/horror/fantasy genres and you’ll find the soul of a romantic, as revealed by his previous film, the underrated gothic ghost story Crimson Peak.

Del Toro’s new film, The Shape of Water, takes all of the director’s fancies and obsessions and fashions them into an unfamiliar but somehow perfectly constructed creation. It’s a love story, a Cold War adventure, and (probably closest to the director’s heart) an old-fashioned monster movie. It’s an unpredictable, unwieldy film, leaping from violence to comedy, from a loopy comic-book plot to passionate romance. It’s over-the-top, yet completely convincing on its own terms. In short, it’s a feverish dream of a movie thrown onto the screen with abandon.

Here’s the premise, set sometime in the early 1960s. Elisa (Sally Hawkins, who is simply wonderful) is a lonely, mute woman who lives above a decaying movie palace. She works with Octavia Spencer on the janitorial staff of a government aerospace facility, spending her free hours watching old musicals with her neighbor Giles (Richard Jenkins), an aging graphic artist. After the arrival of a new discovery referred to only as "the asset," the government facility is placed under heightened security by the high-strung, tic-ridden commanding officer (Michael Shannon, at his scenery-chewing best). 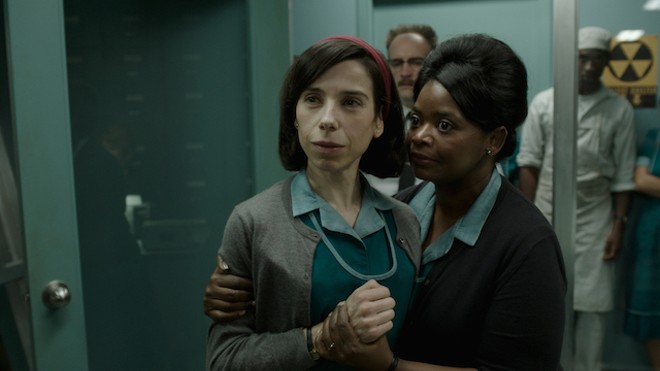 The endangered asset, Elisa discovers, is the Amphibian Man (Doug Jones), a human-fish hybrid. He’s essentially the Creature from the Black Lagoon, only with more soulful eyes. And once Elisa sees those eyes, The Shape of Water turns into an unrestrained story of fantastic love, albeit one with the occasionally gruesome visual effect, a friendly Soviet agent (Michael Stuhlbarg) and even a nod to Alice Faye musicals.

What makes The Shape of Water work so well — aside from the uniformly excellent performances, the gorgeous production design and cinematography, and the extraordinary human special effect that is Doug Jones — is the absolute sincerity of del Toro’s direction. Yes, nearly every minute of the film is fantastic and frequently extreme, but whether he’s indulging in gentle erotic fantasies, recreating the faux-modernism of the historical setting or simply letting his characters go about their ordinary business, there’s not a trace of kitsch, not a second of retroactive sneering at the past or belittling his low-level spy plot with a campy wink.

Where other films (like the recent It) keep their fantastic elements at bay, reserving them for easy shocks, del Toro eliminates the boundaries between the imaginary and the ordinary, as sensitive to the appeal of Elisa’s mid-twentieth century world as he is to the mad-scientist’s-lair design of her workplace. Like his heroine, he’s instinctively comfortable with the unusual, not alarmed. Only a filmmaker with such a love for monsters and the unique could have made such a tale of unique and monstrous love.