The RFT's 2016 Guide to Shopping Local in St. Louis

We gave five shoppers $100 each. Here's what they found in Soulard, the CWE, Downtown, South Grand and Cherokee 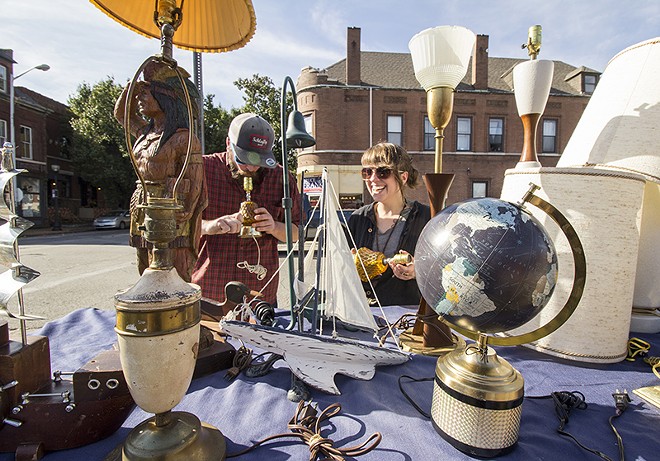 Because of the timing of the shopping trip I decided to set a theme of buying décor for the Fortune Teller Bar — our four-year anniversary party was coming up and we wanted to contribute to our more eclectic style of decorating. I took my friend Nicole, who is a bartender and does maintenance and decorating and management stuff for the bar.

The first place we went was Refab (3130 Gravois Avenue, 314-357-1392), one of my favorite places in St. Louis. They are few blocks off Cherokee at Michigan and Gravois — a nonprofit organization that deconstructs buildings, then sells the things they deconstruct. It's just multiple floors — probably football fields — of cool architectural supplies. We were looking for stuff that would look cool just hanging on the wall, so we went to the second floor where their smaller items are and we found this really cool old metal steering wheel, from a 1940s international pickup truck, that we thought would make a really cool accent piece at the bar. It was a piece after my own heart — I have a soft place in my heart for old pickup trucks. That was $20.

So after Refab we went by STL-Style (3159 Cherokee Street, 314-898-0001). The Vines boys over there do a really cool thing where they turn some of their top Instagram posts into postcards. We bought like fourteen postcards, with the idea in mind that we would later hit up the old antique shops on Cherokee, trying to find an old window that we could put the postcards on the back side of the glass and hang it on the wall. I always look for a way to support the Vines. It's easy to do; Jeff and Randy Vines are some of the best cheerleaders St. Louis has ever had, and they just do a really fantastic job of representing the city through merchandise they design and create in-house. It's a really easy place to buy something for someone that is kind of hard to shop for. If you're buying something for someone outside of St. Louis, you can share your own civic pride very easily and affordably, or if you're buying something for someone who lives in St. Louis, it's a no-brainer. You can make custom t-shirts there or you can pick from 100 different designs that are St. Louis-specific. It's one of my favorite places to shop; I go there as often as I can. This time I spent $15.22 on the postcards.

From there we just started walking down Cherokee and we stumbled on a flea market, which has been happening lately in Love Bank Park (2851 Cherokee Street). We met a rad guy who runs the flea market named Antoine; he's open Saturday and Sunday from 6 a.m. to 8 p.m. We found this pair of really cool small lamps. We are always on the lookout for little lamps because they can make a great gift or look really cool in the bar — we like everything to be a little bit different. We don't have any matching chairs or anything; it's a very eclectic taste, and the lamps fit perfectly. They cost $15.

Shopping is really fucking exhausting, so we stopped at Yaqui's (2728 Cherokee Street, 314-400-7712) and we split a shot of Old Overholt with a Coke back — with tip that was six bucks.

From there we kept walking east. My phone was dying and I habitually lose my phone chargers — like once a week. I lose phone chargers faster than I lose sunglasses. So I ran over to Communication Depot (2629 Cherokee Street, 314-771-0000) and got a phone charger for $5.

Then we went across the street to El Chico Bakery (2634 Cherokee Street, 314-664-2212) and each had a tamale and a soft drink. Saturdays and Sundays only they have the best damn tamales you can imagine. I was a little bit worried because they sell out pretty early, but they had two greens left. So we each had a green tamale — they're just absolutely incredible. There we spent $6.30.

Then we went to Flowers to the People (2317 Cherokee Street, 314-762-0422) because I wanted to get some stuff for the monkey shrine at the bar, but they were closed for a wedding. So we went to Lady Jane's Antiques (2110 Cherokee Street, 314-225-5519) — this is where we were hoping to find a window for the postcards we got from STL-Style. We looked around at everything and saw some really incredible stuff. They've just got a whole plethora of really cool old windows where the paint is chipping, and we found one we liked. We tried to give the owner some money but he refused to take it and said we owe him some beers at the bar instead.

On the way back we saw another flea market in the City Kitty Courtyard (2125 Cherokee Street). STL City Kitties is a nonprofit organization that promotes creating habitats for feral cats so that they can be trapped, then neutered/spayed and released. So they were having this massive flea market, and we ran by there and got some little cloth Indian elephants on a string for the monkey shrine. That cost us a $10 donation.

Then we stopped by Saint Louis Hop Shop (2606 Cherokee Street, 314-261-4011), our last stop. If you're looking for cool craft beer, that's the place to go in St. Louis. I got a four-pack of Schlafly Proper Cider — it's really awesome. It's made in collaboration with brewers in Devon, England, and it's a traditional cider made with a straw press. They put straw down on this giant wooden table, then they put the apples, then more straw and more apples, and they mash it down with a giant tree trunk. Pretty rad, really good stuff, and the guys at Hop Shop are awesome, really knowledgeable. They can package gifts, they can do gift cards and you can taste beer there. They're not partnered, but their store opens up to a nonprofit bakery next door. I had to dig into my pockets for the four-pack and wound up spending about $102 total on the entire trip.

Honestly, this was one of the most challenging things I've done. There are so many amazing places on Cherokee to shop, it's hard to figure out where I would spend $100. There are dozens and dozens and dozens of places, which is rad, and you can do all your Christmas shopping in one stretch. I do it every year. I take one afternoon, get drunk, go down one side of the street and come back down the other. By the end of it I have the list done and a good buzz too. — as told to Daniel Hill

Turn the page for more shopping trips, including one in the Central West End.