Written by William Shakespeare. Directed by Paul Mason Barnes. Presented by the Repertory Theatre St. Louis through November 5 at the Loretto-Hilton Center (130 Edgar Road; www.repst.org). Tickets are $18.50 to $89.

Hamlet begins in darkness with the appearance of a dead man's ghost and ends with the floor knee-deep in corpses, and in between these two moments in time the title character muses constantly upon the nature of death. Right out of the gate, the Repertory Theatre St. Louis' first-ever production of the play is steeped in sepulchral colors, sights and sounds, from Michael Gaino's set of skeletal scaffolds and castle walls frozen mid-collapse to the gloomy black uniforms of Denmark's soldiers.

The last sound you'd expect to hear in Castle Elsinore is laughter, and yet there is much of it in the Rep's current production, mostly coming from the audience. It is a tonally jarring show that works to establish the funereal mood one expects from Hamlet, only to break that spell with a bit of physical comedy. Even more jarring, most of those laughs come courtesy of that noted bringer of jollity Hamlet.

The plot is one of revenge much chewed over and delayed. Hamlet’s twin struggles — to find both the proof that his uncle has murdered his father and then the courage to kill his uncle — comprise the bulk of the play. Hamlet's monologues about the difficulties of life and the nature of death have gained the drama the reputation of "the greatest play in the English language." That reputation is also an anchor, making the hype far outstrip any possible production. You invariably compare what you're watching to every other play you've seen, and Hamlet often suffers for the comparison. (The actual greatest play? Wole Soyinka's Death and the King's Horseman. Fight me.) Matters are not helped by the maudlin title character, who can make for a mopey and whiny hero.

That is not the problem with this production, which is solid and sometimes even rises to greatness. But overall it still left me cold, and I worry the problem is twofold: both the weight of the expectations carried by the play’s reputation and the shortcomings of this particular Hamlet. 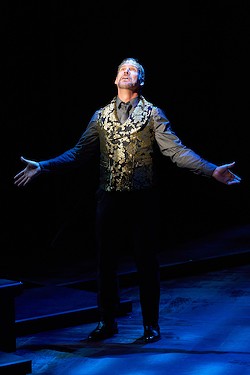 Indeed, the Rep’s Hamlet (Jim Poulos) is a cheery fellow. Feigning madness to mask his true intentions from intimates and the extended court alike, Poulos' Danish prince veers into zaniness when trying to baffle his observers. He rides an imaginary bicycle, and at one point leaps into his uncle/stepfather Claudius' arms to plant an unexpected kiss. It's a heavy-handed approach to insanity that rings false throughout the show, whether faux (Hamlet) or actual (Ophelia). Kim Wong’s portrayal of Ophelia’s descent into lunacy feels like something from another era, all splayed limbs and sing-song delivery. Both of these exaggerated performances feel artificial and smack of “acting.”

Poulos is much more effective as the driven Hamlet, who occasionally lowers his manic defenses to reveal his inner turmoil, staring daggers at friends-turned-royal-spies Rosencrantz and Guildenstern (Ross Cowan and Stephen Hu) while lecturing the court, “After your death you were better have a bad epitaph than their ill report while you live." The "their" refers to his favorite troupe of actors, but the "death" is intended solely for the hapless spies.

Michael James Reed delivers an excellent performance as Claudius, a man driven by devouring ambition for absolute power and also scourged by grief at what he's done to win a kingdom. You get the impression that Claudius' might be a better king if not for his inherited councilor Polonius (a very good Larry Paulsen), who takes the lead on solving Denmark's Hamlet problem. Most of Polonius' advice is aimed at maintaining the status quo, which inadvertently makes things worse — particularly for himself.

But then things go badly for everyone across the board. A grasping king, shoddy advisers, dim hatchetmen and an indecisive prince all find death by the end. One can only hope that the new ruler — Fortinbras of Norway (Jeffrey Cummings) — does better. Undeterred by the mound of bodies, he casts a calculating eye around Elsinore; surely this pragmatist will succeed.