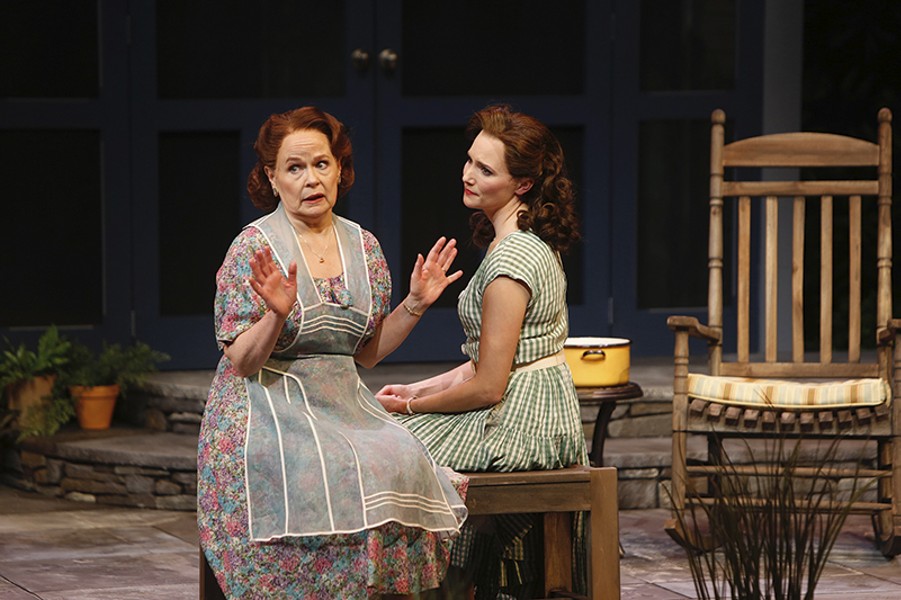 Written by Arthur Miller. Directed by Seth Gordon. Presented by the Repertory Theatre of St. Louis through January 29 at the Loretto-Hilton Center (130 Edgar Road; www.repstl.org). Tickets $18 to $81.50.

When All My Sons opens, enough time has passed since the end of World War II that America has seemingly returned to normalcy. Joe and Kate Keller's backyard is back to being the social hub of the neighborhood; their son Chris has been discharged and now works for the family business.

But this sense of normalcy is a lie. All of the neighbors know that Joe barely escaped a prison sentence for his company's role in manufacturing defective engine cylinders, which led to the death of 21 American pilots during the war, and Chris still suffers from an undiagnosed case of post-traumatic stress disorder brought on by the loss of his entire company. On top of all that, Kate refuses to accept that her oldest son Larry, who has been declared MIA, is most likely dead. When Chris invites Larry's old girlfriend Ann for a visit, he sets his family on course to uncover every ugly truth behind their happy facade.

Arthur Miller plaits these strands together to create a fraught drama about lies, honor, personal responsibility, morality and love in All My Sons, and then he rips them apart. The play premiered just two years after the war ended, but Repertory Theatre of St. Louis' production (now through January 29) feels so new and shocking that you'd swear Miller's ink was still wet on the page. Even if you know from previous productions how the Kellers' world falls apart, the end is still a short, sharp shock that stings because it changes nothing.

John Woodson brings Joe Keller to laughing, boisterous life, making him likable even as his true nature is revealed. He's a grade school drop-out who has built a successful company partially through his bluff charm. With that success, he's given Chris (Patrick Ball) a better life.

He's also unwittingly created a gulf between them. Chris is college-educated, and his vocabulary and his idealism both confuse Joe. Ball plays Chris as a man who stands simultaneously in the future — his plan is to propose to Ann (Mairin Lee) during her visit — and in the past, where his dead soldiers forever remain. "They didn't die — they killed themselves for each other," he explains to Ann, trying to make her understand how lost he feels in a world where new cars matter more than the sacrifices made by his generation.

And then there's Kate. Margaret Daly finds Kate's own nobility in her loyalty to her lost son, but also shows flashes of a seemingly unbreakable will. She refuses to listen to Chris' pleas that she accept Larry's death and sharply rebukes his talk of starting a relationship with Ann. It's Ann's father who was found guilty of approving those faulty engine parts, and he's still serving his sentence. Besides, in Kate's mind, Ann is Larry's girl.

And so something must give. The arrival of Ann's brother George (Zac Hoogendyk) signals the emptying of the Keller's backyard — this time for good. Director Seth Gordon has a remarkable facility for convincing you that a false ending is in fact the real ending, even when you know it's not. There is a brief period of quiet that feels like a happy conclusion. All the darkest secrets are still shrouded, and then George tells Kate, "I never felt at home anywhere but here."

He's the only honest man in town, but the Kellers are not a family that deals with the truth. Hoogendyk's quiet, contented delivery of the line is a soft hammer that breaks the night wide open. Those planes cannot be uncrashed, Chris' comrades cannot be unsacrificed and no bullet can be unfired. Being good should matter more than being greedy, but the truth is that most people aren't heroic. They're just people, fallible and prone to making bad decisions, and no dose of truth can change that.