The Reason for the Season in Song 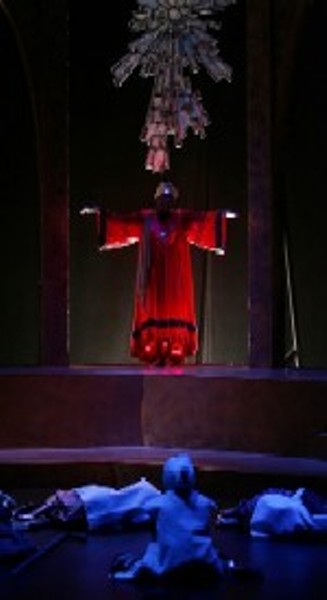 Langston Hughes deemed Black Nativity his “gospel song play.” Act one is indeed all of those things, a soaring and gorgeous retelling of the birth of Christ that emphasizes the humanity of the people who witnessed the event. Director Ron Himes and Musical Director Diane White-Clayton mix American and African folk songs with traditional religious music (and one well-placed rap song) to fulfill Hughes’ vision of a new, fully integrated black art form. Brilliant costuming by Reggie Ray and clockwork choreography by Keith Tyrone add visual punch to fantastic performances from Herman Gordon as the singing Joseph and the ethereal Heather Beal as the dancing Mary. Act two has a modern gospel church setting, and while the performances are still powerful and moving, the sense of story is minimal. This is a traditional praise performance, brimming with reverence and passionate singing, but lacking the narrative and inventiveness of the first half. That magnificent first act is more than worth the price of admission, however. Presented by the Black Rep at the Grandel Theatre (3610 Grandel Square; 314-534-3810 or www.theblackrep.org) through December 27 (no performances on Christmas Eve or Christmas Day). Tickets are $17 to $33.
Thursdays-Sundays; Dec. 26-27. Starts: Nov. 27. Continues through Dec. 20, 2009