The Post Wades Into the Story of the Pentagon Papers, With Little Enthusiasm for Politics

​NIKO TAVERNISE © 2017 TWENTIETH CENTURY FOX FILM CORP AND STORYTELLER DISTRIBUTION CO LLC The editorial staff of The Washington Post gathers around the TV to watch the nation respond to its work.

There may be more important films than The Post, but few that seem quite as timely, even though it deals with events that took place nearly half a century ago. Steven Spielberg's film is a celebration of the freedom of the press, a heroic story of lies and secrets, of journalists and publishers fighting to present to the truth to their readers, of a government that is often hostile to their efforts. Sound familiar?

Some historical background: The material that came to be known as the Pentagon Papers was originally a 47-volume history of America's involvement in Vietnam, commissioned by Secretary of Defense Robert McNamara in 1967 as the war was raging. McNamara claimed that he wanted a definitive historical record for future study, but that may be stretching the truth. The documents — of which only fifteen copies were printed — were classified "top secret," their existence known to only a few. (Not even the president or secretary of state knew.) Daniel Ellsberg, a military analyst for the RAND Corporation, a foreign policy think tank, had worked on the project and knew that it contained proof that the scope of the war was far greater than the government was telling its citizens.

By 1969, Ellsberg had become critical of the war. He managed to copy nearly all of the research paper, eventually getting it to a New York Times reporter. After much deliberation, the Times began publishing excerpts in June 1971, only to be served with an injunction by the Department of Justice. Days later, the Washington Post began its own series of excerpts, followed by more than a dozen papers across the country. Only eight days after the initial publication, the Justice Department's case against the now-united Times and Post went all the way to the U.S. Supreme Court. 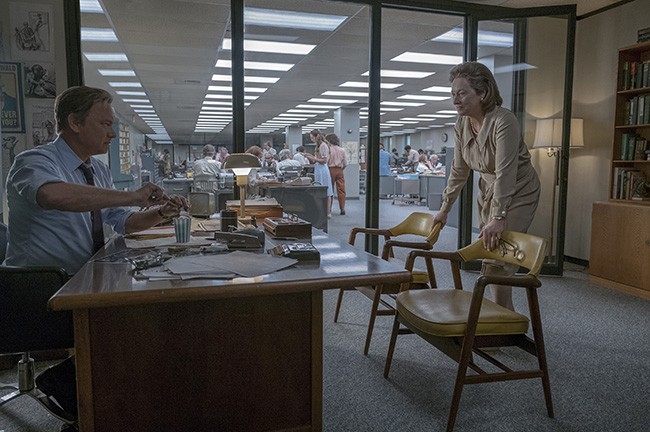 The Post is the story of how the Washington Post — described in the film as a struggling provincial paper trying to compete with established giants like the Times — pursued the story and stood up to both the power of the Nixon White House and the social strata of the D.C. elite. The story forces editor Ben Bradlee (Tom Hanks) and publisher Katharine Graham (Meryl Streep) to weigh the balance between a major revelation about what the government is saying and doing in Vietnam and their own relations with many of the same government figures in Washington society. In a sense, it's All the President's Men a distance removed, the feet-on-the-ground reporting replaced by the arguments of publishers who worry about how the story will affect advertising or embarrass their White House and Pentagon friends at cocktail parties.

While that may sound like a slightly superficial reading of the importance of the Pentagon Papers, it's not entirely unfounded. To re-use a famous Vietnam analogy, The Post is about winning hearts and minds, about how even the Washington establishment became aware of the folly of the war and the levels of deception that allowed it to escalate. While Bradlee and Graham are far removed from both the fighting in southeast Asia and the fighting on the streets, they have to struggle with their own consciences and their roles as members of a free press. In some ways, it's like Vietnam's Mrs. Miniver, showing how the ugly realities of the war found their way into newsrooms and private homes.

It goes without saying that Hanks and Streep are wonderful, but most of the film's energy rests on the simple moral strength of watching people — in this case, the many Post reporters who worked together to edit the thousands of pages of Ellsberg's text — come together with a common goal.

The Post tells a strong story, maybe even a great one, but it's also a curiously impersonal film. Spielberg seems indifferent to the content of the Ellsberg leak, and far more interested in the mechanics of its publication, tracking his camera along the conveyors of a printing press as it pours out a first edition or following on the heels of errand boys as they deliver messages across town. He loves exploring the archaic technology of the period — pay phones! Black and white television! Room-sized Xerox machines! — but shows little interest in its politics. Despite a cursory scene in Vietnam at the beginning, he has little to say about the war or what it was doing to the country. The scenes of antiwar protests are as false as what you might have seen on any TV sitcom of the day, with generic slogans and central-casting hippies, while President Nixon is rendered as a familiar cartoon figure, shouting into his phone in the middle of the night.

There's even a coda that feels like the narrative equivalent of a Marvel comics post-credit scene, suggesting that the whole film can be reduced to the prequel to a remake of All the President's Men. Hanks and Streep give the film its personality, but much of the film is treated with the indifference of a bored student filling out an American history quiz (and perhaps suppressing the urge to draw flying saucers on its margins).

Like many of Spielberg's other history lessons (Amistad, Munich, Lincoln and Bridge of Spies), The Post is filmed with a sense of duty but not much enthusiasm. He knows that he has to treat the material with respect, but he can't hide his lack of interest. At its best the film speaks loudly about the need for a free press and the difficulties of defending one; at its worst, it equates the quagmire of Vietnam with the social embarrassment of having Secretary McNamara as a dinner guest just as you've called him a liar on your front page. Why, we have to wonder, is the director so disengaged from history, so unaffected by events that happened within his own lifetime?