Now Grown Up, the Orwells Still Have the Power to Shock

KELLY PULEO Wild stage antics are par for the course for the Orwells -- but the band has the musical chops to back them up.

In an age when most rock concert attendees listen politely and shoot iPhone videos rather than, you know, moving around or — God forbid — forming a mosh pit, you can still count on the Orwells' shows to get a little crazy.

Because, look: Trouble is kind of their thing. General audiences were first introduced to the Illinois garage-rockers through a now-infamous 2014 appearance on CBS' Late Show with David Letterman. In the second verse of their single "Who Needs You," cocksure frontman Mario Cuomo abandoned singing in favor of writhing around on the floor, thrusting his pelvis at the air and then leaving the stage entirely to slump into a seat beside Dave himself. And that was by no means an anomalous performance — it just happened to be televised.

Early on, the malfeasance could have been chalked up to the wildness of youth, guitarist Matt O'Keefe says over the phone ahead of the Orwells' show at the Ready Room on April 10. After all, the band released its 2012 debut album, Remember When, when its members were only seventeen years old. They signed a major-label deal before anyone in the band could legally buy beer.

"Whenever we played a show, we wouldn't get together beforehand and say, 'We've gotta be crazy and jump around.' We were just really young, and when we got on stage something would possess us," O'Keefe says. "It's hard to control what you do when you're put on a stage and playing music in front of a lot of people."

All five members of the band are now entering their mid-twenties, seasoned by several years of heavy touring. But they're still whipping venues into frenzies. During a show in Texas just last year, Cuomo got in a fist-fight with a sound technician after repeatedly spiking his mic between his legs like a football player who just scored a touchdown. 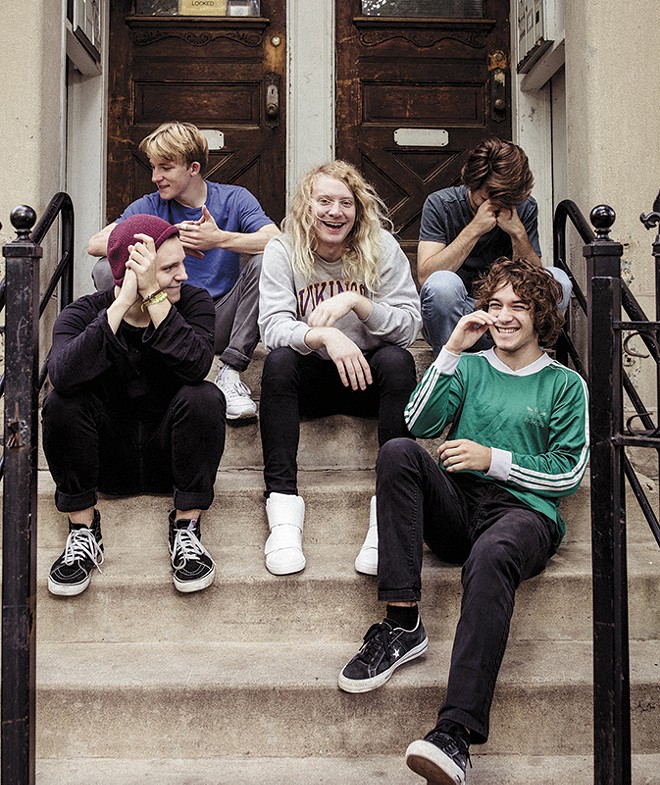 "We always try to be spontaneous and just do what we do," O'Keefe says. "We don't hold ourselves back. We've played with some bands where it feels very synchronized. They figure out what works and just keep doing it every night. That's creative suicide, because if you don't push yourself out of your comfort zone, you're never going to create anything new."

The Orwells are on a national tour to promote their third album, Terrible Human Beings. Stage antics notwithstanding, they have matured from a creative standpoint. The record has all the building blocks of Remember When and 2014's Disgraceland — roughneck lyrics about hookups in pickup trucks, sleazy barroom riffage, squealing amplifier feedback — but it demonstrates a sharper focus and less reliance on the garage-rock revival blueprint laid out by the Strokes. The Orwells are stepping into their own sound.

That's the product of a stripped-down approach in the studio, O'Keefe says. Working with producer Jim Abbiss, O'Keefe and fellow guitarist Dominic Corso laid out the skeleton of each song on acoustic guitars to fine-tune specific sections. On previous records, the band's songwriting process was jam-based — more like shooting in the dark. "One of us would play a chord change, and if we happened to get lucky and everyone somehow fell in perfectly, there would be a song," O'Keefe says. "If not, it would just get burned. We realized we were losing a lot of good songs because we weren't just getting lucky immediately with chord changes and the melody."

The sounds on Terrible Human Beings are weird and dark, but the songs themselves are rooted in pop music, O'Keefe says. "This time around, we decided we would write catchy pop tunes — you know, verse-chorus, verse-chorus, bridge-chorus — and then just try to fuck them up. Get something pretty and nice and just slash the thing up and make it dirty." The group also took pains to avoid obvious and overly familiar chord progressions, playing with the listener's expectations.

The Orwells, in other words, are getting serious about the craft. They have come a long way from banging out power chords in suburban Chicago.

Case in point: The band was recently announced as the opening act for Weezer's run of European stadium shows this summer. On one hand, it's a surreal opportunity for a group of garage punks, O'Keefe says. "You grow up listening to a band, and then you're playing shows with them across the ocean."

On the other, the guys know exactly what it's like to open shows for big-name bands. "There will be a lot of folded arms, because fuck the opening band."

"Like, if we had gotten this opportunity with Weezer when we were eighteen or nineteen years old, we would have thought we were going to be the next biggest band in the world," he says. "Now we're pretty sure that's not going to happen, so we can just focus on writing good songs."