Maybe you have seen this video by now: A Black doctor named Susan Moore lies in the bed of an Indiana hospital, reaching out to whoever might be watching her Facebook stream as she describes trying and failing to convince a white doctor of the severity of her condition. The white doctor, Moore says, dismissed her concerns and told her he wouldn't "feel comfortable giving [her] any more narcotics," despite excruciating pain in her neck.

"I was crushed," Moore says, tears welling in her eyes. The 52-year-old was admitted to the hospital in December after testing positive for COVID-19. In the video, she has an oxygen tube in her nose, and her voice is raspy. "He made me feel like I was a drug addict — and he knew I was a physician."

The white doctor did not see her as a peer, Moore insists, and she has no doubt why.

"I put forth and I maintain," she says, "[that] if I was white, I wouldn't have to go through that."

Nurses and a patient advocate treated her with disrespect, and the white doctor recommended sending her home in the middle of the night, Moore says. It was only after a scan showed troubling substances in her neck and problems with her lymph nodes that they recognized she might be right.

"This is how Black people get killed," Moore says in the video, "when you send them home, and they don't know how to fight for themselves. I had to talk to somebody, maybe the media, somebody, to let them know how I'm being treated up in this place." 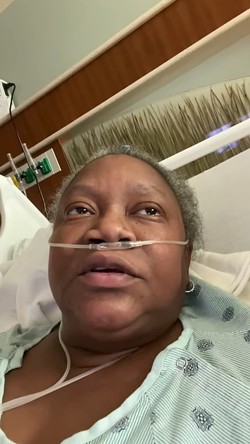 Sixteen days after recording her message, Moore died of complications of the coronavirus.

The video of her lying in that bed, hurt and angry, spread across the world. And if it outraged viewers in general, it resonated in particular with Black women. It wasn't just that listening to Moore's anguish was wrenching; it was that it was familiar.

For Brittany "Tru" Kellman, owner of Jamaa Birth Village in Ferguson, the disregard for Moore's suffering was an example of the bias that courses through the health-care system. Black women have for years reported being overlooked by doctors and medical staff who dismiss their concerns, even as study after study shows wide disparities in care and the resulting death rates.

Kellman says she experienced it as a pregnant fourteen-year-old. Her obstetrician had her induced, because she didn't want the Black teen's delivery to interfere with an upcoming vacation. Kellman ended up suffering complications and had a cesarean delivery.

Throughout the process, Kellman got the impression her doctor considered her to be little more than an inconvenience. It was traumatizing.

In Moore's video, Kellman recognized that same agony and frustration.

"Here she is, a prominent, educated person — I'm assuming middle class," Kellman says. "And the same thing happened to her."

It was Kellman's experiences being overlooked and talked down to by doctors that inspired her to open Jamaa. The center offers midwifery and doula services while also including some unexpected offerings, such as yoga and an apothecary garden, as part of a holistic approach to caring for mothers. Kellman and her team consider their clients' lifestyles and needs, extending well into the postpartum period.

The mission is to guide expectant mothers and their families through a healthy childbirth process. But Jamaa is also designed as a corrective to a health-care system where Black women are overlooked and suffer damaging, even deadly consequences. The crisis is especially bleak when it comes to childbirth. In 2019, the Centers for Disease Control and Prevention released a report that showed Black women die from complications of childbirth at a rate more than three times higher than that of whites. That gap widens to a mortality rate between four and five times greater than white women for mothers older than 30. The CDC looked at where the women lived and at the women's level of income, and they found the pregnancy-related mortality ratio for Black women was consistently and drastically worse.

The problem isn't with the women, Kellman says.

"Black women aren't dying during childbirth because they're Black — like their being Black is a disease," she says. "They're dying because of racism."