The Midwestern Swings for the Fences and Hits Every Pitch

MABEL SUEN The goods from The Midwestern Meat & Drink: pastrami, double cheeseburger, fried burrata toast and a selection of sides.

You don't even need to bite into the Midwestern's double cheeseburger to know how good it is. That fact hits you over the head the second this glorious, messy beast is placed in front of you — a realization informed not by what's between the pillow-soft egg bun, but what sits alongside it.

Made from aged brisket, the meat is coarsely ground and loosely formed into a crumbly, impossibly juicy burger that's more like a composite of beef than a tightly bound patty. As a result, charred bits of seasoned, well-marbled beef crumble off the bun, acting like bite-sized meat crunchies. These tiny nuggets are so gilded with fat, they glisten as the light hits. Seeing them is all you need to know that this is no ordinary burger.

But you'll want to know more, much more, for these meaty bits only whet your appetite for the main attraction. Because it's aged, the meat takes on a mouthwatering tangy funk, acting as a shot of brightness through all of the fat — an effect generally reserved for high-end steakhouses that can absorb the high cost of dry-aging beef. Homemade pub cheese, molten like tempered butter, covers the burger, soaking into every crevice so that each bite is an explosion of fat and goo. Combined with the mayonnaise-heavy fry sauce, the burger might be over-the-top indulgent, but a tart tomato jam walks it back, offering a burst of electric sweetness that cuts through the decadence. It's purely, utterly transcendent.

Ben Welch has only been making this thing of beauty since March, but he is no newbie to the business. A veteran chef whose career began 32 years ago as a dishwasher at Two Nice Guys in Webster Groves, the Johnson & Wales-trained Welch has made his rounds throughout St. Louis' kitchens as a chef, culinary instructor and consultant.

It wasn't until 2016, though, that Welch's star truly began to rise. That was when he and his father, Bennie Welch, opened Big Baby Q and Smokehouse in Maryland Heights. In no time, Welch's outstanding barbecue garnered him a reputation as one of the city's top pitmasters, thrusting him into the limelight throughout the smokehouse's not-quite-three-year run.

When Welch plotted his departure from Big Baby Q, he initially thought he might open an elevated soul food concept. Last May, he launched a pop-up series named for his grandmother, Lucy Quinn, and began looking at a restaurant of that name as his next move.

He put those plans on hold last fall after being approached by a former culinary school student, who'd gone on to co-found the Wheelhouse and Start Bar. The two wildly popular bars regularly pack in young revelers in the shadow of Busch Stadium, and the ownership group planned to take over the adjacent space that previously held Flying Saucer. This time, instead of another bar where food was an afterthought, they wanted to open a barbecue restaurant. Welch seemed like a natural fit for the gig, and he agreed to come on board as both chef and managing partner even while he continued to developing the Lucy Quinn concept. In late December, he shuttered Big Baby Q and turned his attention to the new place.

The Midwestern opened March 1, with big expectations for both its food and drink. In addition to Welch, the Wheelhouse group brought on Tony Saputo, one of the city's top bartenders, to run the beverage side of the operation. Together, Saputo and Welch represent a dream team, tasked with the challenge of applying their craft to an often-high-volume concept. It's a challenge — and one they succeed at with every turn. 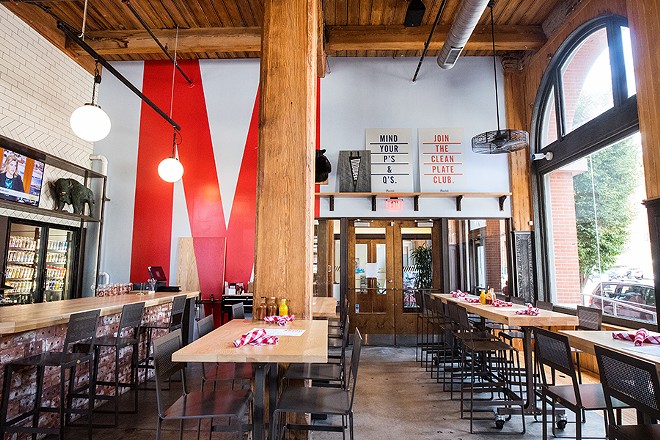 Part of Welch's success has to do with the creative freedom afforded by larger digs and a full-service restaurant. While he was able to work magic with barbecue at Big Baby Q, the Midwestern has allowed him to expand on barbecue basics to offer a more comprehensive, Southern-inflected menu.

That includes a full appetizer menu, with such Southern staples as deviled eggs, a creamy take on the original, thoughtfully garnished with turkey crackling that infuses them with salt and smoke. In that vein, fried green tomatoes are an elevated version of the classic, paired with sweet tomato jam that balances their tartness. Tomato aioli and luscious ricotta cheese garnish the dish for a flourish of decadence.

Welch's chicken wings show how his attention to detail elevates a ubiquitous bar staple into something memorable. The whole-wing pieces are dry-rubbed in a sweet, Red Hot Riplet-style seasoning blend he calls "Love Rub." They are then smoked so that they soak up the deep cherry and oak wood flavor, fried to give them a crispy exterior, again coated in "Love Rub" and finished with tangy Alabama white barbecue sauce. The multi-step process results in a wing that is layered both in texture and flavor.

The Midwestern offers several thick-sliced toasts served with a simple petite gem salad, which can either serve as a meal or a sharable first course. For the smoked trout toast, Welch places the flaked fish atop a rich concoction of smoked egg yolks that are accented with preserved lemon, radish and dill. Together, the toppings form an egg salad so wonderful you'd think you were in a Jewish deli.

Burrata toast is no less spectacular. A thick slab of the creamy cheese the size of a paperback book is battered and fried like a gigantic mozzarella stick. When pierced, the crunchy exterior reveals molten contents that spill out over the toast, mingling with the accompanying pesto and tomato jam and becoming an ethereal, herbal cheese spread. It's a haute cheesy bread. So is the grilled cheese, which pairs fried green tomatoes, tomato jam and loads of pimento cheese, sandwiched between two slices of buttery sourdough. There is so much cheese and butter, they ooze out the sides with every bite, resulting in a beautiful mess that is the mark of a good sandwich.

If Big Baby Q introduced the city to Welch's barbecue genius, the Midwestern underscores it and adds an exclamation point. His St. Louis-style ribs, smoked competition style to give them appropriate chew and pull, taste of cherry-wood smoke, but it's not overwhelming or acerbic. Instead, it gently brings out the natural sweetness of the pork, to the point that reaching for sauce seems pointless.

Welch's turkey breast is shockingly juicy, its tender flesh encased in a ring of dry rub that gives it a gentle, yet noticeable, kick. Just as impressive is the turkey leg, a mammoth, Henry VIII-style poultry club suitable for clobbering your dining companion, were it not so tender. On the outside, the crispy skin has a gentle, chile-inspired warmth, amped up by piquant Alabama white sauce. Inside, the meat is fork-tender, pulling apart with the slightest prodding. If Friar Tuck's at Six Flags is your gold standard, you are missing out.

The burger is not the Midwestern's only good use of brisket. Welch's pastrami is otherworldly; thick-sliced and brined, the meat has an exotic backbeat of cinnamon and cardamom, and a charred exterior that rivals the best Texas barbecue. I preferred it to the regular brisket which, to this Texas brisket snob, was not sufficiently fatty or tender. I want to be able to butter my bread with it.

This is exactly what I could do with the beef ribs. Sating my desire for fatty brisket, this magnificent specimen of meat is nothing less than breathtaking. The beef is smoked and well-seasoned on the outside, forming an intensely flavored bark; underneath, luscious beef is so tender and marbled it jiggles when you shake the plate. The best part is when you get a little pocket of char that is equal parts meat and marbling that positively melts on the tongue like marrow. Welch only offers the beef ribs on the weekends, which means you can only eat them 104 times a year. So unfair! 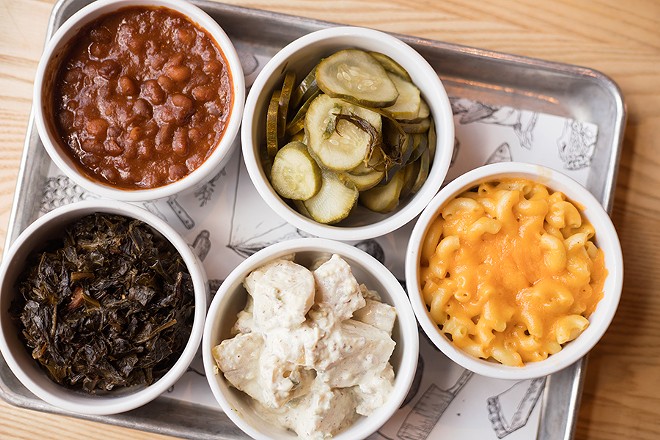 It's a common complaint that the sides you get at barbecue restaurants tend to be throwaways. This is not the case at the Midwestern. Standouts include pit beans that are brown sugary and enriched with meat drippings. Collard greens, seasoned with ham hocks, have a lovely sweetness and acid to them, and mac and cheese is rich and decadent, seasoned with enough black pepper to cut through the cream.

Saputo, whose genius drinks pair beautifully with Welch's food, went bourbon-heavy on the Midwestern's cocktail menu, with flawlessly executed classics. You may be getting an Old Fashioned, but it's the best Old Fashioned of your life; the same goes for the Manhattan. His skill lies in his ability to make these timeless drinks his own — adding, for instance, chamomile and allspice to a whiskey sour for a "Gateway Sour" — without fundamentally altering everything that makes them beloved. 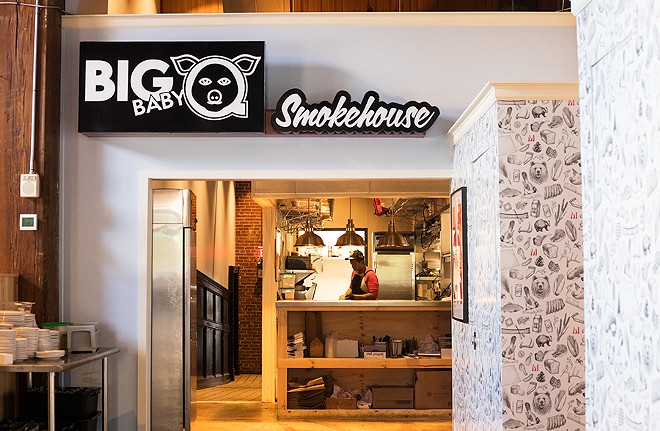 That all of this glory is served with outstanding hospitality and efficiency only adds to the Midwestern's success. On every occasion I've visited, service was not just prompt — which is essential because of the baseball crowd the place draws — but surprisingly friendly and accommodating. On one night, we rolled in with six hungry kids in tow; within minutes they had water and French fries without us even asking, and never once did our servers bat an eye at the demands of a bevy of frazzled parents.

Then again, our server could have smacked me across the face, and I'd still go back for that burger. I might not even notice the hit. Something so special makes everything else fade away.