The Mad Crab Is a Deliriously Good Time

When you walk into the Mad Crab, you'll notice some things are different. A few are obvious: There's butcher paper on the tables instead of cloths. People are eating with their plastic-gloved hands straight out of a bag, palming whole red potatoes and hunks of andouille sausage Henry VIII style. There are no plates, no flatware and the prevailing way to drink a beer seems to be out of a plastic cup with a straw.

It's a wild scene, yet there's something else at work that is so unique — so outside the norm of 21st-century dining — it takes a while even to register. And then, covered with seafood-infused butter up to your elbows, laughing with everyone at the table, you realize what's going on: No one is on their phones.

Nor would anyone want to be, even if they snuck away for a minute to wash their hands in one of the sinks that line the hallway on the way into the restroom. The atmosphere at the Mad Crab is positively electric, thanks to the loud, upbeat music and lively conversation that fill the air. On any given weekend night, this four-month-old University City restaurant is filled to the brim with parties of six, eight, ten people, throwing back buckets of beer and devouring shellfish like it's a backyard barbecue. Nautical-themed decor lines the wood-covered walls, televisions broadcast the game and rows of tables get pushed together to accommodate parties that are the size of family reunions (sometimes, in fact, they are). It's a party atmosphere, one you're better off experiencing in the moment than Instagramming for posterity. Besides, if you aren't aggressive, someone at the table might snag the last king crab leg. 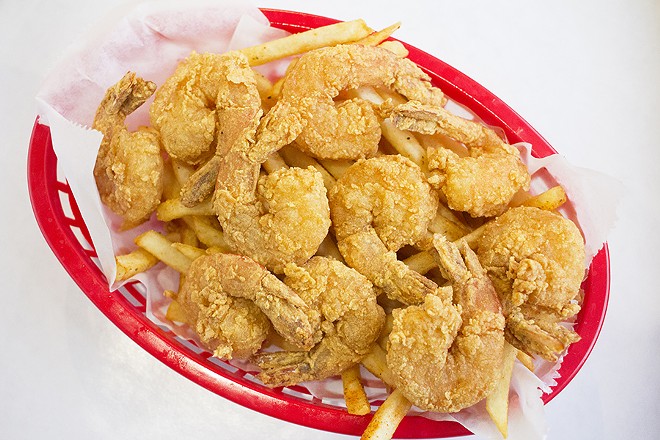 Owners Victor and Nam Ho were banking on such an enthusiastic response. The brothers, who made their living in the nail supply business, opened the Mad Crab in the former Kim Son Vietnamese Bistro in the heart of University City's Chinatown. Though a first-time restaurateur, Victor Ho recognized a winning idea after moving to Dallas and seeing the seafood boil restaurants that had sprung up around town. The brothers hired a restaurant consultant to help them iron out the details for a St. Louis version and got to work turning the former Vietnamese restaurant into a little slice of the bayou.

The concept is simple and straightforward: Think of the Mad Crab as the Chipotle of seafood feasts. You can go the à la carte route, choosing from a selection of seafood such as crawfish, shrimp or lobster, or get a combination seafood boil, which includes potatoes, sausage and corn. All styles are dressed in one of four sauces and spiced on a four-point scale, ranging from mild to "I Can't Feel My Mouth." However you customize, your meal will come out in a clear plastic bag with some gloves, a few shellcrackers and some forks. 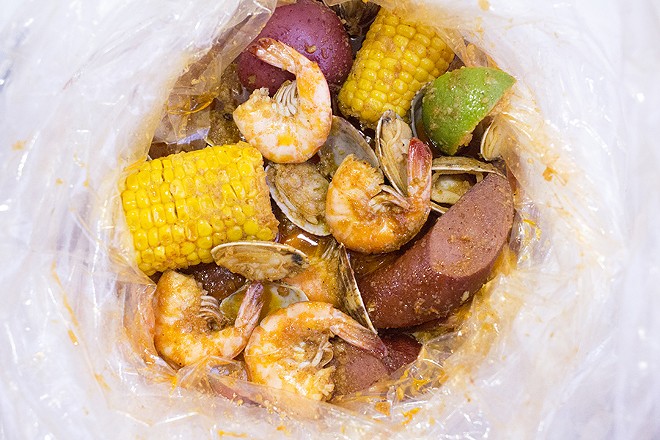 If you're a purist, the à la carte crawfish in seasoned "Rajun' Cajun" butter is a good start. The shellfish are on the larger side and served steaming hot — pull them apart and the meat and juices pool out, mingling with the seasoned butter to form an earthy jus. Ordered at a level three on the four-point scale, we found the spice level was still tolerable. Garlic, not chile or Cajun seasoning, is the predominant flavor, so if you want heat, order the hottest level and figure out a way to grab the table's hot sauce, too.

Shrimp, tossed in the mild lemon pepper sauce, is succulent and tender, showing off just how well the kitchen can prepare seafood. The buttery, black pepper-flecked jus allows the shrimp's flavor to shine through. Massive green mussels also benefit from the simple lemon pepper preparation, though the hearty garlic sauce — which is more of a puree — serves as a rich, piquant condiment. 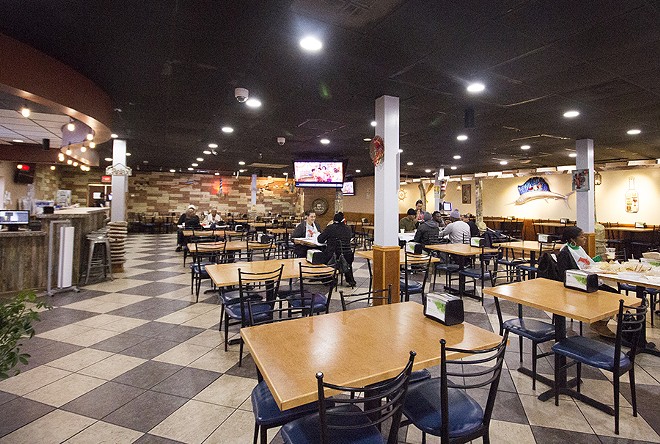 For the full Mad Crab experience, though, the combination boils are the way to go. If the price tag gives you sticker shock (priced at $41, $64 and $77 depending on what seafood you choose), consider that one combo at the mid-range price point gave our table of four adults enough leftovers to make two additional meals.

What you pay for these feasts in a bag, called "Mad Combos," is determined by their size and what type of seafood you choose. At the lowest tier, you choose three standard items from options including shrimp, crawfish and mussels. One tier up includes one premium item (like lobster or crab) plus two standard selections. At the highest level, you get one premium plus three standard items.

On both occasions, we selected the mid-tier boil, called the "Angry Combo." One night, we opted for mussels, shrimp and one-and-a-half pounds of king crab legs; on another, we chose two good-sized lobster tails, crawfish and shrimp. For both, we chose a sauce option called "the Whole Shabang," a mixture of all the other varieties ("Rajun' Cajun," lemon pepper and garlic), which makes for a buttery seasoned concoction with so much garlic it almost forms a delicious paste. We barely broke a sweat at the medium spice level, not that we would have noticed much if we had. We were too busy reveling in the joy of our butter-drenched (albeit a rather salty one) feast that involved dipping every last thing we could find into the seasoned nectar. Even the French fries that came with my daughter's chicken tenders basket weren't safe, though the real joy came from sopping up that sauce with French bread garlic toast. Yes, we were dipping buttered bread into butter. That's the sort of debauched behavior the Mad Crab induces.

Outside of the seafood boils, the Mad Crab offers few other options, and those they do serve aren't nearly as riveting. Chicken wings, prepared with the Cajun seasoning, are nothing beyond standard bar food, and, sadly, the gumbo was a bland miss that lacked any of the warm spices typically associated with the dish. Skip these distractions and just order some extra potatoes and sausage for your seafood boil. The former are perfectly cooked red potatoes that let you use the sauce like gravy; the latter is a plump, mild andouille that adds a savory bit of pork fat to the already decadent mix.

There is no dessert to speak of at the Mad Crab, not that you'd want for anything after such a decadent meal. An ice-cold Corona is the only palate cleanser you'll need — and even that pales in comparison to the refreshment you get from the packet of wet naps your server gives you to following your meal.

You'll need about three of them before you feel like you can reach for your phone again — not that you'll miss it. The Mad Crab is such a deliriously good time you won't even realize you haven't been checking it. You'll be having way too much fun to care.