The Legend of Allen Barklage

He was a daredevil, a savior and a man who cheated death. But it was the life he took that made him famous

ILLUSTRATION BY EVAN SULT, BASED ON A PHOTO BY ALLEN BARKLAGE 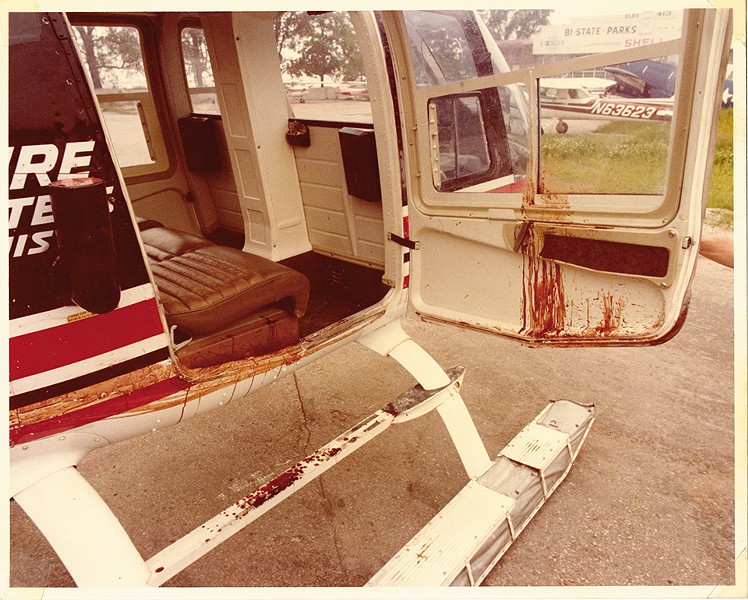 The hijacking changed Barklage's life. For months, reporters breathlessly followed the action as the defendants prepared for trial, interviewing Trapnell through several hunger strikes, describing his frivolous lawsuits and the announcement of his presidential campaign conducted behind bars.

But while the headlines proclaimed Barklage a hero pilot, he was a mess at home. His wife filed for divorce.

His younger brother, Richard, eventually set him up on a date with a mutual friend, Chris. She had secretly harbored a crush on the pilot after meeting him several months before. The two quickly bonded, and soon, Allen and Chris were a couple.

She wasn't intimidated by his fame. "He didn't act like a celebrity," she says. (She remarried after Barklage's death and is now Chris Berry.) For one thing, she says, he dressed "like a hoosier." She says she threw away most of his clothes after they got married in 1980.

"He was caring," she recalls. "He had a good heart, and Allen was totally fearless. I don't think there was anything he was afraid of."

In December 1978, the two were on a date when Barklage got a message on his pager. It was the FBI.

About 100 miles away, in a federal courthouse in Benton, Illinois, a jury was listening to a prosecutor's final arguments against Trapnell and his accomplice McNally. Trapnell had chosen to represent himself, a decision that put him at a distinct disadvantage in legal expertise, but did grant him one key privilege: the opportunity to interview defense witnesses. Among them was seventeen-year-old Robyn Oswald.

Robyn was a Clayton High School cheerleader who shared her mother's wavy blonde hair and decisive streak. Before her mother's death, Robyn had accompanied her on visits to Trapnell, forming a bond that grew stronger in grief. In Robyn's mind, they had become a family. A "father figure," as some news reports put it.

Years later, Robyn would tell a TV documentary crew that Trapnell was "a selfish human being."

"Trapnell was really good at being creative," she recounted to FBI: The Untold Stories. "[He made] you visualize things, like a big beautiful home, all the clothes a sixteen-year-old could want, the Jeep that I wanted ... He said he'd wrap a big red ribbon around the engine and put a rose on the steering wheel as my birthday present."

It may have gone further than even that. McNally claims that Trapnell bragged about obtaining topless photos of the teen. In a story in the St. Louis Times, a purported high school friend said, "Trapnell attracted her more as a lover."

Trapnell didn't hesitate to use the teen just as he'd used her mother.

On the morning Trapnell faced a possible jury verdict on charges of hijacking and kidnapping, Robyn boarded a TWA flight in St. Louis. Five minutes before landing in Kansas City, she asked her neighbor to signal for a stewardess.

Beneath a shapeless cardigan and scarf, Oswald revealed what looked like three sticks of dynamite strapped to her body. She demanded the release of Garrett Trapnell.

The plane was diverted to Marion, where a standoff began that would stretch into the night. The teen had more than 80 hostages under her control.

But the hijacking only shut down court proceedings temporarily. The judge ordered the jury sequestered and then sealed the courtroom from reporters. Trapnell and McNally were moved to a cell to wait out the crisis.

That's when the FBI started making calls. An agent tracked down MR in Oregon, where she'd retreated in the aftermath of her mother's death. The agent pressed her: She was Robyn's big sister. Robyn would listen to her.

But MR turned the FBI down. "I can't do it. I'm done," she told the agent. The crisis of her mother's death and her sister's hijacking was too much to bear. "I just couldn't be involved and survive myself."

As for Barklage, when he got paged at dinner with the news, he assumed the girl wanted revenge. Berry says he immediately offered himself as a bargaining chip.

"Tell her, if she wants me, she can let the people go and she can have me," Berry recalls him saying.

Robyn Oswald, however, demanded only the release of Trapnell. And unlike her mother, the teen wasn't armed. The sticks of dynamite were road flares, the "detonator" made from harmless items purchased at a hardware store.

Over the next hours, dozens of passengers managed to sneak off the plane as Robyn repeatedly called the FBI for updates on Trapnell. One hostage later described her to a reporter a "calm, cool and collected doll." Another claimed Robyn had quipped to a stewardess, "Aren't I the nicest hijacker?"

But the hours wore on the teen. At one point, a witness later claimed Robyn announced that if Trapnell was not on the plane in half an hour, "All 72 people [left on the plane] are going to be blown from the face of the earth."

The FBI called her bluff. Thirty minutes came and went. Hostages crept away in greater numbers. Finally, after ten hours, Robyn Oswald surrendered to the FBI.

From there, she seemingly disappeared into the juvenile justice system. MR, who is estranged from her siblings, believes Robyn is currently living in St. Louis along with her children and grandchildren.

Berry says she watched her new husband struggle to handle the wave of coverage over the second hijacking, the wall-to-wall stories of a daughter's anguish and vivid retellings of Barklage's actions inside the helicopter.

She recalls him complaining about the reporters.

But the papers never printed that. The ink had already dried on the legend.

For the next twenty years, St. Louis' skies belonged to Allen Barklage.

As many as 30 times per day, commuters listened to his voice, and each year at Christmas, he landed Santa in Tilles Park. He'd show up at car dealerships and charity events, even grade schools, swooping a Jet Ranger onto a field in front of crowds of awestruck kids.

"He was well known everywhere, wherever radio reached in the St. Louis area. And people talked about him like they knew him," says Larry Barklage. For years, he endured the ritual of strangers invariably remarking on his last name, "Oh, you're Allen's brother?"

"Allen loved that part of it," Larry says. "He loved the celebrity of it."

The public seemed to love him back. In the age before cable, TV networks and radio stations owned the media market. By the early 1980s, competition between the various outlets meant that as many as five helicopters were trying to observe the same city traffic.

When his helicopter had an open seat, Barklage was known to indulge friends on a trip he called the River Run. Traffic reporter and on-air personality Paul Ford, who goes by "Captain Mac" on 92.3 (WIL-FM), remembers Barklage had a different name for it: the Vietnam Flashback Tour.

According to Ford, Barklage would push the engine to its max, roaring down the Missouri River with just a few feet of clearance between the helicopter and the blur of water below. Then, without notice, Barklage would climb the aircraft to 300 feet.

"He would stall," Ford says, "So you'd be weightless for a bit. Then he would take back control of the stick and get it under control."

On another occasion, when Barklage was apparently feeling "more ornery than usual," Ford recalls the pilot pushing the helicopter to 100 mph flying north on the Mississippi. In front of them lay the old Chain of Rocks Bridge.

"If we don't pull up we're going to go right under that bridge," Ford warned his colleague. Barklage did not pull up.

Rumor holds that the pilot once touched his helicopter's skids to the top of the Gateway Arch. To this day, the tale remains unsubstantiated, but it seems entirely plausible.

Barklage regularly abandoned his traffic assignments at even the barest hint of something more interesting. One day in 1998, flying over the Mississippi, Barklage got a call from a station employee monitoring the police channel: there was an empty boat drifting in the middle of the river. Its two passengers were now stranded in the water, and only one of them had on a life jacket. The other held onto a piece of wood.

Ford remembers Barklage getting his attention in the back seat. "I'm going to let you out," Barklage said.

Ford didn't argue, and Barklage dropped him off on a sand bar and zoomed away. KMOX's Joe Sonderman, who was still inside, watched as Barklage hovered the chopper over the water. Then Sonderman felt the aircraft tip on its side, further than he'd ever felt it tip before.

It took a moment to realize what Barklage was doing.

"The thing was acting like a big giant fan, you could see it was creating a wake." Sonderman says — the rotors blew the stranded swimmers to shore while Sonderman hung perilously by his seatbelt. "All I could think about was, 'Jesus Christ, what if this seat belt lets loose?'" It didn't.

Barklage's instincts got him through multiple close calls, including a takeoff on a TV news chopper that literally ripped the machine apart, throwing metal and rotor pieces around the airfield and nearly killing Barklage and a co-pilot. Another time, someone on the ground shot a bullet through the side of the helicopter. Barklage laughed it off.

"He was bulletproof," Sonderman says now. "You couldn't imagine him dying."