MABEL SUEN A selection of dishes from The Last Kitchen (pictured from left to right, top to bottom): pork chop sandwich, Grown Up Garlic Noodles and Salsiccia pizza.

The Last Hotel is a stunning architectural gem, a fact that strikes you the moment you step inside from Washington Avenue and are immersed in its Art Deco time capsule of a lobby. Ivory columns, adorned with intricate carvings, support the soaring ceilings, and luxe details — cognac leather sofas, a gorgeous pool table and shiny marble floors — create a swanky scene, the capstone of which is the massive, vintage bar that is the lobby's centerpiece. It begs to be surrounded by sequin and faux fur-clad guests, and on a particular Saturday, it was so overflowing with bedazzled patrons, you'd have mistaken it for the set of a Jazz Age film. 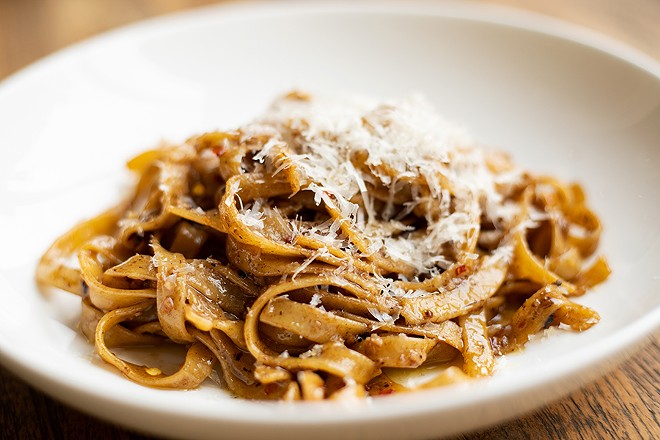 All of this was irrelevant, however, as I sat, tucked into a corner of the hotel's restaurant, the Last Kitchen, completely spellbound by the Grown Up Garlic Noodles. In fact, the ghosts of F. Scott and Zelda themselves could have floated into the room that evening and I wouldn't have noticed over the oil-slicked pasta, laden with tiny jewels of fermented black garlic rendered so sweet by the aging process, they may as well be candy. The garlic infuses the entire dish with a sweet, umami funk that is punctuated by flecks of heat from chile flakes. A dusting of freshly grated Parmesan cheese adds richness and thickens the oil-garlic sauce. It's positively haunting.

That a simple dish of pasta steals the show in the midst of the boutique hotel's stunning beauty speaks to the talent of the Last Kitchen's chef, Evy Swoboda. A rising star in the city's culinary scene, Swoboda was working as chef de cuisine at Gerard Craft's Pastaria when she was tapped to be real estate developer Tim Dixon's St. Louis culinary ambassador. Dixon was looking to develop the old International Shoe Company Building on Washington Avenue and Swoboda reached out to him because of their mutual Milwaukee connection (her family lives in Milwaukee; Dixon is based there). Before she knew it, she was showing Dixon and his team around town and introducing them to the city's history and culture.

Dixon and Swoboda clicked, and when he offered her the chance to not only be executive chef at his forthcoming property, but to also help him develop the hotel and restaurant from the ground up, she knew it was an opportunity she had to take. As they collaborated, the building's concept came together: It would be called the Last Hotel, a reference to a cobbler's last as a nod to the property's history; it would have a stunning rooftop and it would deviate from the standard hotel model. In fact, Dixon and Swoboda did not want the Last Hotel to be thought of as a hotel at all; to them, it is a restaurant with rooms.

With such a strong culinary focus as the Last Hotel's stated mission, Swoboda wanted a definitive thread to bind together the Last Kitchen's menu and ensure it transcended the notion of a basic hotel restaurant. She found that in the Mississippi River, creating dishes that serve as an exploration of the many different food cultures along the great waterway, from its northernmost headwaters to its southern mouth. For roughly a year, Swoboda traveled along the Mississippi, from Minneapolis to New Orleans, cooking with chefs along the way and learning all that she could about the river cities' similarities and differences. 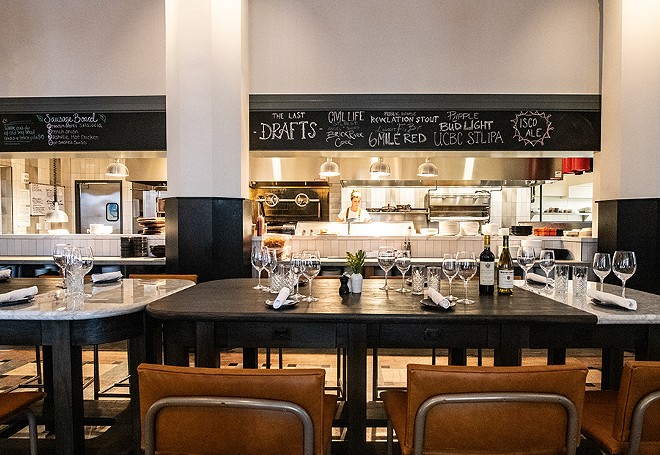 It's debatable whether that sort of high concept actually binds together the menu. What's not up for argument is this: The Last Kitchen is an outstanding restaurant, one that not only transcends the "hotel restaurant" norm but stands as one of the city's most exciting new places to dine, period. You need not taste anything but the Grown Up Garlic Noodles to figure this out, but if you stop there, you'll miss out on another superstar pasta dish, the beef ragu. As with the garlic noodles, Swoboda draws upon her experience at Pastaria to create this Italian-inflected standout. Braised beef cheek is so tender, you could spread it over a piece of crusty bread. Instead, Swoboda uses the pull-apart meat and its cooking juices as a sauce for pillow-soft gnocchi sardi (a Sardinian wheat-based pasta), then accents the noodles with briny castelvetrano olives and mint to balance out the richness. It's masterful.

Of course, the Last Kitchen is not Pastaria Part Two, and Swoboda shows she can do much more than Italian cuisine. Starters like scallops, flawlessly seared and paired with a carrot puree, are enlivened with toasted coriander, chile oil and shishito-infused vinegar that balance out the shellfish's buttery mouthfeel. She also shows this penchant for balance on the goat cheese tart, in which the rich, quiche-like dish is paired with earthy beets, balsamic and pickled mustard seeds.

Even dishes that, on the surface, seem like mere bar food are revelatory. Taking both St. Louis and New Orleans as its inspiration, the boudin ravioli is the Last Kitchen's signature appetizer, and with good reason. The massive, breaded pasta squares are perfectly cooked — crispy on the outside with a layer of chew underneath. The filling is outstanding, a hearty blend of wild boar and rice sausage that makes you wonder why anyone chooses to use the pasty ground beef that's come to define T-rav filling. In place of marinara, Swoboda pairs the ravioli with Comeback Sauce, a zesty, mayonnaise-based ketchup and chile condiment that pairs beautifully with the boar.

The Buffalou Chicken Bites, the Last Kitchen's riff on boneless Buffalo wings, are just as wonderful as the ravioli. For this outstanding finger food, Swoboda brines white and dark meat chicken in buttermilk, smokes the meat and then lightly dusts the pieces in a delicate coating of breading before dunking them in the fryer and coating them in hot sauce. Dill pickle aioli is a bright, briny complement to the bites' salt, smoke and spice. 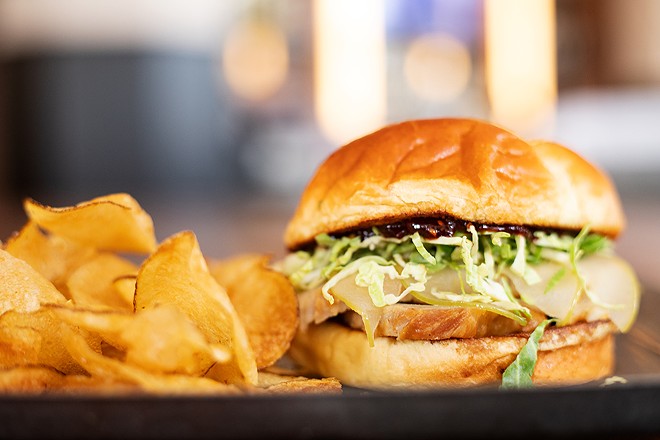 The Last Kitchen offers a handful of sandwiches, available all day on its bar menu. A pork chop sandwich paired thick slices of the meat with a tart raspberry barbecue sauce, pickled green apples and shaved Brussels sprouts, all tucked into a pillow-soft bun. Flavor-wise, the bright sauce and accoutrements worked well with the pork, but the meat itself was dry. The classic cheeseburger was better executed. Perfectly cooked to a juicy pink medium, the burger is coated in gooey Provel cheese, an excellent melter that, to this proud St. Louisan, should be added into the pantheon of great burger cheeses.

The Last Kitchen is equally adept at providing an elegant dinner experience. A roasted half-chicken, succulent and flecked with herbs, is served atop a bed of creamy wild rice that evokes risotto and preserved lemon-dressed kale that provides a mouth-puckering jolt to the entire dish. I only wished that the skin was crispier and more golden. Instead, it was a bit flaccid. 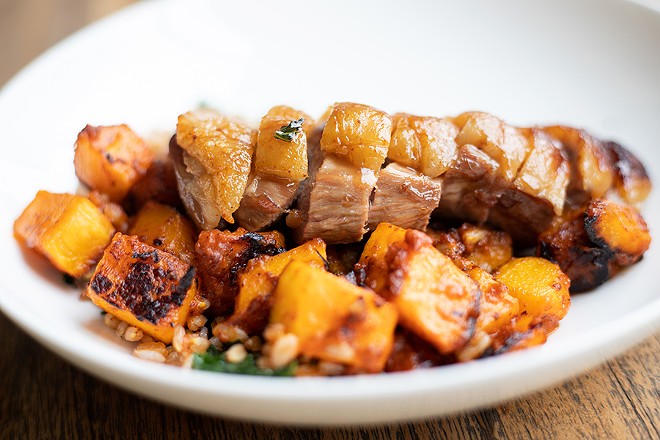 The duck breast skin, on the other hand, was a master class in technique. The duck's crunchy exterior was perfectly roasted like a crackling, encasing layers of buttery fat and juicy meat. The kitchen slices the duck breast into medallions, then gilds the meat with brown butter; together, the butter and duck's natural jus form a glorious concoction that soaks into the accompanying barley.

And that's not even my favorite duck dish on the menu. That honor goes to the duck pot pie with its al dente roasted vegetables, silken gravy and hunks of duck meat that combine to form the sort of stick-to-your-ribs comfort called for on these dreary, late autumn days. As good as the filling is, though, the star of the dish is the puff pastry, which is simultaneously rich and delicate — it's as if Swoboda and company have figured out a way to crisp pure butter.

Those pastry skills, courtesy of the restaurant's immensely talented pastry chef, Suji Grant, are on display in the Last Kitchen's desserts. An apple cobbler topped with crumbly, buttery streusel and tangy mascarpone whipped cream is perfection of the form, as is the pumpkin cheesecake, which is adorned with candied pecans so delicious, they should consider bagging them up and selling them in their own right. However, the outstanding Suji's Candy Bar is the must-try dessert, not only because it's such a fun, whimsical dish but because its layers of farro sable, devil's food cake and chocolate whipped cream somehow reveal themselves as both a cohesive flavor and individual components as they melt on the tongue. 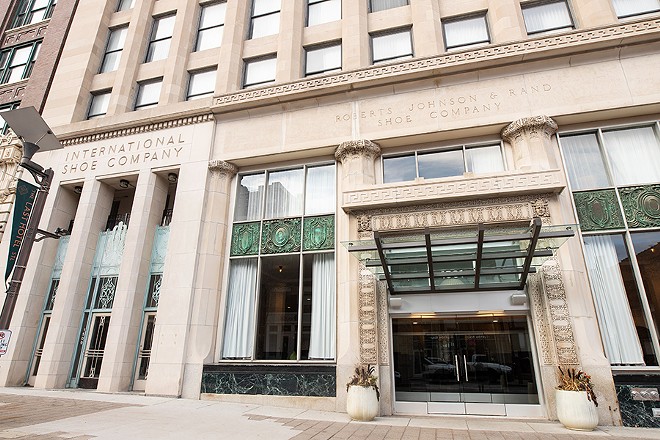 What Grant does with that candy bar — and what Swoboda does with the garlic noodles and the duck breast — is nothing short of magic. Of course, the real magic Swoboda has pulled off is making a restaurant inside a hotel anything but a hotel restaurant. With such wonderful food, it's easy to forget where you are, even if where you are is magnificent.