The LaBute Festival Is Back, and Better Than Ever

PATRICK HUBER Kelly Schaschl, left, is at the center of a story in "Percentage America."

Presented by St. Louis Actors' Studio through July 30 at the Gaslight Theater (358 North Boyle Avenue; www.stlas.org). Tickets are $30 to $35.

I look forward to the LaBute New Theater Festival every year. It promises new plays, great actors and an eager, attentive audience of people there not only to be entertained, but challenged as well. The festival format's shorter running time forces writers to hone their works to the bone. Plays move fast, hit hard and get out.

"Hate Crime" opens with two men (Chauncy Thomas and Greg Hunsaker) meeting in a hotel room. An argument ensues about whether Thomas has lost his key, and then another follows about the requirements for a pastry to be considered a Danish. The reason for their prickliness becomes clear: They're plotting to kill Thomas' fiance so the two schemers can be together. Hunsaker's character will do the dirty work, and as they discuss the details of their plan Hunsaker gets a dreamy look and flexes his hands, imagining the murder with somber delight.

There is something about the removed nature of Thomas' performance that suggests he may be planning to doublecross his lover. It's the distance he keeps, and the cold way he watches as Hunsaker sinks into his bloody reverie. Maybe that distance is because he cannot allow any physical evidence of Hunsaker on his person; maybe not. 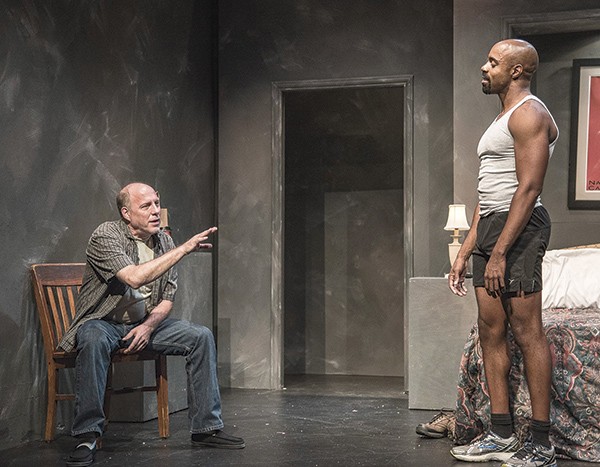 On opening night the ending came with such suddenness that no one clapped; I (and I suspect many others) believed there would be more coming. Not that it needed more. LaBute's economical scenario and director John Pierson's delicate staging gave us everything we needed to predict the outcome of the plan, although no two people might agree on its success.

"Waiting for the Erie Lackawanna" also opens with a dispute, and is also directed by Pierson. Ryan Lawson-Maeske stands between Spencer Sickmann and Reginald Pierre on a train platform, all three garbed in similar dark suits and carrying identical briefcases. Lawson-Maeske's co-stars both tower over him, and they stand annoyingly too closely. An innocent bump from one sets off a circular fight that is driven by the madcap antics of Sickmann and the unsettling way Pierre calmly warns Lawson-Maeske about what Sickmann's character will do next. All the while Sickmann and Pierre stealthily replace Lawson-Maeske's briefcase with their own.

All three make excellent work of Ron Radice's script, which is comic in a delightfully broad fashion. Lawson-Maeske stands out for the stunned fear he displays when he finally opens "his" briefcase. He looks like a man who has just seen his world go up in smoke.

"Sacred Space" is directed by Nancy Bell, and is about two Jewish women (Sophia Brown and Kim Furlow) who ritually bathe and pray over a dead body to help the soul ascend. Both women are shaken by the morning news, which is all about the Pulse Nightclub massacre that claimed the lives of 57 LGBT people. They are required by tradition to think only holy thoughts while they work, which is impossible for Furlow when text messages from one of the victims hang in the air before her eyes (and projected on the back wall for the audience). Brown sees them as well but resists distraction, at least for a while.

What starts promisingly with magical realism becomes emotionally manipulative. Any play about a national tragedy is on some level exploiting the event for drama. Playwright Barbara Blumenthal-Ehrlich leans into that, giving Furlow a flat and didactic speech and having Brown offer only token resistance. The final reading of all 57 names is emotional, but not for anything the playwright has given us.

Carter W. Lewis' "Percentage America" finishes the night on a high note, however. Nancy Brown and Chauncy Thomas are on a first date, and neither is what the other was promised by their dating profile. Both agree to tell the truth about themselves, which they discover is a turn on. Their lust for truth leads the two to pick a story on the evening news and attempt to winnow out the broadcaster's built-in bias and editorializing until they have a demonstrably factual report.

What follows is absurdity. They call in favors, research sources and question witnesses, doggedly increasing the percentage of truth. It's foreplay, but it's also a smart commentary on our new and terrifying regime of alt-facts and fake news. The closer they get to 100 percent truth, the more doubts they have about what they're doing. Somewhere near the end it dawns on them (and us): The government is lying to us, the media is complicit and President Circus Peanut is capable of keeping only one promise he made, and it ain't that damn wall.

Bell and Thomas are fantastic together, and high schooler Kelly Schaschl delivers an impressively mature performance portraying various newscasters and secondary characters. Lewis' script is a marvel of dropped hints and sharp dialogue, and director Pierson drives the pace until it snaps with dull finality. "Percentage America" is funny, real and horrifying, and it's one of the best shows the LaBute Fest has ever mounted.