The King Searches for Elvis But Finds America

DAVID KUHN, COURTESY OF OSCILLOSCOPE LABORATORIES Robert Bradley (left) and Matthew J. Ruffino share their opinions on the meaning and music of Elvis.

Eugene Jarecki's The King is about the life and legacy of Elvis Presley. It's a biography in the form of a road trip, Jarecki cruising in Elvis' own 1963 Rolls-Royce from Tupelo to Memphis to Nashville to Las Vegas (with pit stops in Germany and New York), revisiting the stations of the King. He lets a few guests climb in the back seat from time to time, an assortment of musicians, cultural critics, journalists, celebrities and regular fans. It's a diverse bunch that includes Peter Guralnick, whose two-volume biography of Elvis is essential reading not just for fans but for anyone interested in American culture in the second half of the twentieth century, and Chuck D, whose 1989 hit with Public Enemy, "Fight the Power," left no doubt about his dismissive opinion of the King. The guest list (James Carville, Alec Baldwin, Dan Rather, Rosanne Cash, Ashton Kutcher) is wide enough to open the film to a larger discussion of American culture, which is Jarecki's intent, and to reveal the breadth of our collective obsession with Elvis. These people know the songs, the stories, the minute details of his life.

Ethan Hawke claims to have been dismissive of Elvis in his youth but is clearly awe-struck. Canadian Mike Myers offers a witty alternative perspective on how Presley's unmistakably Southern persona was seen by our neighbors to the north. Van Jones challenges Jarecki for glorifying Elvis, while songwriter John Hiatt is moved to tears the instant he climbs into the Rolls, seeing it as a symbol of the singer's lack of authority over his life and his fame. Mojo Nixon had it right: Elvis is everywhere.

He's also the kindling for a rapid succession of ideas and arguments as the film expands and unwinds his story. Jarecki explores class issues in the struggling town of Tupelo, where young Presley lived in less-than-glamorous surroundings and which today barely survives on Elvis-related tourism. He also hears arguments for and against the oft-made accusations of cultural appropriation, listens to the gospel, blues and country music that Elvis helped blend into rock-and-roll, and even learns how to cook fried peanut-butter-and-banana sandwiches.

Elvis' life is just one element in a collage of sounds and images, film clips and interviews, yet the real Elvis, the kid who rose from being dirt-poor to ridiculously self-conscious fame and fortune, remains oddly distant. The audio Jarecki uses of old interviews sounds almost like spirit messages slipping through the ether.

If Elvis the cultural signifier is still very much with us as an American success story (Jarecki shows Andy Warhol's Triple Elvis being auctioned in 2014 for $82 million), the biographical Elvis is seen more as an almost inevitable tragedy. For Jarecki, Presley's problem began when he fell under the management of the notorious Colonel Tom Parker, a hustler whose relationship with Elvis is compared to that of Carl Denham and King Kong. The comparison (both are pulled from the wild, branded as King and turned into show-biz spectacles) may be a bit forced but gives a small sense of how ill-equipped Presley was to handle his success. By his final years — from the '68 comeback to the Vegas residency to the final, embarrassing performances, loaded with prescription drugs and bursting the seams of his white jumpsuit — he had become a victim of fame: excessive, sentimental, self-destructive and out of control. He started out as James Dean and ended as a white-trash Gatsby. 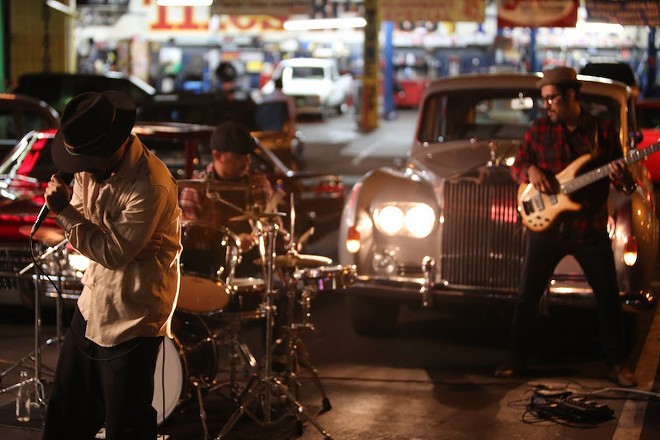 If Signifying Elvis has outlived its creator (with no end in sight: Elvis died at 42, and 41 years later his estate continues to make millions), it's because he's big enough to absorb almost any meaning you want to throw at him. He's rich, he's poor; he's the hills of Mississippi, he's the neon of Vegas; he's an outlaw, he's a would-be cop.

Jarecki doesn't push any single interpretation. In a final montage sequence showing events from the decades following Elvis' death, he seems to be opening up his film to whatever connection the viewer wants to make.If Elvis is America, Jarecki and many of his passengers are skeptical about what his country has become. It is a sign of our troubled times that almost every non-fiction film of the last sixteen months, whether dealing with Hulk Hogan's battle with Gawker (Nobody Speak) or a much-loved Supreme Court justice (RBG), has been haunted by the uneasy presence of the Voldemort of Pennsylvania Avenue.

The King, which was mostly filmed in 2016 and uses the election in counterpoint to Elvis' story, is no exception. Jarecki's subject may be the king of rock-and-roll, but it can't escape the shadow of the Monster of Mar-a-Lago.