The How and the Why Explores Women and Science

The How and the Why

Written by Sarah Treem. Directed by Nancy Bell. Presented by New Jewish Theatre through February 11 in the Wool Studio Theatre at the Jewish Community Center (2 Millstone Drive; www.newjewishtheatre.org). Tickets are $41 to $44.

What do women discuss when there are no men present? Sarah Treem's two-character drama The How and the Why pulls back the curtain on the gory, savage truth about "girl talk." And the short version is that men are not equipped to be part of the conversation — our constitutions are just too delicate.

Currently on stage at the New Jewish Theatre, The How and the Way is a tense affair. Zelda Kahn (Amy Loui) and Rachel Hardeman (Sophia Brown) begin each of their two meetings off-balance, and then push each other until one topples over. Maybe it's because I'm biologically male, but each time a combatant crumbled, I was surprised by who was left standing; perhaps women could see the fissures forming far earlier. It's not who falls that matters, though. It is their difficult, fractious relationship that takes center stage, and watching the two break it and reforge it over the course of 85 minutes is fascinating. The title refers to a biologist's mission to discover not just how our bodies function, but why these functions happen, evolutionarily speaking. The how and why of Zelda and Rachel's relationship is that one couldn't exist without the other, but neither can they exist together. But all is not lost: They can respect one another as people and scientists, which in their world, is as precious as it is rare.

Zelda is an established evolutionary biologist who developed a theory that revolutionized her field. Rachel is younger and working toward making her mark in the evolutionary biology game. To that end, she's arranged a meeting with Zelda in hopes of duping the older woman into getting her a presentation slot in an impending conference (Zelda's a member of the selection board).

Things go badly from the beginning. Zelda is clearly more excited about meeting Rachel than the other way around, and Rachel seems set on confounding her host's every expectation. Chit-chat is a minefield when Rachel is involved; a conversation about the office's decor somehow becomes a snub, and when Zelda tries to switch to the more neutral topic of Rachel's research, Rachel coldly informs her that her work is "not neutral. Not to me." 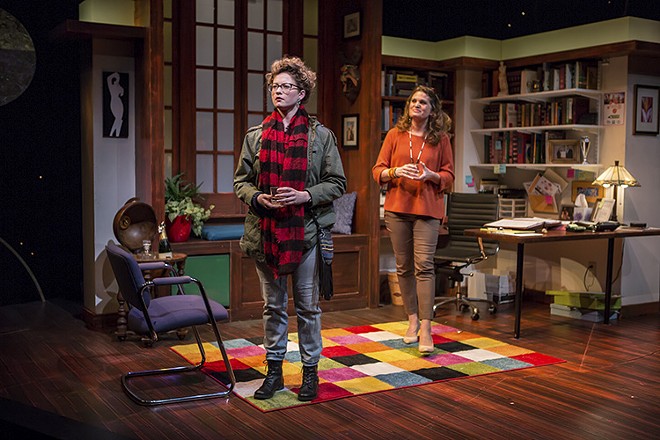 The source of all of this tension is a turning point in the plot, and better discovered than revealed here. But rest assured, it's not because either women is frigid or a "bitch." During the course of Rachel and Zelda's two conversations, it's clear that both women are highly intelligent, principled and competitive — and all of that feeds their conflict. Women are thin on the ground in evolutionary biology labs, which has fueled a paranoia in Rachel that Zelda left behind long ago. From her secure position, Zelda wishes to help Rachel. Rachel is not sure she wants that help — at least, not from Zelda.

And sometimes the distance between them closes. Rachel's radical new theory about the purpose of menstruation receives an enthusiastic response from Zelda, even though it would discredit Zelda's own career-making theory. They excitedly discuss the known science of menstruation, what Rachel's theory gets right and what is possibly wrong. But even when they're rapturously lost in theory and methodology, they suddenly bump into one another and realize how alien the other is.

Zelda came of age in the free-wheeling '70s. She doesn't care if rivals tell their students she slept her way to stardom, or if they don't even teach her theory — "Theories are mortal, just like their creators," she assures Rachel. A true Darwinian, Zelda expects to rise as high as she can and then be destroyed (ideologically speaking) by a young contender — someone like Rachel would do nicely.

Rachel thinks supremacy matters, but can take neither criticism nor effusive praise. She's prone to panic attacks, denounces Zelda's feminism and, while she doesn't believe in marriage, wants a happy home life with a man and children — after massive success, of course.

Treem's script reveals their conflicts slowly, sometimes by hint more than outright expression. Director Nancy Bell underlines these clues with physical action. While Rachel cries after a setback, Zelda stretches forth a timorous hand to comfort her, but withdraws it before Rachel notices. Zelda argues that Rachel is foolish to share credit for her work, using the language of parenthood: "Don't give it away, it's yours! Keep it! Own it! Take care of it!" If they were men, someone would get punched here; because they are women, they file this advice away to wield it like a dagger in a later conversation. Biology is ruthless.