The House with a Clock in Its Walls Is Surprisingly Captivating

The House with a Clock in Its Walls

Wait, the house with a what? With a clock in its walls? Don't most houses have clocks in the walls? OK, maybe on their walls, but still ... a house with a clock in its walls doesn't sound terribly weird or frightening or anything that The House with a Clock in Its Walls would appear to want to be. But this movie is based on the acclaimed-at-the-time 1973 young-adult novel by John Bellairs, and it's very plain that someone in Hollywood demanded, "Get me the next Harry Potter!" Probably Hollywood figured that retaining the name of the book was a good idea. But what sort of name recognition does this series — which (checks Wikipedia) runs to twelve books — have, anyway? Not much. And the title also kinda fails as movie marketing. A name change might have been a good idea.

And I say that because dang if an order to find the next Harry Potter for movies didn't pretty much succeed. This charming little flick offers genuinely appropriate entry-level spookiness for budding fright fans and plenty of pleasingly fun Halloween-y scares. I mean, if you want to get kids into horror without freaking them out too much, this would be a good movie to show them. I fear the blah title will put people off, and it shouldn't, because we really do need more good movies for kids these days. There are so few.

Anyway, in the grand tradition of these sorts of stories (including Harry Potter), tween Lewis Barnavelt (Owen Vaccaro) is an orphan who has newly lost his parents, and so he is shuffled off to live with the, um, unconventional uncle he has never even met before. We are introduced to Lewis as he arrives by bus in 1950s Michigan for his very first encounter with Jonathan Barnavelt, who is Jack Black at his most disarmingly goofy (this is rare). 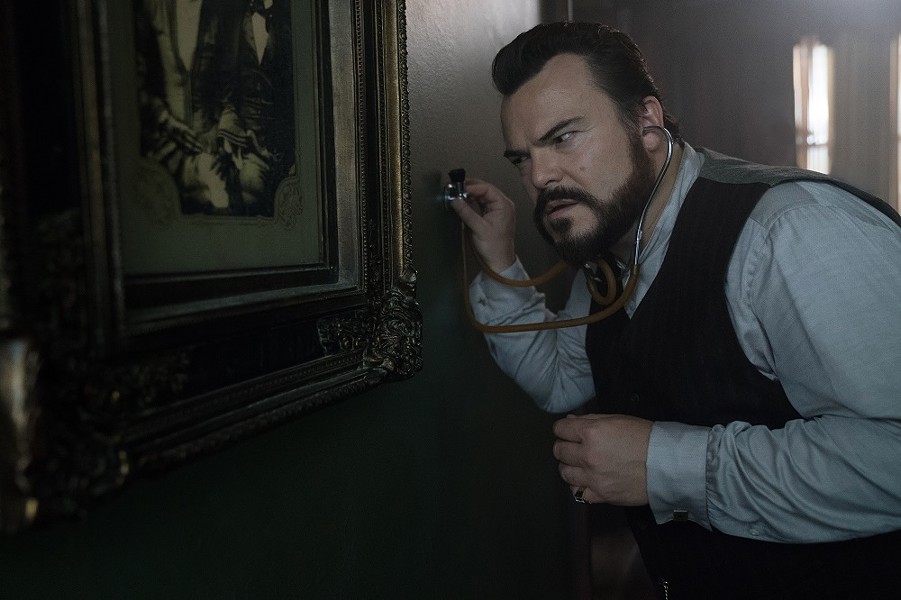 Uncle Jonathan lives in a haunted house, and has the most amazing neighbor/best friend in Mrs. Zimmerman (Cate Blanchett), a good witch who lives next door. And it turns out that Jonathan is himself a warlock! "Are you a good warlock or not?" Lewis wants to know, and by this he means "Are you nice or evil?" Jonathan's response of "Well, not that good" works as a reply to the better question of "Are you talented?" Jonathan is Jack Black–ishly rather inept. Because of course he is. (If this reminds you of the terrible 2015 Goosebumps movie, which also featured Black as the silly-eldritch center of ooky horrors, this is much better. Much.)

Gentle humor of this sort is what House sings with ... and also a gentle uncanniness and a mild subversion. This is a stepping-stone to counterculture notions of alt-fantasy. Lewis' world is just the teensiest bit steampunk. He favors goggles, of which I approve, and living your best life even if that means you're gonna be an outcast eccentric. If there's one overarching theme here, it's "embrace your weirdness," which Lewis is invited to do — and does! — via his new life with his uncle and his delightfully strange friends.

The title of The House with a Clock in Its Walls refers to the clock ticking down to doomsday that was installed in the walls of Jonathan's house by another warlock, a very bad-as-in-evil one. But the most sublime aspect of the film is the fact that it was directed by Eli Roth ... horror schlockmeister Eli Roth, he of the appalling Hostel movies. Roth here hits an unexpected (for him) sweet spot between cloying and spooky, one that finds joy and acceptance for an oddball child in magic and mystery.

Roth manages to blend some deeply unsettling (though still PG-creepy) imagery with nicely old-fashioned eerie: foggy cemeteries, esoteric books. He crams a lot of stuff into this movie — the production design alone is bulging with giddy opulence — but somehow it all works together, particularly thanks to the terrific cast. While Blanchett vamps it up deliciously, Black tones down his mania, and they meet in a comic middle that is perfectly pitched. (Vaccaro is much better than many child actors, too.) Somehow, probably in spite of itself, The House with a Clock in Its Walls ends up totally enchanting.