Though he's been a leading man for more than 40 years, Sam Elliott has had a strange kind of celebrity. From almost the beginning of his career he's been a walking Marlboro man at a time when cigarette advertising declined to nothing, an unmistakable Western hero who emerged exactly when the Hollywood Western was becoming extinct. Though he appeared in dozens of films and television series throughout the years, his image is somehow bigger than any of his performances, and what is probably his most memorable — I'll avoid the cliche "iconic" — role was barely more than a cameo in The Big Lebowski. With his steady, warm drawl and bushy mustache, he's the Westerner as archetype, a cowboy hero without a vehicle.

The slight but enjoyable new film The Hero gives Elliott ample room to play on that image. He plays Lee Hayden, a well-remembered but underemployed Western star. Estranged from his family, he's facing his old age with relaxed bemusement, making a comfortable living recording advertising voice-overs and hanging out with a stoner friend (Nick Offerman) between jobs. There may be miles between the character and Elliott's own off-screen life, but it suits his personality well enough to be a comfortable fit. 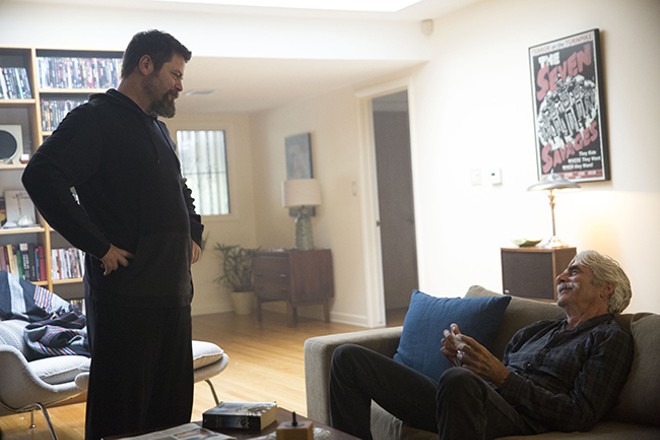 As co-written and directed by Brett Haley, The Hero is content to stand back and give its subject room, less a drama (or more precisely, less a melodrama) than a laid-back glimpse into its protagonist's life. Early in the film, Lee learns that he has pancreatic cancer, but like nearly everything in the film, it's presented unemotionally. Even when Lee finally tells his ex-wife (played by Elliott's real wife, Katharine Ross) about his illness, Haley keeps the camera at a respectful distance and the conversation off-screen. For better or worse, this is a film that avoids highs and lows. It's about getting by.

Although Lee's diagnosis looms over the film, it remains marginal. The most extended narrative element is a lengthy sequence in which the actor travels to receive a lifetime achievement award at a small-town ceremony. It's a strange and bittersweet occasion, with Lee reacting simultaneously like a mischievous child and a tired survivor. He works the crowd, smiling through that mustache in a way that lets you think he's seeing through the pretenses of every person he meets. When he finally hits the stage, slightly drunk, he delivers a rambling, humble speech before finally choosing a woman in the audience at random and handing her the award. It's an awkward, potentially embarrassing scene, but Haley turns it into a quiet triumph. He cuts to a close-up of the woman carried away with joy, and the moment becomes a validation of both Lee's anti-stardom speech and his awkward attitude to his own celebrity.

The Hero depends so heavily on Elliott's personality that it inevitably slips whenever it tries to follow a conventional narrative path. There are heavy-handed moments, as when Lee auditions for a fantasy film whose characters reflect his own strained relationship with his daughter. Laura Prepon is a welcome presence as a younger woman who briefly becomes involved with the actor, but she also provides the film's flattest note when she performs a stand-up monologue about him the day after they've slept together.

For all its narrative weaknesses, The Hero is a pleasure to watch, depending on your degree of involvement with Elliott and his cowboy persona. Having already served as an emblem of the past, Lee now reluctantly becomes an emblem of his own image, and both actor and character treat that inflated image with a kind of tolerant exasperation. The joke hidden within The Hero is that what the aging star represents isn't really the old Western sensibility; it's the twilight of the baby boomers. After a career setback, he doesn't walk off into the sunset — he takes some psychedelic mushrooms and hallucinates around his yard. For a brief second, The Hero lets us see the real person behind the rugged hide of the Marlboro man and the open horizon of the Hollywood Western as a hazy pipe dream.